Is the search function broken?

I seem to get very inaccurate results. For example:

When I search for Bruno Nicolai it turns up 1 result: Eugenie De Sade '70 (April 8) within soundtracks section, yet I’ve posted about 5 of his albums within the soundtrack section. It doesn’t even show the album I have just recently posted.

When I filter the results - posted by me, I still get the same.

I’ve noticed this previously but didn’t pay too much attention to it. However, I would like the results to be accurate, so people don’t need to wade through months of posts to ensure accuracy.

I’ve noticed something similar when trying to find posts for unavailable Qobuz tracks yesterday. Was expecting to have to wade through loads of results and got next to none instead. A bit of an anecdotal contribution but this sounded very familiar…

Moved to community thread.
@moderators can you advise?

Discuss the company Roon Labs LLC here. This is for questions and commentary on the company itself or its formation.

I would hope wherever it is placed by a mod (& clearly here is not the right place according to the above)) that this is answered rather than ignored by a mod/techo/support person within Roon.

Given it was moved, a mod has therefore viewed it without response. This in effect is @support but not software related, rather the forum itself!

That’s for the #roonlabsllc category, admittedly the #roonlabsllc:meta is a subset of it, but don’t take the hierarchy too literally … this is a good place for your question (and better than unclassified where it was moved from).

Given it was moved, a mod has therefore viewed it without response.

Not at all, trust level 3 users can also move posts, as was the case in this instance.
Also remember that mods don’t work for Roon we just help to keep the forum managed.

Your question will need to be investigate by the Roon tech team that runs this site, you have tagged @support to get Roon’s attention … there is little more to do from the mods.

Thanks Carl - your explanation is appreciated.

Just out of interest, can you test the search function please? Perhaps use my test example above and see how many Bruno Nicolai it turns up for you. 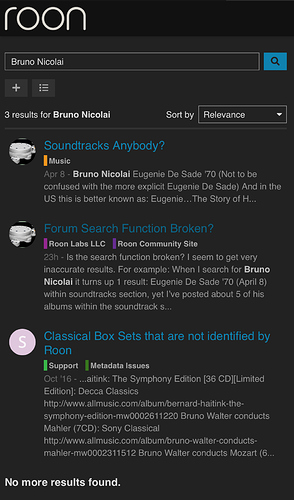 Thanks Carl - just as I thought - broken.

It’s turned up Bruno in this thread, but I’ve posted 5 Bruno within the soundtrack thread.

I moved the thread here as it’s the closest to talks about the forum I could see.
In your postings did you type in Bruno’s name or use the share function or both?

No worries about moving it ged. I had no idea, hence uncategorised.

As per Carl I can only get 3 results now (1 from this thread here). I’ve tried numerous advanced search features, it makes no difference. I’d have thought ‘posted by’: Nostro may have helped. That doesn’t help and still turns up the post from 2016 that was another Bruno & not mine!

I also assume if I don’t get ‘proper’ results or anything close, this would be the same for all other users & most likely are completely unaware.

I was trying to see if you had explicitly typed in the name into the posts you are searching for or had posted an image, which wouldn’t be indexed.

He did type the name in text in the forum. The odd thing is that when I displayed all his posts in the Soundtracks topic in a single web page, and then used Ctrl+F to search for the text in Microsoft Edge, it also didn’t return any hits…

if you had explicitly typed in the name into the posts

I’m not sure what you mean here ged?

I title my posts on the basis I had assumed they’d be searchable, rather than just posting an image. On a few rare occasions, I may have posted only an image for reasons I don’t recall now.

Edit:
sorry I misread what you wrote - yes, explicitly typed!

Actually - he used Bolded text - but that shouldn’t make any difference?

Thanks Geoff - yup, I like bold so that I can more readily find my posts when scrolling.

So searching with and without my user name added.

Not sure if that’s the case, given if returns some results but not all. I guess that’s a possibility, but that would apply to any other forum & I don’t think (but can’t confirm), if I’ve encountered this problem previously.

Notwithstanding, I’m not a forum member anywhere else these days.