Franz Xaver Süssmayr as "Top Composer" for Choral Music? Are you sure?

Roon lists Franz Xaver Süssmayr as a “Top Composer” for Choral music. All this guy ever achieved, was writing a couple of bars of music to complete Mozart’s Requiem - using Mozarts existing sketches / inventions and based on his instrumentations. By most music scholars, he did a pretty daft act on it, the reason why today often other completions are being preferred.

I took Süssmayr off from the Mozart Requiem Composer credits. But that does not change the situation. Any idea how I can get rid of that guy?

Scrolling to the right, I get John Rutter. Ok, He wrote some jolly Christmas songs. But where is Benjamin Britten? If a Brit should get credit, then he surely is “more Top”. And who the heaven is Kim André Arnesen ?? 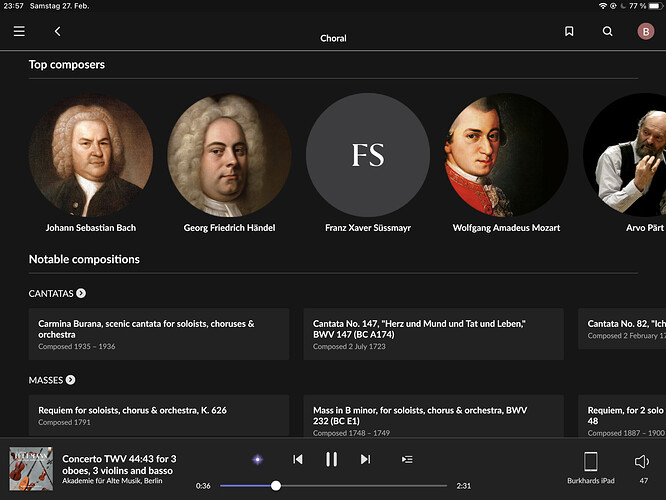 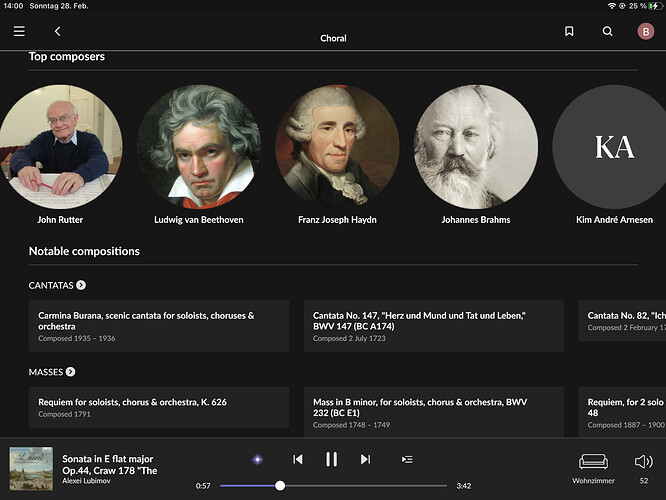 This information is auto-generated based on plays in the community. Kim André Arnesen is a Norwegian composer, featured on the 2L album “Magnificat” that was nominated for a Grammy for best surround sound. I guess that album has been played a lot by the audiophiles here…

The entire Top Composer/Conductor/Performer thing is flawed due to bad data or a bad algo.

And sadly, Roon Labs has decided this should get top billing on the page. This should really have been moved to the lower part of the page in smaller fonts/pictures.

And, in spite of many threads about this, it has not been commented on by anyone at Roon, at least that I can find.

Thanks. That may well be, still doesnt make him „Top Composer“ Just like that trumpeter I got the other day is no „Top Performer“ of Chopin

Of course not. That would be way too sophisticated.

At the moment this is mostly a huge pile of rubbish. I agree entirely that this Facebook/Instagram-lingo does not work at all here.

Not sure what the purpose of this Top Composer section is either. I had more luck with the recommended albums section just above it. A Christmas album of Tallis and Byrd from Stile Antico popped up and that opened up an interesting chain of recommendations. Its not recognisably modern holiday music so that’s ok.

I try to keep my genres roughly aligned with allmusic which roon is also using as a framework.

So, both “Vocal” and “Classical” are top-level genres. But “Vocal” is reserved for pop. In contrast “Vocal Music” is a sub-genre of “Classical”. I try to keep those distinctions in my tags as my library is very hybrid and I listen to a lot of styles not just Classical. I then set for example, Choral, Lieder, Cantata, Oratorio etc. as sub-genres of “Vocal Music”.

That quickly breaks down with roon. So when I look for Top Composers in Vocal Music I get Mozart and Schubert mixed up with David Foster and William Ross who also have “Vocal Music” credits (not mine). These are arrangers for the likes of Celine Dion (Titanic). Barbara Streisand, Whitney Houston etc. But when I change their credits from “Vocal Music” to “Vocal” it makes no difference.

I’m not sure what I would use these Top Composer recommendations for (maybe with less familiar genres they make sense), but what I don’t like is the way that the genres are mixed up like this. Roon seems to weight these genres quite heavily (along with other factors) as I notice pop/classical bleeding across genres into each others radio picks and other discovery and recommendation logic. That is annoying.

„Choral“ is an „official“ Roon Genre / Sub-Genre. Got even a little text written up on it. So its not some „obscure“ genre naming convention causing this to happen. 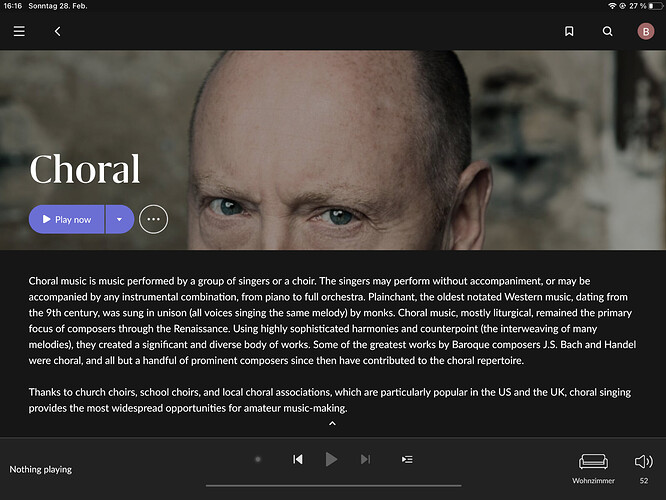 Yes, I don’t get very sensible results for Choral either. But if I broaden the search to other classical vocal categories I am getting even worse results. Looks like there are very basic things wrong underpinning the data model and basic logic and their relationships.

For example, I get Chopin as a recommendation for Vocal Music ?!

So Chopin I imagine is a very popular Composer in roon libraries an he is a very famous (Piano Music) Composer, so that must put him on roons radar as a “Top Composer” of some sort. But he only gets a “Vocal Music” credit because he wrote a handful of Lieder you find on these big box “Complete” anthologies.

Out of curiosity I tried “Symphony”. Not a very adventurous list. All the usual suspects. But also the top Symphony composer “Friedrich Gottlieb Klopstock”. Who on earth is he? As far as I can see he wrote the text for Mahler 2. So he gets a top symphony composer billing along with Mahler.

A lot of basic issues popping up it seems to me with the way that roon handles classical “voice” and the relationship between composers / lyricists.

The Primephonic guys/girls are doing a much better job here.

There are 50 composer “bubbles” that you can scroll thru. All of them make perfect sense. No Süssmayr, no Jan-Andre Something, No Chopin…

But of course Tallis, Dowland, Byrd, Britten(!) - All in the list! (Sorry, no John Rutter this time… 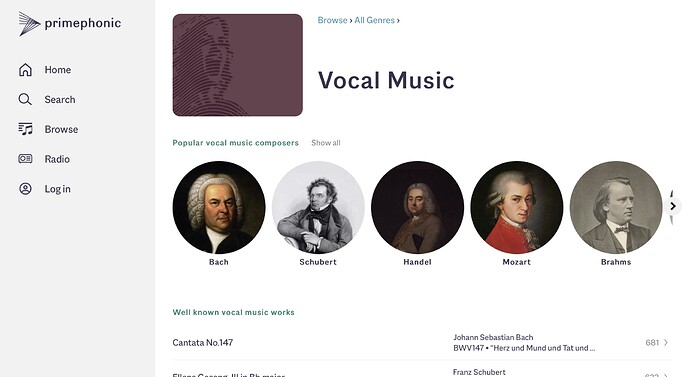 I look forward to the revisions. I do really like Roon and use it daily. It has resulted in my discovering some great music that I may not have found otherwise.

Coming late to the thread and replying both to the OP and to this ^.

That’s my beef with Roon’s library management even the vaunted Classical Music management. THIS ^ is not knowledge. Is just statistics. Obviously Suesmayr “standing” comes from his Mozart’s Requiem completion and its popularity. Same for Klopstock - he is the author of the verses of Mahler’s Resurrection… so it gets picked up with it, given that the metadata credits him. True classical fans with real knowledge do not do this - yes, they know Klopstock did that. BUT - not a factor in our libraries…

Unfortunately, not sure if this will ever be solved to my satisfaction… not with public metadata - just give us the option to have our metadata as the only source of truth… purty pls!

Yes. Roon will have to give us the oprion to switch this cr@p off. Without human curation this will just never be right, as you say.

And I thought it only afflicted Classical - just noticed this:

Artist: Mike Oldfield, Manor Choir, Nasal Choir… REALLY? I mean, these are half joke credits that are not RELEVANT. Tubular Bells should be credited only to Mike Oldfield. Period. I mean, if it had Mike Oldfield and Viv Stanshall, I would be a little less critical… but even then, it would be wrong. Anyone who knows only credits Mike Oldfield. Period. This is just strange… and obviously purely algorithmic, with no smarts at all…

That said… I still like Roon… but the library management… man…

ya sometimes this gets a bit insane. In another thread a user with rock & country collection was wondering why he has Beethoven showing up as a composer. The answer likely being that some guy guitar-improvised on the Ode of Joy or the „Ta-Ta-Ta-Taaaa“ of the 5th symphony…

🥸. And you never know whether that Nasal Choir will make it to the Top one day