A custom pc with USB Connection into various dacs depending on how I feel.

Chromecasting the currently playing track. Worked fine for a while but now the single Shield Device I have shows up multiple times in the roon server display settings and none of them work 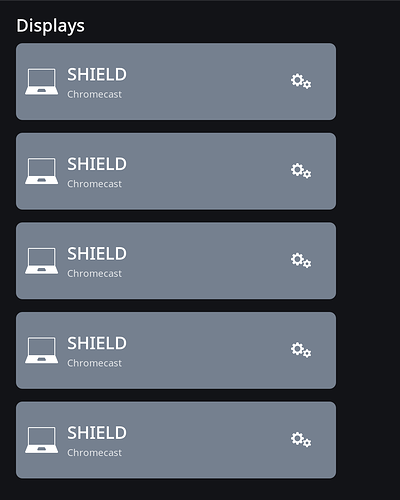 Have you rebooted everything?

I would definitely start off by rebooting all your devices, in this order preferably:
Networking Gear -> Core -> Shield. After a reboot, does the Shield only show up once and works as a display?

roon running in a virtual with 8 of the cores and 12gigs ram. OpenMediaVault (linux) OS

If the behavior is still the same after a reboot, would you have a standard non-VM Core you can use to temporarily host Roon on? Does the same behavior still occur there? Note: Just as a precautionary measure when performing this step, I would advise creating a Backup of your database.

I returned to the VM because its about the only situation where I can get the display to work at all. On a smaller dell 310 server the display starts but freezes immediately after. This dell is relatively meaty so not sure whats happening there. On a customer PC which is somewhat weak it also freezes. I have also tried with a standard chromcast thingy.

I could reboot on the weekend and see what happens, but this is essentially enterprise gear so it would be a shame to have to constantly do that. But I’ll give it as try.

This may have begun after a recent shield update, so it could be that!

Thanks for the additional info. I would definitely try a reboot of the gear as I noted to see if that changes anything.

Also, can you confirm that displays still work as expected in other types of browsers such as Chrome and Firefox?