The new Gustard X16 DAC arrived today. That’s got to be a record from Shenzhen China to my door in just less than 48 hours! Good on you DHL - outstanding service. £20 import fees were due before delivery.

The box itself is a solid feeling metal device with a (very) small mono display. Settings are fairly rudimentary - will tinker over the coming days and months. Left it all at defaults for initial testing. I quite like that you set the display to “auto off” and then pops up every track for 10 seconds or so and goes off again.

So I now run a Gustard X16, using a pi4 and VitOS as the Roon endpoint backed off to a NAS/Tidal Hifi account.

The Gustard is currently doing the full MQA decode - may change that later. Seems to work as advertised with test materials. I also get up to DSD512 playback now in addition to MQA full decode (my prior DAC didn’t support either). I can also send Bluetooth from the phone if needs be - bonus, if a somewhat crappy quality bonus… it supports Bluetooth protocols I’ve never heard of.

Externally this DAC feeds using RCA into a Cyrus XPd QX preamp (with outboard PSX-R) and then a Stereo200 hybrid class D amp hooked up to B&W 702S2 speakers… Interconnects and speaker cable are homemade 99.99 silver stranded (look up TweakerMan on YouTube).

I will try using the Gustard to drive the amp directly using balanced XLR in due course as I need to make a cable up to test that.

The DAC itself sounds “crispy”… (that’s good). The highs are delicate and articulate with the bass hitting the lows whilst retaining presence without getting stodgy and bogged down. The sound stage seems more focused with singers more upfront and stage center than before. I run B&W speakers and they don’t have a wide sound stage - this remained basically the same with no sudden amazing projection of sound further to the left or right than before.

I am waiting on a Mark Levinson 5101 from the US for delivery in Denmark at the 5,000 euro mark but I got fed up waiting due to Covid delays. The Gustard is at the 500 euro mark for immediate delivery from France and has everything like DSD and wifi my old DAC does not. Wow! Wow! Wow! Very difficult for me to imagine the Mark Levinson will be worth the 10X incremental price. Let’s see when it arrives.

Turns out that it stacks nicely with components from Topping, like their Pre90/Ext90 preamp stack. 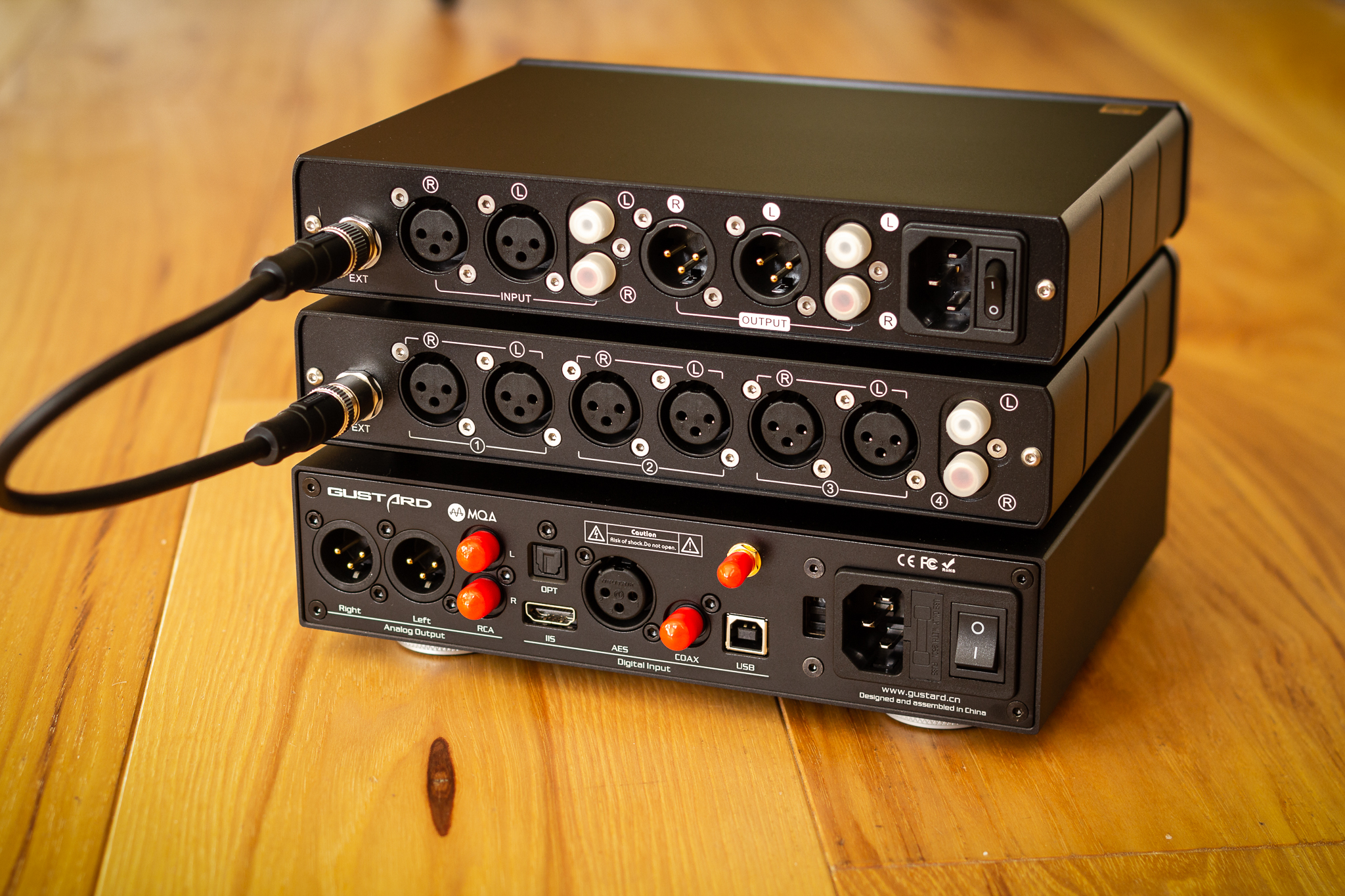 I can confirm that, when being used as a full MQA Decoder, the X16 supports gapless playback. This album is my “torture test” for gapless MQA because this piece has lots of short tracks, played live with no gaps: 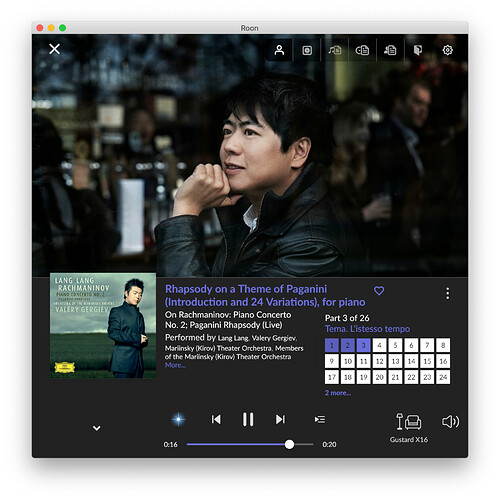 Sadly, when Roon is doing the first unfold and the X16 is just acting as MQA Renderer (eg., with volume leveling enabled in Roon), there are three or four faint “ticks” between track changes. When I look at the display on the X16, I see it flickering between “OFS” and “PCM” in synchronization with these ticks.

I’m actually not sure if this is a problem with Roon or the Gustard. In contrast, my iFi DACS, including the NEO iDSD have significant gaps between these tracks. These results are from the USB input, but I may re-test with S/PDIF.

Edit: I’ve re-tested. Same results over S/PDIF. Of course, I can’t test MQA Full Decoding over S/PDIF since the X16 only does the full decode over USB. I was able to verify this lack of functionality. If I tell Roon that my Allo DigiOne Player zone is an MQA Decoder and Renderer, the X16 reports 44.1/48 kHz PCM instead of “MQA” or “OFS” when streaming MQA.

I initially found the Mark Levenson very disappointing with the default filter. I changed it to an apodizing filter and that is at least acceptable. My guess is that filter is similar to the Eximus DP1 I was using for a long time. I do get a SACD player, but there is no USB digital in, so its not really usable with HQPlayer, no RAAT and a very flaky UPnP implementation. Hope there is a firmware update soon. A far from “premium” experience. Should have done my homework.

Usability issues aside I am only aware of differences between the two initially when I was doing side by side comparisons. The ML I preferred for pop music, seemed slightly weightier in the base. The Gustard I preferred for Classical, particularly Choral as although a little less weighty in the bass it is slightly more refined and delicate in the mid-range.

Only used the ML for a few days. More or less given up on it. Its not bad. But overall its not in the same league as the Eximus DP1 it was supposed to replace, it barely matches the Gustard on an apodizing filter and it has a lot of usability issues. Steer clear.

‘Stress’ testing my Nucleus and burning in the Gustard X16 this morning. Not a single issue with integration. I’ve connected the X16 directly to the Nucleus, and it recognizes all native features. The X16 connects balanced to the AAA789 HP driving the HD820s. Playing Rebecca Pidgeon from the Nucleus SSD indicates DSD 5.64MHz. Naturally it sounds superb. I paused the play while another endpoint is active with Tidal, and raised the AAA789 gain to maximum - dead silent. I was not personally concerned about direct USB connection to Nucleus. This completes my recent upgrades to GigE connected Nucleus, WiFi connected SMSL SU-9 (ProJect S2 Ultra) to a Parasound HALO, and USB connected Gustard X16 to the AAA789. Everything went together seamlessly, and is working as advertised. Now having native MQA (SU-9), and native DSD and MQA (X16) is a big plus for audio and network utilization. Very pleased.