I’m using Chromecast to connect to the Harman Kardon speakers.

I’ve bought a set of Harman Kardon Citation One Duo speakers yesterday. They sound pretty good.
They work fine with my iPhone and the Apple Music app on my MacBooks.

I’ve set them up in Roon. And Roon identifies both speakers as AirPlay capable. And it also recognizes the group I’ve made in Google Home to have them play as a stereo pair.

Last night everything worked. But without changing anything now when I try to play music to the Chromecast group I keep getting the “Audio device refused to switch input to Roon” error. My speakers mention “Something went wrong. Please try again.” message. This happens when I select the group as output on both my MacBooks and my iPhone SE.

I’ve tried restarting the speakers. And I’ve tried to restart my MacBook Air, which acts as both Roon core and music player in the living room. To no avail.

If I select one of the speakers as an output through AirPlay. They work fine. But it seems the Chromecast group is borking up for some reason.

Any advice would be appreciated.

Do you have any devices or Apps that you can test with the Chromecast that isn’t Roon.

Also is there an app (besides Google home) that you can test with theses. Most non Apple software supports casting through Chrome so try playing some music from there.
Also if there is a native app then check for any firmware updates.

I have to say it doesn’t sound like a Roon issues, but a device issue not switching inputs.

Another thought, do you have any phones or other devices connected to the speakers as they could be locking the device open.

After setting up the speakers yesterday and installing Google Home. The speakers both got updated to their latest firmware versions.

This morning I’ve done some experimenting. I’ve noticed in Google Home, that after unpairing the speakers as a stereo set, that one of the speakers didn’t show up anymore. So I’ve set it up again. At the moment Roon has been happily playing for a few hours now. 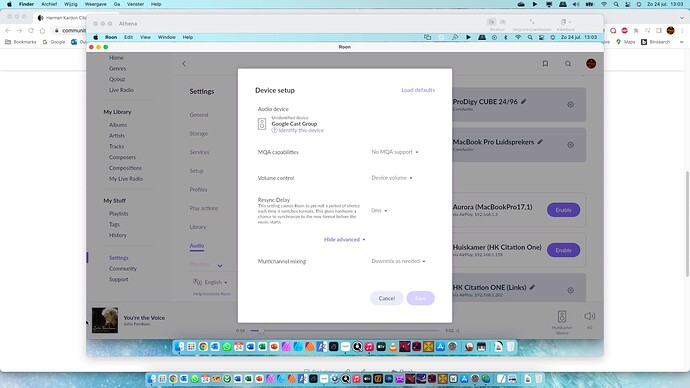 This is what the Roon Core sees as the output that I’m using. Using Screen Sharing to remotely login to my MacBook Air from my M1 MacBook Pro.

As long as it is working again, and stays working.
Apple does not see Chromecast, due to the not invented here issues. Most music apps on Apple do though besides Apple music, and only through Chromecast.
Hopefully it continues to work