Has been "adding music to library" for days

**Description issue:
rotating icon in upper left has been going for days
has been adding music to library for days now (40 songs) 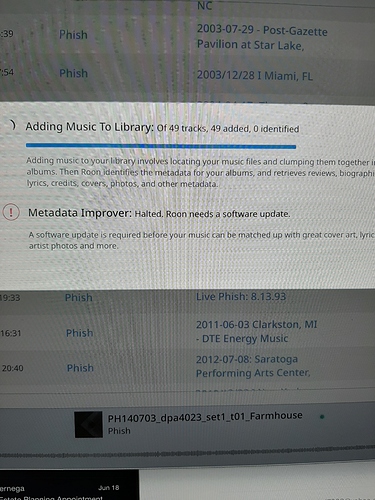 I have the same issue. I have a Roon Nucleus and a Quobuz subscription. The ‘Add to Library’ function for Quobuz albums has stopped working recently. All I get is a message informing me that it is taking longer than usual and that Roon will keep trying in the background. But nothing happens. Very frustrating!

Thanks, @thomas_clark1, that solved my issue.

I was going to log a ticket here as I was experiencing the the same or similar issue. Then I saw the previous post about restarting the NUC. I did that and it solved the problem. Here are the details of my issue below in case it’s helpful to anyone.

Since June 15 or 16-- around the same time I did the latest Roon update–I have attempted to add albums to my library, but they never show up there. These have been albums both from Qobuz and Tidal. I checked each of those apps to see if the albums were being saved from each streaming service, but they aren’t there either. Oddly, one of the handful of albums I attempted did successfully save (TLC’s Crazy Sexy Cool from Qobuz). I tried logging out of Tidal and Qobuz and then logging back in. This didn’t resolve the issue. I have never experienced this problem in my years of using Roon.

I followed Thomas’ advice and rebooted my Nucleus. It updated itself and the problem cleared. Thanks for the advice.