Have to Reboot Nucleus Every Morning

Ever since the update before this last one, when I bring Roon up on a new day, I get the message that it cannot read my database and to restore a backup. But if I reboot the nucleus instead, everything works fine until the next day.

If you check my history, I have database problems more than once a year - when you do major upgrades.

First, are you shutting down your Nucleus every night and restarting it the next day, or are you having to reboot manually due to the database issues? How long have you had the Nucleus?

Can you share a screenshot of admin screen of your Nucleus? It does not appear your Core software is an issue but rather your database, but the issues may be related or it may be the drive holding your database in the Nucleus.

But if I reboot the nucleus instead, everything works fine until the next day.

I get the message that it cannot read my database and to restore a backup.

Because your database has become corrupted. You should restore from a backup and if that doesn’t work, start all over with a fresh database.
You may also choose to use the restart workaround every day until the system eventually totally breaks and doesn’t start at all.

It is conceivable this is a failing M.2 SSD. Mine began as running no longer that 14 days between reboots (my present NUC numbers 100+ days between OS reboots). These became more frequent until it was only running for hours at a time.

I do not shut it down at night. I just have to reboot in the morning.

It started two upgrades ago.

I firmly believe that my problem is hardware. I have to rebuild my database from scratch once or twice a year. This is my 3rd year with database corruption issues occurring a couple of times a year after an upgrade

Attached are screenshots of my admin and backup screens. 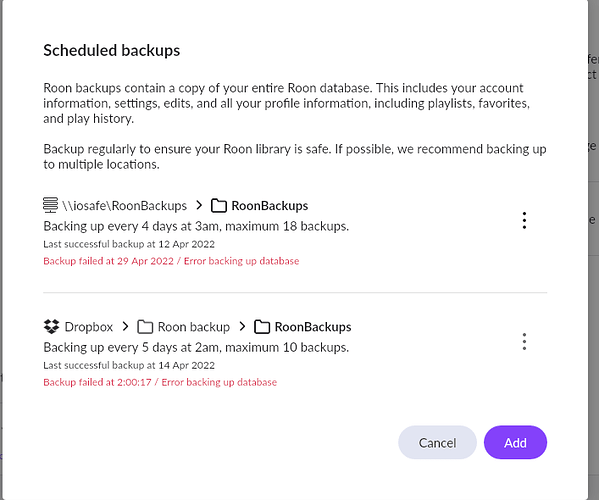 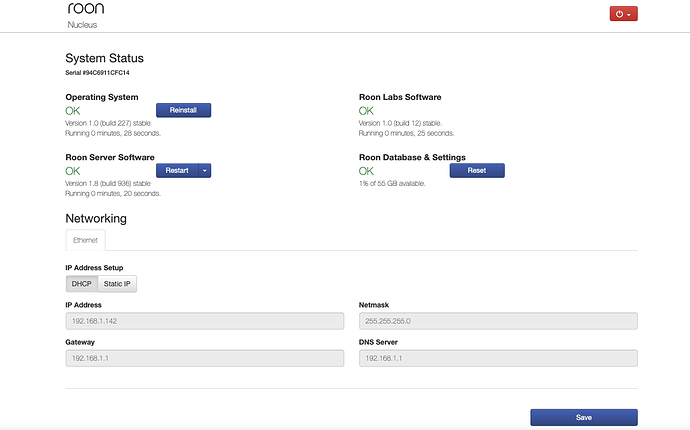 Richard, just one last check, although it seems you probably have a hardware problem. Do you have an external USB drive to which you can try to save a manual backup just to confirm that this has stopped working?

Also, do you remember the last time you had to rebuild your database and possibly the Roon version you were using?

REBUILD DATABASE HISTORY
Last “old” RoonServer I created was 2/5/22
I also had to create them:

USB DRIVE BACKUP QUESTION
To create the USB backup, do you want me to attach the USB drive directly to the Roon? Currently it is connected to my MacBook Pro.

NEW DATA POINT
I noticed this morning, that the Nucleus does appear on my network in the morning. I have to reboot it so that it shows up and I am able to access the Nucleus.

Thanks again Richard. Yes, it would be useful if the external drive were connected directly to the Nucleus, but the external drive it cannot be formatted as a Mac drive (either HFS or HFS+) as the Nucleus cannot write to these types of drives; exFAT, NTFS, and other types of formats also work with Roon. It definitely is acting as if there is a hardware issue somewhere in the Nucleus.

I don’t know anything about external drive formats, but I had two that I tried:

I directly connected a

In both cases, I got the “creating snapshot of your database” message and it looked like it was working and then I got the same “cannot load database” error screen. 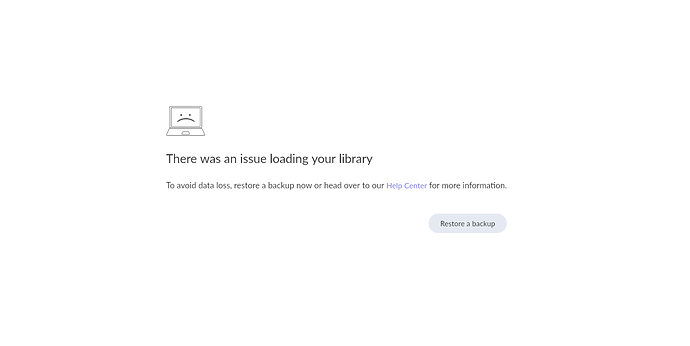 If it is a hardware issue, what is the process? I love, love, love Roon, I have had such trouble with my nucleus in the past 3 years it is getting tiresome.

There appears to be a number of problems here, some pointing to network issues which may be the source of the problem.
As a former Linksys Velop user I often experienced erratic or obscure behaviours, usually problems accessing various devices and/or using Roon. On these occasions I restarted the velop network which almost always resolved my problems (many hours spent with linksys support never resolved the root cause).
So, if you haven’t done it yet, power off your devices try restarting your Velop network & the power everything back up (if using a separate router reboot that as well), It only takes a few minutes and can save a lot of “headaches.”

I reluctantly dumped my Velop network hardware but everything has been stable since.

The most recent one I guess. What would be the reason to choose something older without need?

I am not able to restore from any of my backups. It says it cannot find them, though I can see them there. I had to build my database from scratch again. How do I get my nuclear repaired or replaced?

I assume by contacting your dealer.

Will do BlackJack, thanks!

Ben here with the support team. I hope all is well, and you have my sincerest apologies for the delay in my response. We’ve made some recent changes to the support team structure and some reports have experienced a longer response time than usual.

Since some time has passed I wanted to touch base to get your current status. If you’re still experiencing this problem and need assistance please let us know. I noticed you mentioned earlier that you are not able to restore your library from a backup, is that still the case? If possible, could you try restoring your library from a backup, and then try to create a new backup using that one?

If you are still seeing this issue, please share a timestamp of when this issue is occurring and I can have our technical team take a deeper look into this.

I have stopped using the Nucleus. I was not able to make a backup or restore from a backup.

The retailer I bought the nucleus from talked to their Roon contact and the suggestion was to replace the SSD. So I have this on backorder. I was told a 64MB would be fine, but I figured doubling that would not hurt. It is suppose to arrive the 2nd half of June, then I will have my SF retailer (Music Lovers) replace the SSD.

What brand did it have in before?

Thank you for the update! When you do get your Nucleus back, we would advise you to do a database restore from the proper-functioning library you now have set up on your MacBook Pro. That way, you can be confident the restoration won’t be coming from the library causing issues the first time around.

I don’t know Transcend was just what the Roon contact for my stereo store recommended, so I assume the same, but with just 64MB.

@benjamin My nucleus is back with the new SSD and I restored the database from my MacBook Pro core.

It’s only a few minutes but all seems to be working. YAY.