Over the holidays I bought a pair of Bose HearPhones for a relative who uses hearing aids. I thought they might be a more robust solution for some places where hearing aids might be otherwise be required, but they turned out to be a mix of tech that would be too cumbersome for non-technophiles. So I found myself the proud owner of some interesting tech. I’m sharing some info on them, as I know there are other folks here with some hearing loss.

To begin with, these are rather oddly shaped Bluetooth earphones. They are not audiophile earphones – you can find a full review here, complete with frequency response charts. However, they are packed full of various Bose technologies, like ANC and other DSP. In the hearing-aid world, these kinds of things are known as “personal sound amplification products” (PSAP). 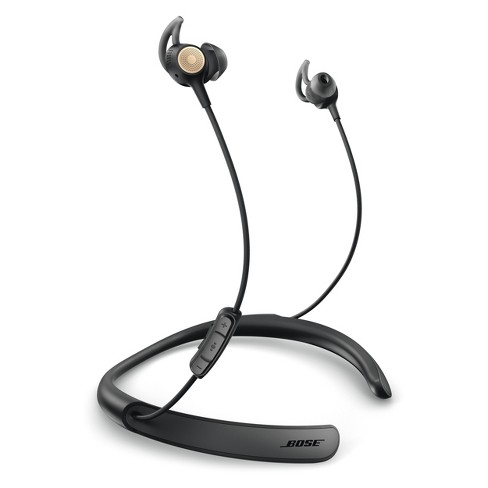 Microphones at the front of the buds, batteries in the neck torc, control pod on right bud wire. Good fit in the ears, easy to wear. Sound is reasonable, but not hi-fi.

Turns out these go back to a purchase by Bose in 2014 of a company called Ear Machine, and its founder and chief technologist, an experienced audiologist named Dianne Van Tasell. She had previously developed a “self-fitting” system for “open-fit” hearing aids, which required no audiologist session to fit a new pair of hearing aids. In late 2016, Bose announced HearPhones. In late 2018, Bose was awarded a so-far-unique approval for de novo status for the Bose Hearing Aid, a self-fit hearing aid designed for mild-to-moderate hearing loss. This device, which apparently built upon the technology in HearPhones, has apparently not come to market yet. In late 2019, Dr. Van Tasell retired from Bose.

So, we can all speculate on the future of Bose in the hearing aid market. Turns out the FDA is cooking up some rules for over-the-counter (OTC) hearing aids, but those won’t be out for a year or more. As this could completely disrupt the current hearing-aid provision market, there’s lots of chatter about this in hearing-aid circles. Perhaps Bose is waiting for that OTC ruling. Or, given Dr. Van Tasell’s retirement, perhaps Bose is not going forward with this.

Back to the HearPhones. There is a smartphone app that “tunes” them. The controls are interesting. There are two major control points, World Volume and Directivity (I think they mean “directionality”). World Volume is a boost/reduce function for the ambient sound around you. Normally set to zero, increasing it will amplify ambient sound, while reducing it below zero will kick in the ANC functionality and dim out ambient sound. Directivity has three settings: “everywhere” – sound from all around you; “front” – sound from front and sides, while sound from behind is reduced; and “focus” – sound from only the front, sides and back are reduced. In addition, there’s a third control which lets you adjust boost/reduce for each ear separately, so you could boost a bad ear, or turn off noise from one side where there’s some annoying person talking loudly. Finally, in the Hear app, you can also adjust bass and treble boost to provide some equalization.

The pod on the side of the right earphone cable contains some buttons which allow you to adjust World Volume and Directivity, and can also be used to control music listening and phone calls. But these latter functions are done via a bewildering assortment of counted pushes and holds on the World Volume and Directivity buttons, so I doubt anyone would actually use them.

I intend to use these a bit and try them out. I think there’s an interesting opportunity in this market to put together some truly hi-fi PSAPs, with real equalization measurements to fit an individual’s hearing patterns.

Check out the Aumeo products as well: