Hector Berlioz - The Complete Works - Not

Unfortunately, instead of appearing as a multi-disc box set, this appears as a single album with 424 tracks. Roon has an upper limit of 180 tracks per album, so how do we play it? 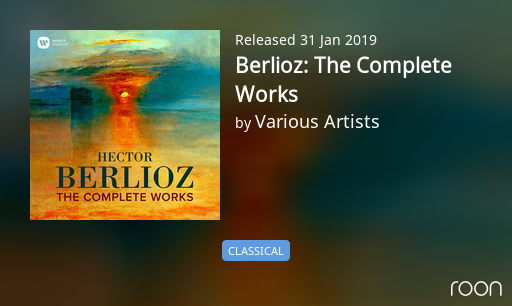 Just a thought, not tested!

Can you add all the tracks to one or more playlist(s) in the Qobuz app.
Your Qobuz playlists are available in Roon
Dirk

Ha! - Indeed, I can create a Playlist with all 424 tracks. It’s not a great solution, because now it’s just a list of 424 tracks, instead of a series of works and performances, but until Roon ups the album limit, it’s the best that can be done. Thanks!

There is another way. There are 27 discs so you can use “fix track grouping” to split it up. Main problem is that doing it is beyond tedious. I often do this with smaller boxes where the digital download is just one long album. 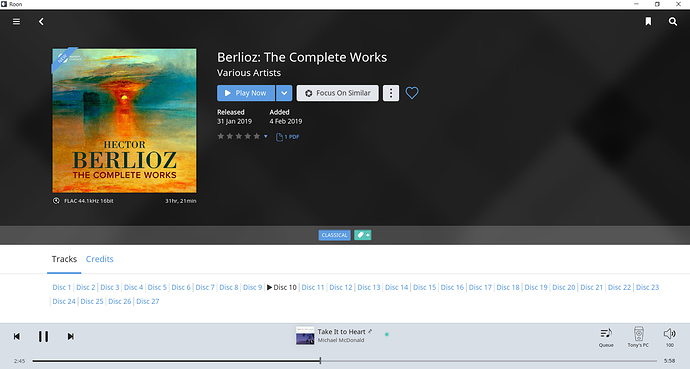 How come you’ve got 27 discs on this Qobuz album? Did you already do the splitting?

Yep. This is a Qobuz album split. Roon seems to let you do a lot more editing of on-line streaming content than I thought. You can group multi-parts as well that are not coming through correctly.

Not clear; was this a purchase or an off-line download? Doesn’t the latter disappear when you log off Qobuz?

No, this is an on-line album, added to my library. I don’t have a copy locally. I assume that means that Qobuz metadata is added to my local library and a pointer to the storage on Qobuz. But it also means I can edit that library entry. Roon doesn’t seem to care if it is local or streaming partner. It is persistent when I log out of roon but obviously I would loose everything if I lost or corrupted my library.

It is possible to group on-line content as well. This album (Qobuz) for example has no titles at all. Just the parts and so nothing is grouped. I just edited the first part of each group and roon then automatically grouped the rest of it where there were sequential roman numerals. I don’t know if the same thing works with decimal numerals or if it works on Tidal: 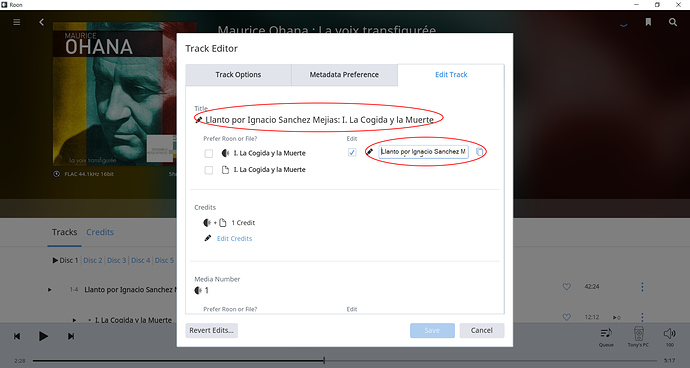 If only we could share these kinds of edits…

I’ll have to listen to Berlioz from afar. Sounds a lot like work to me.

I think there is some kind of systemic issue with Qobuz causing these types of problems that is being addressed now by roon. I am a new Qobuz subscriber and I am certainly noticing missing disc nos. and titles to multi-part works.

@joel in this week’s new releases I’ve sampled 3 albums that have missing track info (metadata): [image] [image] [image] This metadata is crucial for classical music, as without it I can only guess which is which. Any chance these issues will be resolved for the complete Qobuz database? I have not stumbled upon this phenomenon when I use/used the Qobuz app.

Had to try at least once, not gonna repeat it. At least I know how it works now.

The next thing you will discover is that this complete Berlioz set has no composer credits. Not a single one. Once you have fixed that then you will need to fix disks 18, 19. After that disc 20 fixes itself for some reason. I would say you will have deserved that bonus if you get that far.

Some absolutely marvelous music on this box. Check out the lighter stuff like Priere du Matin, H. 112 on Disc 12 (no. 172 for the rest of you).

Yeah. Roon has split the titles wrong but if you edit the titles (all of them) with this you will get a composition id:

For some reason, roon shows some mercy and when you have done that for 18 and 19, roon figures out how to do it for 20.

Cranky, that’s something for tomorrow

It took me about 5 minutes to create nine separate albums (my own album groupings - with complete Cellini and Trojans as separate albums - not those of Warner) - using a laptop rather than a tablet. All the tracks now appear in Roon. They appear to be correctly grouped into compositions - so should not be a problem when I come search and to listen. After all, when we attend a Classical concert we listen to a particular composition, not an “album”

We are aware of the limits to the number of tracks that can be displayed on the screen. When we redesign this screen we will be addressing this limitation, but I don’t currently have any timeline I can provide for this. In the meantime, you should be able to see all of the tracks via the Track browser for this album.

Thanks for the report — We appreciate the feedback!