@Eric and @Greg, I just had an astounding discovery. On the back of Hegel H360, there is a tiny switch called USB A/B. It was set to A in my case, and I switched it to B. Voila! Now the MacOS recognizes it as a device up to 192kHz and DSD64, and I am now able to play DSD over DoP.

In the Hegel manual, there is absolutely no explanation of what this USB A/B switch is about. Furthermore, it is still unable to handle 384kHz/352kHz or DSD128. Since I don’t own any of these higher res files (there are not too many on the market anyways), it works fine for now, but it still contradicts published information (192/DSD128) on Hegel’s website. I will further verify this with Hegel.

Thanks for the prompt responses. Your support team is great!

Hi Andrew (@hgim82) — Thank you for the follow up and glad to hear about your discovery! I hope the folks over at Hegel are able to answer some of your questions for you. Happy listening!

I have my H360 set to USB B. Hegel’s states that its HD30, its top end DAC, and the H360 integrated amp/DAC both play DSD64/DSD128. I have installed the DSD driver (Core Media) from the Hegel website. The Audio MIDI utility shows up to 192kHz, but it will not stay set at that rate. Also, DSD64 is in yellow, and DSD128 is red. Screen shots to follow. 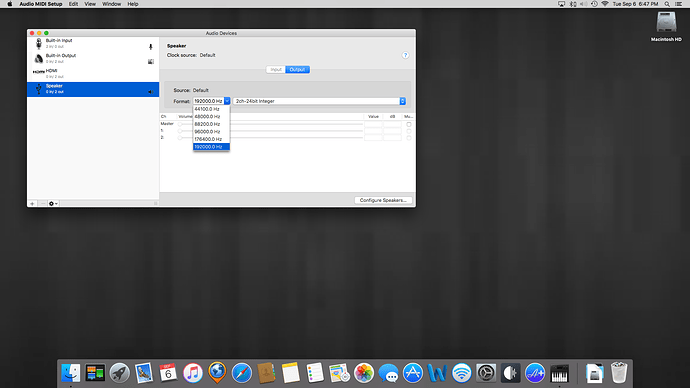 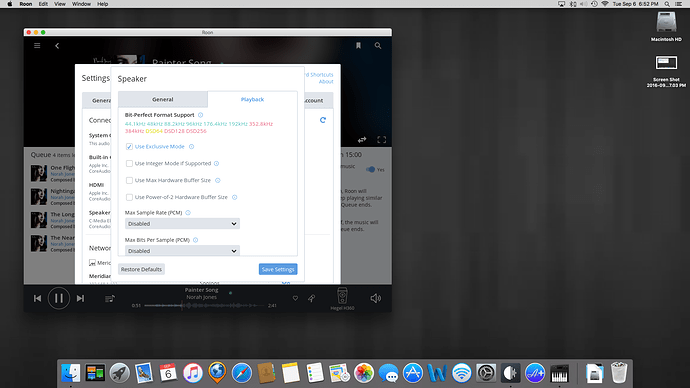 @Kevin_Camel, I think you just need to set the DSD playback option to DoP. The Midi setting doesn’t stay at 192kHz but it adjusts to the source file you’re playing. It looks like you’re all properly set up except the DoP option.

I have communicated with Hegel. They said it will still play DSD128, although there are hardly any such files on the market (I don’t have any) so I cannot confirm.

thanks, Andrew. I did make that setting. Audible difference? I can’t say right now. I don’t have any DSD128 files either. Looking for an album worth buying.

But Norah Jones, whose recorded vocals on Come Away with Me sound like ringing a bell even played from my iPhone through bluetooth on my car stereo, sounds utterly amazing on the H360 (DSD64 over Roon on my mac mini). Just stunning. I’m glad I waited for the H360 after longing for the H300 for a couple of years. Performs as advertised with many playback options.

Glad it helped. I also enjoy H360 immensely. It sounds so clean and neutral - not a hint of cloud in the sky. I wouldn’t be mistaken for tube sound, but it’s a different kind of pleasure, especially the bass and dynamics.