I just got Hegel H360 and connected my Mac Mini’s USB output to Hegel. Turning on Roon, however, it is seen as “speaker” (C-Media something), and only plays up to PCM 96, but unable to play DSD files, native or DoP. I went to Hegel website, downloaded and installed the DSD Apple driver, but no avail. My Luxman DA-06 and Meridian Explorer, etc. were all picked up by Roon automatically without any problem. What should I do? Is it a problem to be solved by Roon or Hegel?

Hi @hgim82 ---- My apologies for the trouble and the slow response here. I’d like to gather some information from you so I can better understand and evaluate the issues you are experiencing. Please see below. Thanks!

Hi @Eric, thanks for the reply. Attached are the screen shots for the audio settings (I named it “Hegel”).

As I said, I have installed the DSD driver downloaded from the Hegel website (see below).

Let me know how we can resolve this issue. 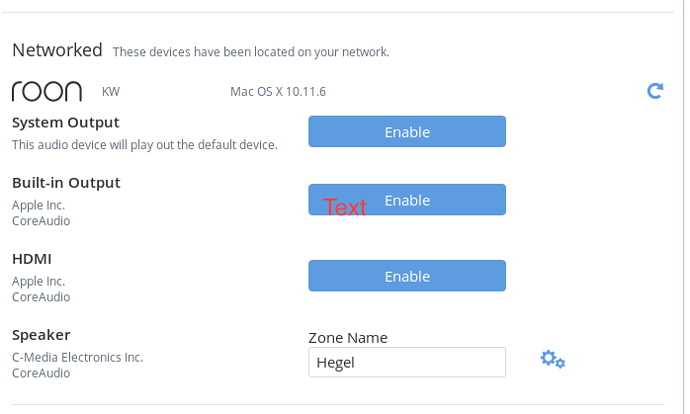 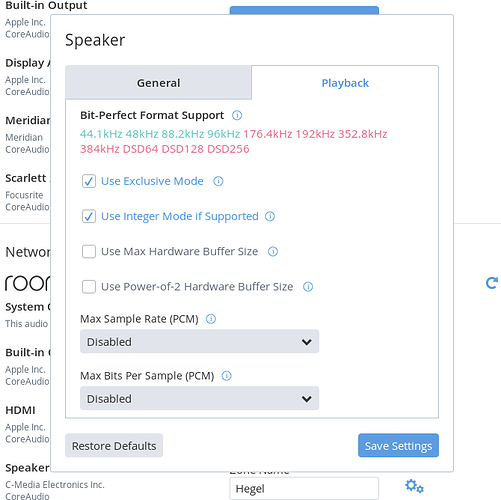 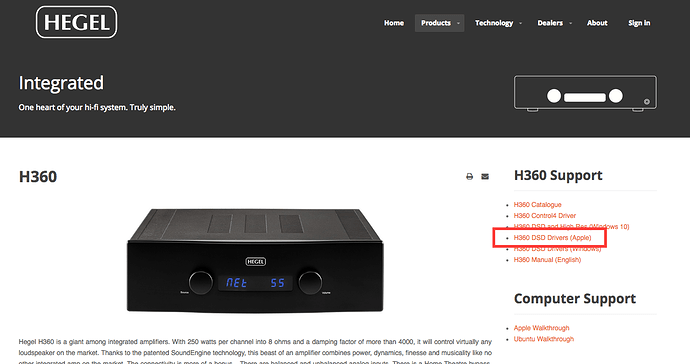 Also, the following screen shot shows that a DSD64 file is processed down to 88.2kHz (not even 96kHz as shown above). 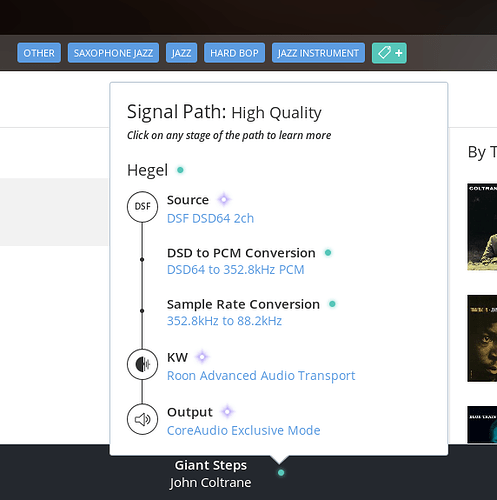 I am currently updating my notes as I have this issues slated to discuss with my team. Just to confirm, so I am understanding this correctly. You are not running into this playback issues with any other devices and it is only isolated to the Hegel H360, correct? Thanks!

@Eric, that’s correct. I bought Roon in Sep. 2015. I have been using Luxman DA-06 as my main DAC and also Meridian Explorer and Focusrite audio interface have been in the network (although they have not been in major use with Roon). All of them had no problem functioning as they should, i.e. on exclusive mode each device shows their maximum capability correctly (e.g. Luxman up to DSD128, Meridian up to 192kHz, Focusrite up to 96kHz). Hegel H360 was the first one showing that it is limited to 96kHz PCM unlike its published specs). I read that Luxman DA-06 had some issues earlier, which must have been corrected before I purchased Roon.

Upon installing DSD driver from Hegel, it states that it was confirmed to work with Audirvana and JRiver, but no mention of Roon. Were there any reports on problems with other Hegel integrateds or DACs? Or maybe it is as simple as just making Roon recognize H360 as DSD DAC and send the native files without downsampling?

Hope that you’ll figure it out soon.

any word on this issue? I have the same setup and same problem

Hi @hgim82 ---- Thank you for the follow up and clarification. Your insight has been very appreciated! As mentioned, I have discussed this issue with my team and our developers have requested the following: 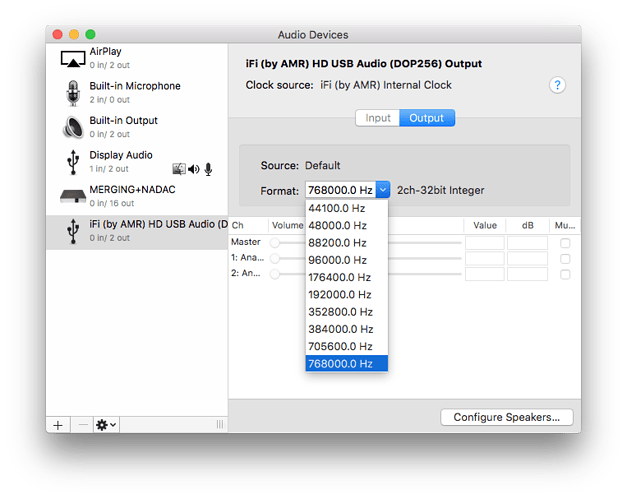 @Eric, this is a screenshot taken from my MacMini (the network remote machine directly connected to Hegel). My Server does not show any “speaker” device. As you can see, the format is limited to 96kHz. 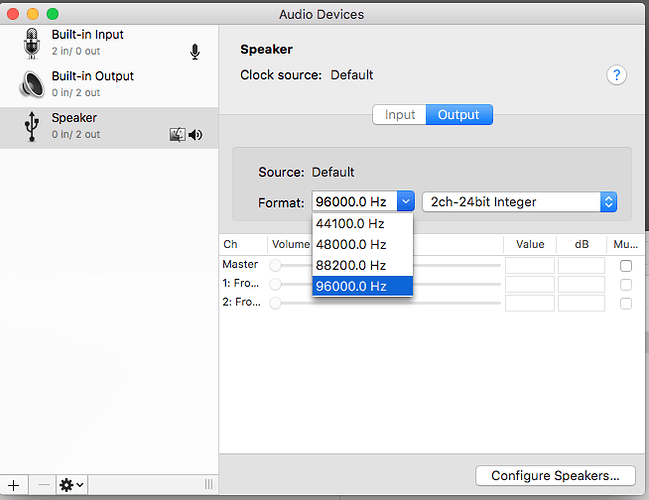 Silly question, did you install the driver on the machine directly connected to the Hegel? The screenshot is something I would expect to see with just the Hegel plugged into the computer via USB (without the driver).

@Greg, yes I think so, installed and restarted the machine, but I’m not sure if it did anything. Normally it should show some kind of new application in the applications folder, but I don’t see any changes. Is there any way I can confirm?

It’s unlikely to be in the Applications folder.

Unless you trashed it, check your downloads folder for DSDAppledriver. Probably couldn’t hurt to reinstall.

@Greg, Just reinstalled and restarted the machine, but no avail. Is this the problem with the driver?

I think you may have to check with Hegel and see if they have been able to get Roon playing DSD with their driver.

Unless there are any other Hegel users on this forum that can help out.

This is from the instruction *.rtf file found inside the driver folder. It says the driver was tested with JRiver and Audirvana, although I don’t understand why the driver installation should be specific to the music software, rather than the basic midi function. 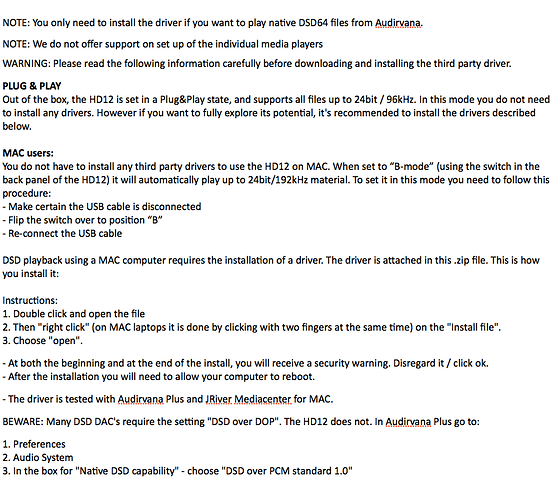 @Greg, one more update. I just tried out Audirvana (I also bought it), which also recognizes Hegel only up to 96 kHz. So Hegel’s claim that the driver works with Audirvana is incorrect. I will have to check with Hegel. I will keep you posted. Thanks.

Hi @hgim82 ---- Thank you for the follow up and the screen grab! Based on this most recent information, I am getting a very strong feeling that this is a driver related issues.

Roon can only use formats that Mac OS tells us about. We ask Mac, “what rates does your device support” and it is coming back with that list that was seen in the provided screen grab. As you know, we need bigger rates (176.4k, 352.8k) to do DSD playback so it’s not working because Mac OS isn’t telling us about the device.

My thinking is that this device supports both USB Audio 2.0 (the current standard) and USB Audio 1.0 (the old standard), and for some reason it’s initializing with Mac OS in USB Audio 1.0 mode (USB Audio 1.0 max sample rate is 96kHz) and not 2.0.

Our developers have seen cases of this in the past that were transient—i.e. power-cycling the audio device, computer, or both which caused it to re-initialize properly but most of the time it indicates that either the wrong driver was being used, or something was in fact going wrong with that driver.

Have you considered reaching out to Hegel directly to see if they’ve had any success playing back DSD content via Roon with their driver(s)?

Hi @Eric, no I haven’t contacted Hegel yet, which is what I will do. It is now pretty clear that the driver is the problem. I will follow up and will keep you posted.

@hgim82 ---- Thank you for the quick response. Definitely keep me updated as I am curious of your findings. If anything else comes up just flag me down and I’ll have a look for you. Thanks!

Hi @Keven_Camel, could you also check if your MacOS shows the same problem with your Hegel after the driver installation? It will give me a convincing case when I talk to Hegel.

I also wonder other Hegel DAC users’ experience. But then perhaps H360 is the first model from Hegel with DSD capability…