I’m using Roon via iPad to Synology NAS Core server connected to the Auralic Aries G1 via Ethernet then via USB to the Chord Qutest DAC. My Router is a Netgear D7800 fibre router

Unable to configure to playback DSD natively. I have a number of devices connecting to my Core but the one I need help with is using my Auralic Aries G1 which connects via USB to my Chord Qutest DAC. I’m not seeing an option through Roon to play DSD natively. It only offers convert to PCM. My Chord Qutest DAC used through my Auralic can and does play DSD natively when not using Roon. How can you enable me to change the settings to stop it converting to PCM?

Welcome to the forum! Can I please request that you post a screenshot of your Device Setup tab, outlining the various DSD output options you have listed? The Device Setup tab should look something like this and can be accessed by right-clicking the zone name in the bottom right -> device setup: 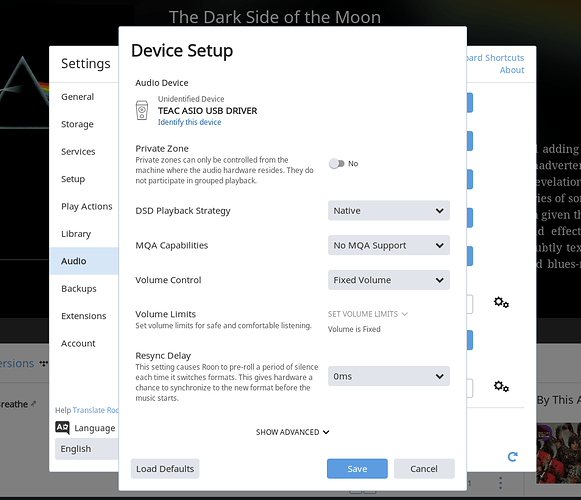 According to Chord, the Qutest only does native DSD via the ASIO driver from an attached Windows computer. All else is via DOP and limited to 256. Perhaps you should send Chord tech a note to verify exactly what your unit does and does not do. 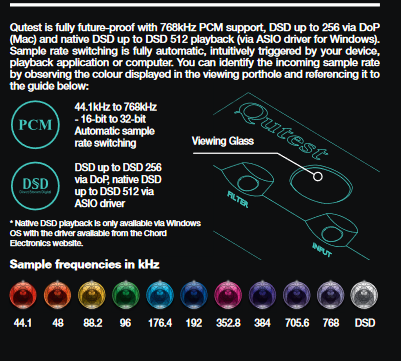 If native is what you want, then your option is to build a Windows PC, load the ASIO drivers and then attach the Chord via USB. Sounds fantastic by the way, I have heard that combo in a friends setup. And that also means you’ll finally be able to enjoy PCM at 705.6 and 768. Aries is limited to 384 PCM over USB. 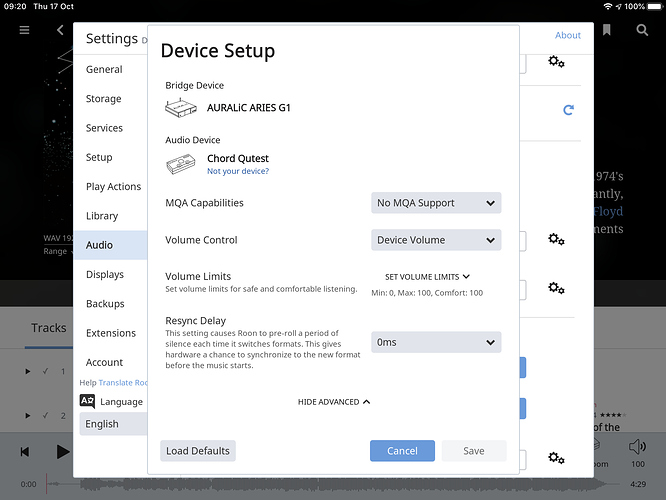 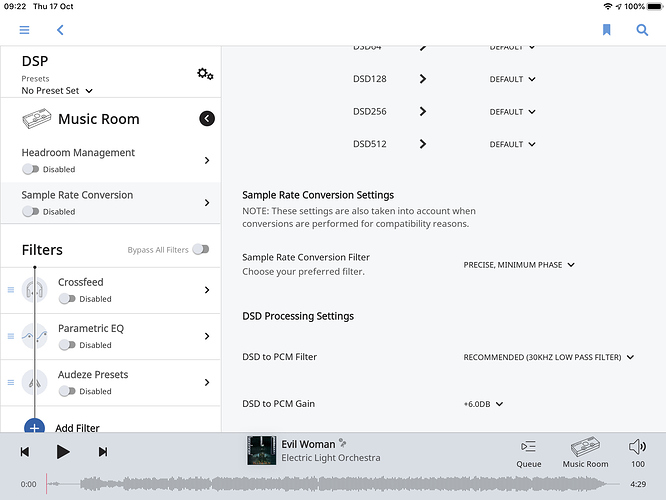 Rugby
When I used my Lightning DS app to play DSD my Chord DAC which is connected directly to the Auralic Aries G1 via USB plays the DSD signal and the “Clear” LED lights up as expected, However, when I use Roon i get a dark blue or purple light lit which suggests conversion to PCM.

The clear LED lights for either native or DOP DSD, I believe. I just sent an email to Chord Support for clarification, will let you know the response.

i get a dark blue

I think that there are two separate concerns. The main one, I think, is “why can’t I get DSD (DOP or Native) to play from Roon”. The question of whether it is DOP or Native is secondary to actually getting DSD played at all.

Roon queries the DAC to get a list of supported options and then presents only those options in the Device Settings. If you are not seeing a DSD setting, then Roon, when it is doing it’s querying, is getting told that DSD is not an option. The most likely culprit is your bridge device because it stands between Roon and the DAC.

So, I would suggest as a test, to move your Chord and plug it straight into the Roon Server via USB and see if you get the DSD options.

though… remember, once you get Roon sending DSD (native or DoP doesn’t matter) to your Qutest (and it has to as it was working fine here with a similar setup: Aries femto -> Qutest)… it will internally convert DSD to PCM

had a long debate on this matter, on CA, and was pointed to a Rob Watt’s post on Head-Fi where he “clearly” speaks about “decimation”
among Chord DACs, Dave only does true DSD processing

Try connecting the Chord directly to the Roon Core server via USB. This helps isolating the problem.

Enable sample rate conversion and you will see the DSD options

Only if your DAC can do DSD.

I cannot connect my Chord Qutest DAC into my Synology NAS which is in another part of the house away from my Hi-Fi equipment.

That’s interesting as I have no problems when i use my Auralic to play DSD files into the Chord Qutest DAC when i use the Auralic Lightning DS app. I’m beginning to think that if i want to play DSD i will need to switch to Lightning DS app, which is a shame as Ive just bought the Roon Lifetime membership and i had been so pleased with all the other enhancements which Roon provides.

In order to get DSD playback working to the Chord Qutest DAC, you must disable the “Software Volume” option in the Lightning DS settings for the ARIES G1 or on the ARIES G1 itself.

I apologise for not reading your recommendation carefully.

I checked my Lightning DS App and discovered that volume control was enabled. I disabled it and i now find that I can play DSD files correctly,

The email I got back from Chord techs said I was right in that the “DSD” light will light up either playing native or DOP.

Linux (which the AuraliC uses) can only play DSD via DOP. This means that you will be capped at DSD 256. If you want native playback you need to use a Windows PC with the drivers.

In addition, DSD is really meaningless to Chord Qutest since it doesn’t really play DSD internally, it converts the DSD signal into PCM anyway before it turns it into music. So whether Roon turns it into PCM or it does it itself is the same thing.

Thank you fir your additional comments. I’m now much happier as because I followed John’s volume disable recommendation my DAC is now working as before, I appreciate it may be limited considering your comments but i feel this has now resolved my problem so we can close this thread if you want

DSD is really meaningless to Chord Qutest since it doesn’t really play DSD internally, it converts the DSD signal into PCM anyway before it turns it into music. So whether Roon turns it into PCM or it does it itself is the same thing.