I just got started with Roon about two weeks ago and I wanted to share how it’s going.

A bit of background if anyone is interested: I’ve loved music since I was a kid. When I was younger, I liked to collect records, cassettes, and CDs. I started collecting digital music when it become mainstream in the late 90s. Hoarding huge collections music was common, but in those early days I could see that few people cared about keeping things clean. Albums were missing tracks, names were inconsistent, and everything was generally very clumsy. But I figured out how tagging worked, and then in the mid 2000s I learned about FLAC and proper ripping techniques for my CDs. I started my collection over from scratch, which wasn’t so bad since all those old MP3s used terrible encoding anyway. This time I would actually try to curate my collection, taking meticulous care to properly tag, catalog, and sort my files.

I did it this way for years, using Winamp, foobar2000, and MusicBee for playback, until recently, when streaming became too difficult to ignore. Everyone has their own story with how they got into streaming, but at the end of the day, here I am with Qobuz and Roon to happily merge a high quality streaming service with my own personal collection in a single application.

The merged concept is way better in practice than it sounded when I first got started. I’m positively delighted at how easy and seamless it is to have Qobuz albums side by side with my personal collection. I particularly like that I can easily manage different versions of albums and edit metadata preferences. It’s clear that the team cares about this stuff.

Exploring artists and album information is truly excellent, and I’m happy to see the talented writing staff from Allmusic appears extensively. I am a novice with classical music, but it’s such an amazing thing to be able to hop around to learn about performers, arrangers, and composers while listening.

The recommendation engine is fantastic. I’m discovering great new things every day. Now I know what the fuss is all about, and I’m looking forward to years of discovery.

Obviously I’m new, and I realize that 1.8 is also new. Nevertheless, I wanted to share a few things I would love to see in the app.

More artist photos. Being able to scroll through great pictures of artists is such a satisfying experience, and makes listening so much more engaging. Maybe even include an option to add our own artist pictures.

Add a “stop after current track” option. It’s hard to overstate how often I used this feature in foobar and MusicBee. I really miss it. I frequently listen to music while I’m doing other things. It’s nice to be able to say, “after this track ends, I’ll take a break”, and get an auditory clue (silence) that it’s time to take the break. While yes, I can continually check the progress of the current track, but that takes away my attention from what I’m trying to do. It becomes tedious when the track is long, and then when it’s getting close to the end of the track, I basically have to stop what I’m doing and watch it so I can stop it at the precise time. The feature was also great for separating very long tracks during focused listening (for example, an album with two 30-minute drones). Maybe I’m being too meticulous about this, but I feel like Roon was made for meticulous people.

Add a scrollbar to the album view window. Using the mousewheel to scroll through the album page is fine for short releases, but for larger releases and boxed sets, a scrollbar is absolutely a requirement.

Browsing record labels (outside of my library) would be awesome. This was one of the first things that struck me about the Qobuz app, and it’s something I’ve always wanted.

Add taskbar playback controls for Windows 10. This is where you hover over the taskbar icon and the preview window has prev, pause, and next buttons. Roon is the first player I’ve used in modern Windows that doesn’t have this feature. It’s not the end of the world to bring the entire app to the front, but I wanted to point this out.

The app crashes a fair bit. I’m sure you’re aware of this and are hard at work fixing it. It seems to happen to me most often when I’m toying with the library. There’s also some general library weirdness, where often I’ll be looking at an album that is in my library, but it shows as if it is not in my library.

I’m also very curious about how the genres and subgenres are built. I love the recommendations I’m getting by exploring subgenres, but I have noticed that on lesser-known releases, they can be pretty extremely generic. I have a fair amount of experimental music in my library (things like musique concrète, tape loops, field recordings, etc.) and a lot of it is simply labeled Pop/Rock. If there’s a database I can contribute to, or if there’s some way I can use my own tags as subgenres, please let me know.

Anyway, that’s it for now. If you’ve made it this far, thanks for reading! I’m looking forward to exploring more, and everything that’s to come in Roon’s future

Welcome Sheb to Roon world.
Glad you are finding the experience positive so far.
Really like some of your suggestions and maybe someone will move this or part of this to the feature request section.

A very well thought out and worded first post I must say!

Add a “stop after current track” option. It’s hard to overstate how often I used this feature in foobar and MusicBee. I really miss it. I frequently listen to music while I’m doing other things. It’s nice to be able to say, “after this track ends, I’ll take a break”, and get an auditory clue (silence) that it’s time to take the break. While yes, I can continually check the progress of the current track, but that takes away my attention from what I’m trying to do. It becomes tedious when the track is long, and then when it’s getting close to the end of the track, I basically have to stop what I’m doing and watch it so I can stop it at the precise time. The feature was also great for separating very long tracks during focused listening (for example, an album with two 30-minute drones). Maybe I’m being too meticulous about this, but I feel like Roon was made for meticulous people.

There is a Roon extension that does this which is worth looking into, it’s my most used roon extension. Have a look in the “tinkering” section. [Queue Bot]

There are multiple feature requests about pausing after the currently playing track or pausing at some point in the queue, without destroying the queue. More than a year ago I posted an idea on how this could be done, but never found a need or the time to actually implement this. But now that we are forced to stay at home… So here it is, the Queue Bot. It consist out of two parts, an extension that can be installed via the Extension Manager and an album that can be downloaded. Setup Install t…

Oh that’s great, thank you! I almost forgot that Roon has extensions. Pausing at a specific point in the queue would be even better. You could use it for things like classical albums with multiple compositions that are separated into different movements.

You can easily add the Queue Bot pause track after the current track (play next) or to the end of the current queue (queue) and then drag it to any specific point in the queue you want. Bookmark the Queue Bot album so you can go to it quickly.

It would be better if Roon simply added an option to the three dots menu by each track in the queue to add a pause after or before that track but until then Queue Bot works OK.

Two things. You can add your own artist images through the edit menu. You can add an internet link or you can browse for an image in local storage. Second, there is a scroll bar on the album page. It’s just quite small so you probably didn’t notice. Sorry, three things. You can use your own genres. Under settings/library/import settings, select no for use Roon genres and yes for use genres from file tags.

Indeed, it’s very useful and quite - [I can’t really think of the word I want to describe it - so here is a screen shot] 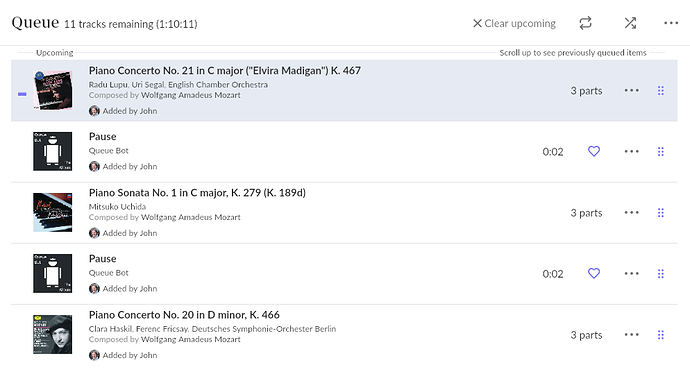 Thanks David, those are good tips. I definitely see the scrollbar on the My Albums screen and many of the other screens in the app, but not on the window for the album I’m currently viewing. Here’s an example. My cursor is over the right edge of the screen but no scrollbar appears. 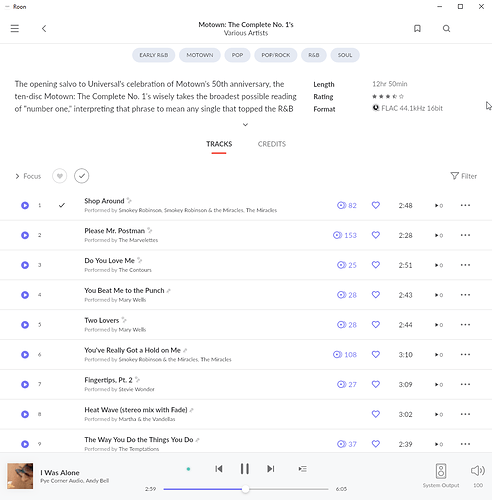 Just a thought, there is a “full screen” button / setting maybe give that a try? Maybe a restart of the app as a test

Okay, you got me there. I rarely use scroll bars anymore. It’s much easier and quicker to use a scroll wheel than to grab and drag the scroll bar. YMMV.

This would be useful but, yes, Queue Bot is out there.

I have a different solution that works when I’m listening to an album. When I want to pause at the end of the track I clear the Queue. To restart I bring up the album and click on the next track using “play from here”. I find this to be a quick and efficient solution.

Awesome first post, Sheb – great overview and great suggestions. And, as usual, great suggestions by your fellow posters.
I started my streaming career on Spotify Premium, then moved to Tidal, and now I’m also locked into Qobuz + Roon. I am Ethernet into an all-PS Audio system – Bridge II board, DirectStream DAC, BHK Preamp, BHK 250 Amp and Tannoy Cheviot speakers. I improved my sound with PSA power regenerator (PowerPlant 12) and two REL subs via high-level connection. Dead silent background. Streaming quality is so good I don’t feel the need to go down the turntable rabbithole. I have all the dynamics + resolution I need for my ears. I mostly use Qobuz 192/24, but my absolute faves are DSD files or on SACD, which sounds crazy-good. Love classic jazz, especially Rudy Van Gelder productions and Blue Note (e.g., Jimmy Smith, ‘Midnight Special.’) I love old Fleetwood Mac/Peter Green, Cowboy Junkies, Knopfler, JJ Cale, Dvorak, choral, church organ, female singers. I am a sucker for “wall of sound” and the Hammond B3.
I remember standing in line at the record store in 1968 to buy my copy of Astral Weeks. Today, I have instant access to all the music in the world at my fingertips – assembled in my own playlists. We oldsters need to remind ourselves how astonishing this is. It’s a wonderful time to be a music lover and Roon is a big part of this for me.