There are multiple feature requests about pausing after the currently playing track or pausing at some point in the queue, without destroying the queue. More than a year ago I posted an idea on how this could be done, but never found a need or the time to actually implement this. But now that we are forced to stay at home…

So here it is, the Queue Bot. It consist out of two parts, an extension that can be installed via the Extension Manager and an album that can be downloaded.

The album has a track called Pause and if you add this track to the Roon playback queue then playback will be paused at the moment the track is reached.

The extension monitors the now playing information via the Roon API and as soon as the Pause track is detected it issues a pause command followed by a next command. The next command takes care that the Pause track doesn’t get played (2 seconds of silence) and therefor doesn’t end up in your play history. 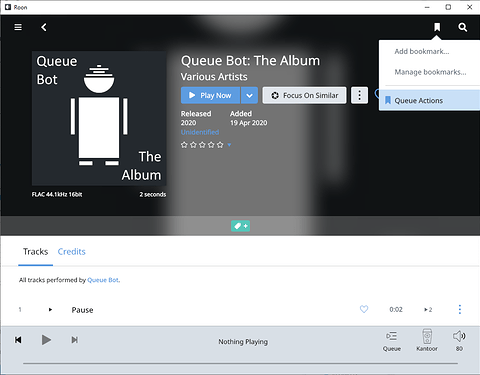 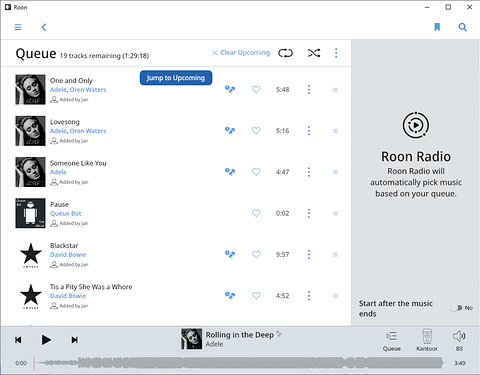 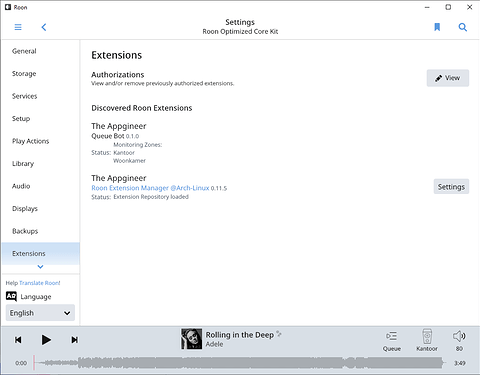 I’ve installed and it appears to work however one unfortunate consequence with Roon Radio enabled, it causes Roon to limit to the local library and of course finds nothing like it to ‘play next’ so that Radio thread dies…

Roon could fix this by looking back at more than simply the last track but I digress.

Thank you for creating it nonetheless.

Can we get “Pause” in DSD512 format? Either way, I think I’ll wait until the remastered special edition of the Queue Bot album.

I’m not much of a Roon Radio users, maybe you can give me some more details on how you are using the Pause track here. Do you insert it in the queue while Roon Radio is playing? Wouldn’t the same be achieved by just turning Roon Radio off, as that also finishes the current track?

Is it always the case that the radio falls back to the local library as soon as an unidentified album is hit?

Well, I only tested the one time yesterday shortly after you released it. I rarely turn off Roon Radio (the function that auto selects the next track, not the Internet Radio).

I did place it in the queue to see if it worked, and it did, the note about RR was simply an observation and expected based on how RR works.

It’s unfortunate that workarounds like these are needed while Roon dev resources are spent to detect and make links out of Internet Radio streams (just one example of a superfluous function in my opinion).

Dev resources? I think those are curator volunteers, fellow users who added and continue to support the addition of live radio stations, not Roon employees. I know I added dozens of stations myself.

I wasn’t speaking of the radio stations, I’ve added a number myself, but the auto detection of artist and track hyperlinks in Now Playing for Radio.

One of the very basic things that is still lacking and has been asked for in numerous feature requests is the ability to sort Playlists by date added, for example. It seems there is a desire to add features that few really want vs. adding basic functionality that is ‘standard’ is most other players.

Well, I don’t want to go off topic, but, yes, there are a lot of things I’d like to see. For me, I’d like more tools to manage and sort my History. at over 26k tracks played, it makes it a pain to sort. Would love a sort by endpoint played to and by profile that played the track, at least.

Well, I only tested the one time yesterday shortly after you released it.

Thanks for the testing and the feedback regarding Roon Radio. I think the conclusion is that this is most suited for local library playback.

Ah but it still achieves the goal of stopping playback after the queue is complete. So, well done.

I’m getting a strange occurrence where the pause track seems to be skipped and the next track played?

The skipping of the Pause track is expected, the playing of the next track is not. Has this happened once, and have there also been occurrences where the pause did happen?

It worked as expected on Bluesound soundbar but not to my Auralic Aries, which is where I originally tried it. Logs below.

Thanks for the logs!

It turns out that different Roon Ready devices behave different on the same control actions, especially when a next is sent while the device is paused, some start playback again other don’t.

I’m working on a change that takes these differences into account but it needs some testing before I can release.

I have an update for you!

Can you update to version 0.1.1 and try again on both devices?
Would be interested to know how this works out.

Same as before unfortunately, Auralic went on and played the next track, Bluesoud paused.
Logs attached.

The log shows that the modification works as expected, it’s only that the behavior of the Auralic is different than expected

Hopefully my interpretation of the log will be right this time. Can you give it another try with version 0.1.2?

For the complete picture. In your tests with Roon Radio active; did you wait till Radio was really activated (showing the next track at the right of the Queue screen) before adding the Pause track?