Description Of Issue
Win10 and roon server is newly installed, roon database is restored from the backup files (600k tracks).

Issue: High CPU usage of RoonAppliance process, There is no analysis in the background. Tried to restart roon server, same problem. But I found that the CPU usage drops to very low when roon remote disconnected (logged out), but still rises to high when roon remote logs in again. 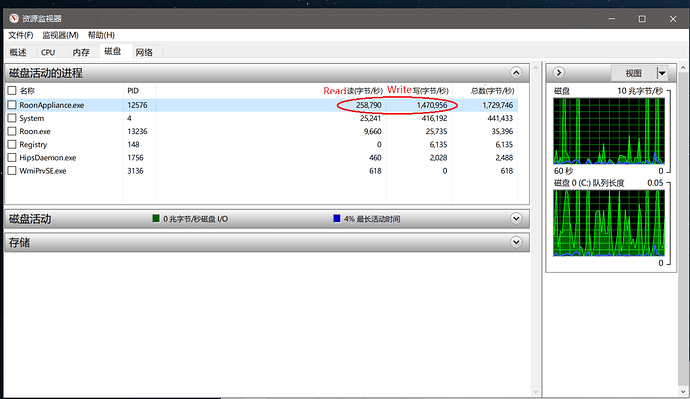 If you had filled in all the information requested someone might have jumped in by now…but its a weekend still in the support world so its just other users that will offer up ideas.

How big is your library - number of tracks? I’m guessing >4-500K based on the RAM in use. if it is very large I would consider sticking another 16GB of RAM in to up it to 32GB total.

Analysis on a large library will take quite some time for a fresh install even with a restore - I would double check in the library settings if this is still happening and how many cores you have selected. I tend to set mine to <=50% of the cores in the system.

Thanks for help.
The library has newly restored over 30,000 albums.
Intel 12400 has 12 threads, 10 selected for roon analysising, because this PC is only used for roon server.

how many tracks? albums tells us nothing

well then expect some CPU usage. the appliance is what the client uses to talk to the server IIRC, I run 10700 cpu 32GB ram and library is 335K tracks…nothing is playing here

I also use fidelizer pro - recommended

If CPU usage is normal, but it is slower than the old roon core(linux e5 2680 v4), when roon loading album or artists detail.

widows/mac have a bucket load of stuff to do that Linux doesn’t - if you want a better experience for Roon run under Linux / ROCK or Nucleus(+). MacOS and Windows have huge OS overheads consider

Thanks for your help anyway.
But 12400 is a more powerful cpu, loading lag beyond e5 2680 v4 is an unacceptable problem. I’ll wait and see the official reply.

Noticing similar issues with RoonAppliance. This is when nothing is streaming and I don’t have any files to be indexed either. I mostly just use it for the core MQA decoder with Tidal to stream to my home network devices.

@Leslie_Zhou You mentioned spikes when roon remotes log in, for me it’s just consitently spiking up to nigh 7-8% CPU usage before going low again.

Roon does a lot of background stuff with metadata updates and whatnot…its a server application. housekeeping is not free

I should add, I was running windows server 2022 data centre edition on this box with Roon and never noticed these spikes. So while I get your point about housekeeping, I’m still keen to understand what’s causing these spikes after switching to win 10 professional; as this is also resulting in core temperature spikes of 80+ deg C

These are fairly normal cpu usage percentages for a Roon Core. Even on the low side I might add.

So you’re saying this is normal?

10% cpu usage for a Roon Core doesn’t seem out of the ordinary, not to say it’s completely normal. Whether you’re happy with that, is a different story.

Maybe you want to look at your cpu cooler. 10% cpu usage shouldn’t cause this high temperatures.

Maybe you want to look at your cpu cooler. 10% cpu usage shouldn’t cause this high temperatures.

Thanks for this, made me realise that the rear fan was set up the wrong way and was also pushing dust in. Took the opportunity to rejig the internals a bit and move the GPU further away from the CPU and streamline airflow. That with cleaning up the dust in there seems to have made the core temperatures cooler. Waiting for additional tower fans and a new CPU fan now to help further.

Back on topic, happy to accept that there will be cpu usage with Roon but keen to understand what leads to these spikes when it’s not indexing or even streaming.

Roon does a lot of background stuff with metadata updates and whatnot…its a server application. housekeeping is not free

I disagree; 24/7 CPU spikes for “metadata updates and whatnot” sounds extreme but it appears I’m not going to get an answer here.
Regardless, the resulting high core temperatures seem to be mitigated so I’ll hold my peace.