The Holo Audio Red is a new streamer/DDC that is about to be distributed by Holo Audio via its domestic, European and American outlets. It is built around the CM4 compute module making it potentially compatible with any software that will run on a Pi 4 platform including Ropieee. Other than the CM4 engine though, the rest of the hardware is all Holo Audio and I love the idea of something as dependable as Ropieee on hardware as capable as Holo Audio. 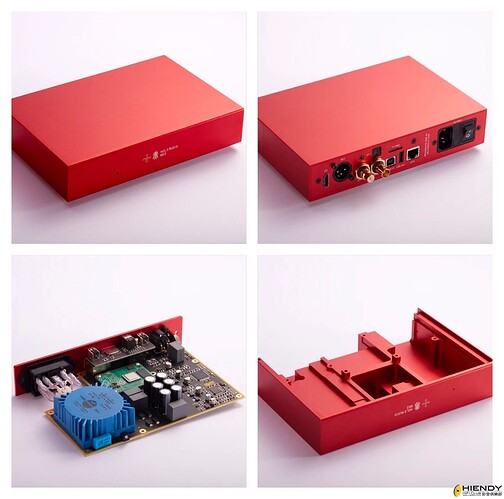 This is an interesting release. I recently switched to Holo Spring 3 (lvl 2) and am now using iFi Zen Stream for streaming, which is working very well and sounds great. Red tempts me but I’m not sure if it gives anything concrete over Zen Stream. It does support PCM768/DSD512 (and even higher) though while Zen is limited to PCM384/DSD256. This only matters when upsampling with HQP though. Also I’m not sure about the red color…

I would like to understand if the USB output is optimised (via external clocks), or simply passed through from CM4 module.

The CM4 is processor and memory only. It literally bolts to the Holo Audio electronics which provide all of the in/outs and power. Holo’s USB implementation is one of the best out there in my experience and that gives me confidence this might be better than my vanilla Pi 4’s. One of the Chinese sites that publishes measurements are pretty impressed.

If only it was in black? Why red it’s hideous.

I do suspect there may be other colours offered at a later date, but right now they’ve called it Red and the marketing is all about its looks! But it is quite divisive, isn’t it!

I have contacted Holo directly to ask.
If there is the addition of galvanic isolation, or high quality clocks, filtering, etc I would be interested. I have no use for the 2 channel outputs. I think it looks rather smart in red.
Black or silver would be nice though.

I’m giving this a go. I can live with anything except blue, being an Aston Villa fan, and I do love the potential flexibility this offers. Delivery around the Lunar New Year. If it comes sooner I’ll be happy.

Nice, let us know how it works when you get it. What do you currently use for streaming?

Interesting. After reading the specs, I see that one can use it as a streamer or as a DDC, but not both at the same time.

Wondering if there is a market for this type of flexibility. It would seem that one sets one’s system up in one way or the other, rather than ad hoc switching between the two.

Seems to answer the company’s need to have two offerings (on the cheap), rather than anything a buyer might specifically want.

Nice, let us know how it works when you get it. What do you currently use for streaming?

I’m using a MeLE Quieter 2D running Linux with Roon Bridge. It isn’t bad by any means but it can be put to good use elsewhere.

Wondering if there is a market for this type of flexibility. It would seem that one sets one’s system up in one way or the other, rather than ad hoc switching between the two.

A while back I built a streamer from a low powered NUC feeding a DDC all fitted in a nice little box. The Red is pretty much the same principle only you still get to use the DDC for other things if you want. It seems to me to add value seeing as this isn’t any more expensive than the other CM3/4 based streamers out there.

HoloAudio “RED” is a Network Streamer with I2S HDMI output supporting DSD up to 1024 and it can be used as DDC (USB to I2S or SPDIF converter) This audio device is using a Pi Compute Module 4 it only uses the Pi4 as core system. It differs from a...

Read the fine print… As a longtime Kitsune HiFi customer, I’m very happy with their products and service but, as they state on their site, “in stock” means something like “we’ll put the manufacturing order in right away.” I agree that the Red looks very nice, but I can’t find a real use for its flexibility, as the two Holo DACs I own have great USB input that I drive with Up Gateway mini-PCs with Intona isolators (bought from Kitsune). From experience, the newer Holo DACs (May and Spring 3) are somewhat annoying with non-USB inputs because of the very long PLL delay with those inputs. One can disable the PLL, which is I imagine OK with the very low jitter Red, but still convoluted compared with plain USB. Which raises for me the question of why Holo Red with Holo DACs?

I recently got a Topping U90 to use with a RPi 4B and Ropieee with a decent power supply. I’m wondering how much of an upgrade this might be - The U90 is I2S connected to a Topping D90SE–> A90Discreete and then to my Active speakers LinkwitzLab LX521.4

Not decided if I will up-sample with Roon or HQP (yet to try) but as Roon is currently limited to DSD512 up-sampling just might have to wait to see if it floats my boat as is or not.

Will be testing the RPi 4B setup to U90 next week. The Topping stack quite well measuring but as we know measurements cant tell you everything.

Which raises for me the question of why Holo Red with Holo DACs?

I use a micro PC with attendant power supply. I can put the PC to use elsewhere and retire the power supply. I can also sell my AudioByte DDC and specialised PSU and a couple of other bits and pieces that the Red will render unnecessary. So for me, I can reduce boxes and cables and have something that can be whatever I need it to be going forward. It does fit in with my needs. It also has Holo’s USB technology built in which won’t hurt, and might even enhance performance over what I have now.

With regards to the PLL delay, both my alternate sources are fixed output, CD at 44.1/16 and phono stage user selectable (presently 2xDSD via i2S LVDS) so I get a ten second delay on selecting the input and then…… music!

Did you manage to get any response from Holo?

Generically this looks like a nice step-up from the Allo USBridge Sig which is CM3 based. However, the USBridge can be paired with any linear power supply of 5v ~3A.

The Red appears to use its own power supply based on an off the shelf $22 Toroidal transformer.

It uses an FPGA for? That may limit the software you can run on this. Usually the FPGA code needs to be loaded by something and I don’t show any storage not on the CM4. This means the software on the CM4 needs to bootstrap the FPGA. That’s very different than the USBridge Sig which lets you run anything.

There is an XMOS chip in there which would be used for the USB. Both USB ports? I’d need to see traces. I’m not a fan of XMOS because too many DACs get it wrong but the reviews of the other Holo gear tell me they figured it out. Stick with what you know.

The dip switches are for changing the pinout for the I2S I hope? That’s fancy… $800 is a lot cheaper than what PS Audio is working on…

This gives me option to compare I2S and USB!

Anyway… been looking for an upgrade to my USBridge… this looks pretty good.

Bring on the reviews!

This is what I know:
After contacting KitsuneHifi and Jeff, they have confirmed the following: