Hi all, I’ve imported my iTunes library into Roon and have done the necessary steps for Roon to recognise the import date. Example: 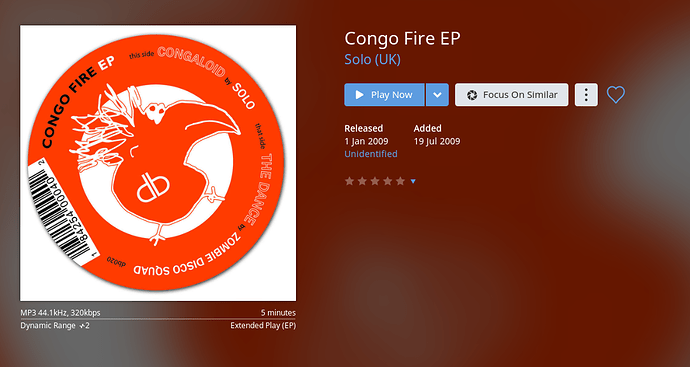 But for some reason I can’t filter/focus on these. I only see imported as far back as 2015:

Any thoughts? Am I doing something wrong?

How did you set the date added? Before or after importing? The default is the date when added to Roon.

For example, did you change the date using Album Editor > Metadata Preferences > Import Date after importing or from Settings > Library > Import Settings?

Thanks for the reply. I’m not sure to be honest. This is what you’re referring to, right? I know I set it at one point. I think I may have deleted my Roon db and started again to get it looking cohesive (a big part of the way I traverse my library is through the date I added, so it was important to me).

But I have only been using Roon since late 2017, but it still shows some as imported in 2015, but no earlier. Is this bug?

I think this may be the reason, but I’m not sure since all my CDs were ripped during my Roon trial in 2016.

However, I’m pretty sure Roon remembers all albums added even after they are deleted, so the original information may take precedence when you add them back (Roon will also remember edits etc.)

You can use Settings > Library > Library Maintenance > Clean Up Library after deleting, but I think you should use this with caution. Whatever you do, make sure you backup your library first.

Looping in @support since I wouldn’t want you to start over if that’s not necessary.

Hi @support I think I’ve isolated the issue on this one.

I have set all my tracks to have their metadata import date from File Creation Time, but I think the album focus screen only looks in the library for File Modification Time.

I realised this when I was trying to find some albums I added in 2011, and had a look to see what happened if I set them to be File Modification. For some reason they were modified in 2015.

I don’t know who to tag to have this looked at, or is there a setting I can set to have Focus look at File Creation Time or to use the Import default?

Hi @bluhska — Thank you for touching base with us! The insight is very appreciated and my apologies for the delayed response.

I had a chance to present your findings to our tech team today. They agree that this is a bug and understand what the problem is.

While I cannot comment/commit on when work on this area of the application will take place I have however opened up a ticket in our system for our DEV team to track this issue which is now in our backlog.

No worries at all. There is absolutely no hurry, just thought I might share what I found.

Thanks so much for replying back, and I’ll look forward to the update

For when the backlog gets reviewed:
another point why an update to focus on import date would be rather useful: the import date may reflect the date when an item got added to a music collection in general (not just to the Roon library) and the information what got added before 2015 is even more interesting in this context compared to “import only”.
If the four year rows would scroll down to the earliest import year available that should work. Hopefully it’s not too much effort to add something like this.

Hi @Eric It’s eight months on, and I am wondering whether there is a timeline update on when this might be addressed?

Is there any plan to allow the focus on date added to go back more than 4 years? It would be nice if it would go back to the earliest date added in my library.

You can sort by date added then reverse the order to get to the oldest. Or are you talking about something different?

That ends up being a bit of a workaround but I still have to click on albums to find the date I am looking for (but at least I can binary search my way a little faster). I would really like a way to say “show me all albums added in 2004” or “albums added between 5/2005 and 6/2005” for example.

Revisiting this I notice that the Added focus feature is labeled wrong, it should read:

Added within the last four years.

Then that changes this thread to a feature request: Focus by added within any timeframe.

Well, this thread has added to my understanding of the Roon functionality regarding this.
I never could figure out why i couldnt get any focus results by tapping on a particular month or year, only occasionally. Now, i figured out that i had to tap-and-drag to select a span.

Anyways, it would be a helluva lot easier to type in (or edit) a timeframe here. And of course, the full timeframe needs to be selectable.

Then that changes this thread to a feature request: Focus by added within any timeframe.

When he was suggested that the feature be renamed “Added within the last four years.”, it was done so facetiously. Maybe you missed the joke? It being that this bug has been around for two years with no resolution

Sorry to be jumping in so late with what may turn out to be a stupid question.

@anon47919701 mentioned above that you might want to add the date that an album was added to your music collection rather than the date you imported it into Roon, and if you use the file creation date when you import the album you can do that. However, as Roon only tracks back through four years there’s no way to focus on albums ‘imported’ before that time.

Roon also supports importdate as a file tag, another source for dates going further back than 2015 (or 2017).