How can I replicate my Airplay setup with Roon

I really like Roon but at the moment I can only use it it one room.

I have several Airplay devices around the house that I use to play the same music simultaneously. How can I do this with Roon?

That’s an either/or situation: I can either play music in the room in which the computer lives, or I can play it on Airplay devices.

I want to do both - to replicate my existing music setup.

Keep in mind that you can only link similar type zones. ie. AirPlay, RAAT, etc.

If you don’t have an AirPlay device in the main room, then it’s not possible to do every room.

I can’t link my Mac (the computer running Roon) with my Airplay devices, even though seemingly every other piece of software can do this.

So I’m asking again: how can I replicate my Airplay setup with Roon?

I asked the same question in another thread it seems the only solutions at the moment are a very expensive Auralic Aries or a diy raspberry pi3. One is beyond my budget and the other is beyond my computer skills.

See my comments below from that thread to see if you think the pi3 might work for you or not.

But this does not seem like something a non computer expert can use.

To get the same functionality as an airport express it seems i have to by a Pi3 and a DAC board and a case and an SDD. Find a USB monitor ( which I do not have) find a SDD card writer (which I do not have) burn something called raspian to the sdd run many arcane commands that make no sense to me and I can’t even seem to find a simple set of instructions.

I need something much more plug and play than this. Is there nothing simpler available that I can hook up to my active speakers?"

The answer to that was only the Aries!! There is obviously a great opportunity for someone to come up with a simple turnkey RAAT wireless device at a reasonable price that we can all use.

Really, I would go online and purchase several old android phones, Samsung S4 or S5 and use them as endpoints, the phones need to be running Kit Kat at the latest. They run Roon, can act as grouped endpoints, have wifi built in. That’s how I"m planning on deploying some endpoints around the house. Plus, android can act as its own playback device which IOS devices cannot do and you can use one as a portable Roon player around the house with headphones.

Ok. I don’t get this point. An android phone can run RoonBridge?

If you stick it in a dock and leave the app running in the foreground, sure–the local zone can be made un-private in settings, and we support synchronization with all RAAT zones, including Android ones.

There’s a small amount of work needed for us to turn that into “RoonBridge for android”. Some settings + network state management to make sure that the RAAT bits boot at startup, keeps the WiFi from turning off, etc. That will happen at some point.

1 Like
Trying to understand the use case of grouping zones beyond the house party
Remix Mini as a Wi-Fi endpoint
Rugby (aka Daniel or Big Dan) April 19, 2016, 4:56am #11

hey fritz, philr was looking for some suggestions to replace Airplay with Roon endpoints that are wifi and about 100.00. He did not want to mess with setting up a RP3 to do the job, so I just threw out what I was thinking of doing. I’m also testing out the little Android Remix.

Daniel mentioned the Android Remix in this post. It could fit nicely into this space as a Wi-Fi enabled Remote endpoint. Currently it would have to run Roon, but as Brian notes above there could be an Android RoonBridge.

This is a bit of a hack and I don’t know how reliable it is with Roon (probably not very), but one you can try easily and for free:

Get AirFoil from Rouge Amoeba and run the AirFoil Satellite app, which is an AirPlay receiver, on the computer you want to play to. It will show up as an audio endpoint in Roon. Since the computer is now AirPlay, you’ll be able to group it with other AirPlay endpoints. 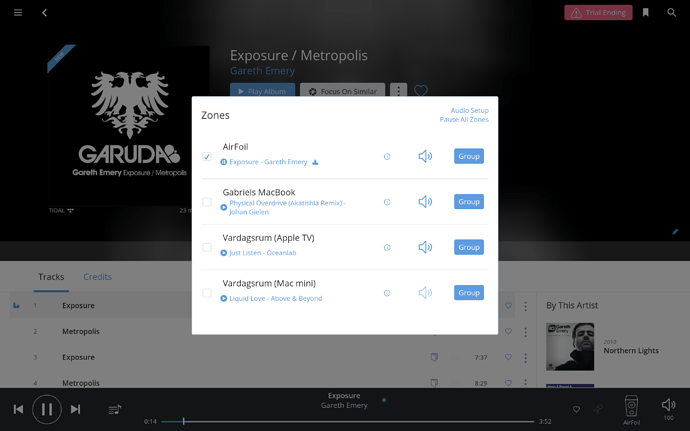 “AirFoil” is actually the same computer as “Gabriels MacBook” 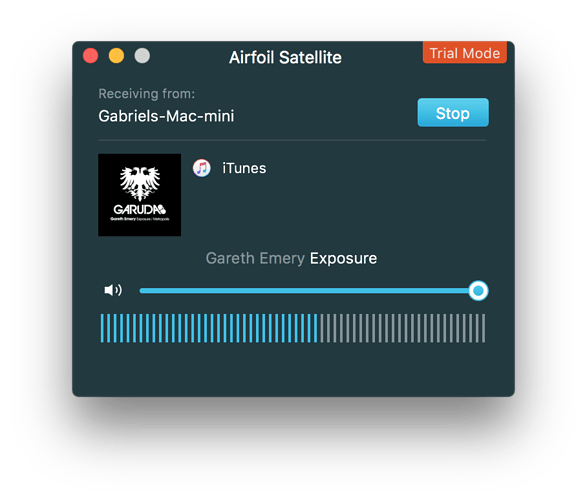 This is how the app looks when receiving audio from Roon. It says “iTunes” but it’s not, and you can just close the window.

Another solution to turn your computer into an airplay device, install AirServer and use the Ex option (lossless), Airfoil mess with the SQ on my iMac configuration, and AirServer looks more discret (PC and MAC).