How do I fix incorrect track groupings?

Roon’s “tracking grouping” feature that groups individual tracks/movements into a single larger piece is an awesome feature, but occasionally it generates quizzically poor results. Here’s an especially egregious example. The album name is “Shotakovich: Violin Concerto No. 1” and the tracks have their correct movement names. Roon groups them into a single piece (which is great), but instead of the expected “Violin Concerto No. 1”, gives it the title “The First Echelon, film score, Op. 99”, which has nothing to do with the album content except for the fact that it was also composed by Shostakovich (image below).

One of the great things about Roon is that it provides a way to fix most metadata errors (album names, track names, etc). But I can’t seem to find a way to fix the track groupings. How can I retitle the piece name to correct this error? The only solution I’ve found is to disable track groupings for the album. That’s ok in this case, but I have another example of a (multi-disc) album with 60+ tracks and incorrect group labelings; so the only options seem to be to live with the error, or ungroup the album into a big 60 track mess. 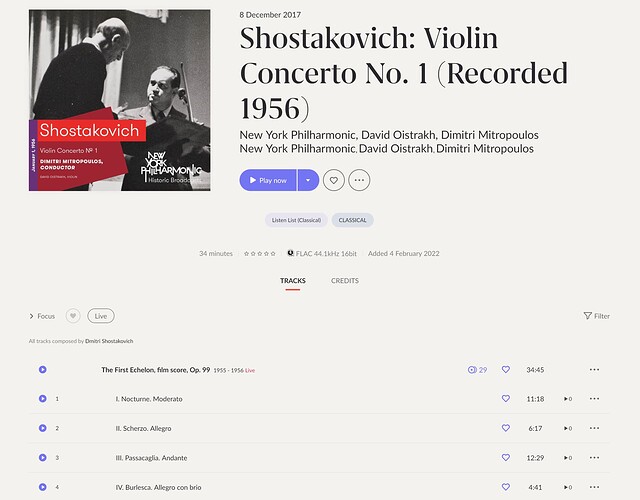 Hi @Aaron_Siegel, I think that you can do this by using the 3 dot menu at the end of the “work” row, so the track grouping, not the track and select “Edit”. You should get a screen like this: 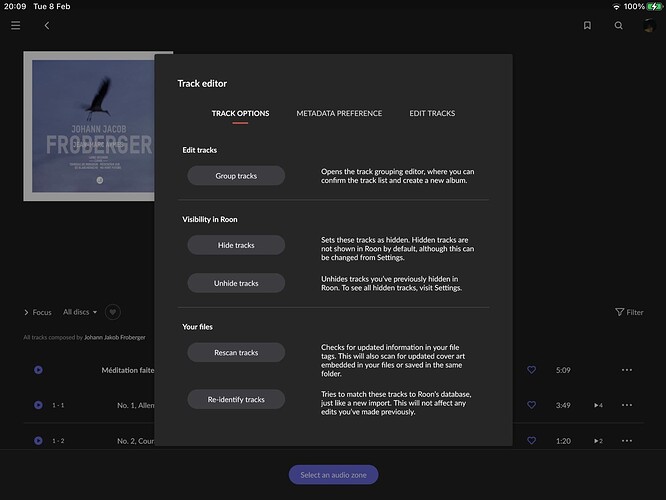 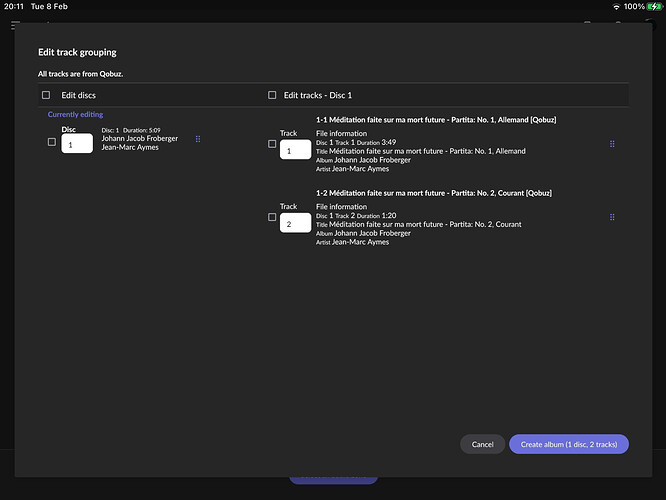 Maybe I’m missing something, but I don’t see how this helps. When I go to “Fix Track Grouping”, I see the screen shown below. There is a list of discs and tracks, but all of the tracks seem to be labeled exactly right, as movements of “Concerto No. 1 in A Minor for Violin and Orchestra”. There is no mention of “The First Echelon, film score, Op. 99”. So on this screen, at least, there doesn’t seem to be anything to fix; I agree with all the info! But when I go back to the album/playback view, Roon still says “The First Echelon, film score, Op. 99”, and I still can’t figure out where it’s bringing that in or how to fix it. Please correct me if I’m missing something. Thanks!

OK, I see the issue, it’s the name taken by the track group is wrong. This thread: Grouping tracks into a single composition has some info, it appears that tags play a part here, but it’s on Qobuz and tagging the file yourself isn’t an option. Might be one to put down to bad metadata, perhaps it’s mis-tagged on Qobuz, or an AllMusic metadata error?

FWIW this KB article gives some more tagging info: https://help.roonlabs.com/portal/en/kb/articles/file-tag-best-practice but that’s not going to help you here. Just for some context.

Yes exactly… it’s a metadata issue. But metadata issues will happen (almost inevitably, given the sheer volume of data). And, while most streaming services just expect you to live with metadata errors, Roon (usually!) lets you fix them, by substituting your own corrections for the default album and track names. That’s one of the things I love about Roon.

And that’s exactly my frustration- this seems to be an exception; there doesn’t appear to be a way to fix a track group labeling error. And in fact, this particular error seems to be introduced by Roon. Qobuz doesn’t do any grouping of the tracks on this album, and it doesn’t seem to be in allmusic at all. So Roon is introducing a metadata error and won’t let me fix it… And that seems very un-Roon, which is why I was surprised and posed the question to this forum

Anyway, thanks for your help… do you know if there there is any way of reporting this as a bug or escalating the metadata error for correction?

There is a support thread for metadata issues.

Just need a mod to move this to the right area.
You might read through the first couple posts over there to see what can be done.

I’ll move your thread over to Metadata Support so we can take a closer look at what’s happening here. I’m going to add a metadata report template to your initial post. If you could add those details that would help us out.

Oh wow, thanks for responding! I’d be happy to fill out the questionnaire, but I’m having trouble editing the post. When I click the “edit” button, the dialog that pops up appears to be read-only.

Incidentally, the fact that I’m nitpicking this stuff shows how great Roon is. If I were to start poking at metadata issues on (say) Spotify, I wouldn’t even know where to begin… and no one would be listening anyway. So, thank you for taking a look at this! I’m new enough to Roon that I’m still in my trial period, but it’s already become my primary music platform.

I looked at this a little more and I wonder if the opus number might have something to do with it. Shostakovich’s Violin Concerto No. 1 was originally published as Op. 77, but is occasionally referred to as Op. 99 or Op. 77/99 (for reasons not worth getting into here). Many albums label it Op. 77, but on this one, it’s labeled as Op. 99 (see the raw track names from Qobuz - e.g., “Concerto No. 1 in A Minor for Violin and Orchestra, Op. 99: I. Nocturne. Moderato”).

Meanwhile, “The First Echelon, film score”, is Shostakovich’s Op. 99a. So I wonder if Roon’s grouping model (or the model of some service that Roon is using?) is looking at the Opus number and (incorrectly) inferring that because it’s labeled Op. 99, it must be The First Echelon, independent of anything else in the track label.