How do Roon and Sooloos co-exist?

I’m not sure if this is a Meridian problem or a Roon problem, but here goes. The other day I was able to successfully connect the Roon app to my MS200, but ever since, the zone is no longer available to my Sooloos system. The zone shows up in the Meridian windows configuration program and happily receives signal from the machine running Roon. I’ve rebooted the system core, but that didn’t help. Can Roon and Sooloos not co-exist?

De-select the zone from the Roon app and the zone will reappear in the Sooloos zone list. I’m guessing two cores cannot both control the same zone at the same time (currently)

I did that, but it didn’t help. I am disconnected from the MS200 on both computers that I have running Roon, though it still exists as a potential endpoint in both apps. The zone doesn’t come back. I even tried rebooting the system core (MD600) but that didn’t fix it either. I’m going to try restarting the zone.

Did you also quit Roon to see if the zone is released?
Failing that reboot the zone.

Assume your zones are fully up-to-date with firmware?

I haven’t seen any firmware updates for the MS200 anywhere. I’m at 2.449 on the Sooloos software.

Quitting Roon didn’t do anything. Rebooting the zone made it come back and I could play music from the Sooloos. As soon as I launched Roon again, the music stopped playing even though the Sooloos system didn’t know it. In other words, the progress bar that shows where you are in song continues to advance but no audio is hears.

When you restart Roon and the Sooloos zones disappear, can you confirm whether you have the same zones in Roon ticked as active?

If I tick the Roon zones, then they don’t show in Sooloos.

If you don’t tick the Roon zones do they stay put in Sooloos?

Just trying to see if we have the same behaviour or different.

I think we do have different behaviour. If I start with the zone working with my Sooloos core, if I run an instance of Roon it will eventually stop playing even if the zone is not selected within Roon. At that point, if I quit all running instances or Roon (none of which have the zone selected), the zone shows in Sooloos again. I could live with the behaviour you’re seeing.

If I’m using Roon I shut down my MD600 core/store, otherwise there are problems of this nature. I suppose using Control PC to disable the Core, rather than shutting down, should achieve the same effect.

It works for me, if Roon releases an endpoint Sooloos gets it. Note that I need to go into Roon settings and remove the Sooloos endpoint from the list of enabled endpoints. It isn’t enough just to not have it selected for output.

I finally was able to get my MC200 music into Roon. I can play a album via my MacBook Air speakers, but when I select the output in Roon to be my 808v3 by checking the audio output box, I get no sound. As others have noted the device disappears from my available output options in SooLoos. The music just continues from the laptops speakers. If i uncheck the box the 808 reappears as an option in Control MAC.

Have you now actually selected it as the playback zone? Bottom right corner of screen…click the zone. Change it to 808v3.

I see at the bottom right where you have a choice for System Output. I went in there and selected “Audio Setup”, It took me to a screen where I checked the 808 under Networked Devices. What should I do next? It just keeps outputting from the laptop. 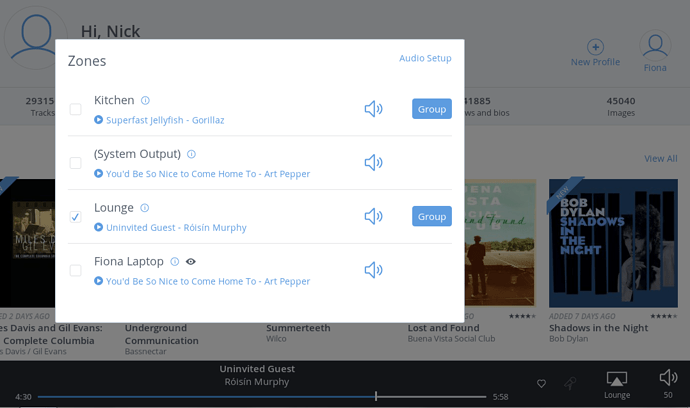 This screen shows the zone selection. In this example, Lounge is my ID41. This is the zone that this specific install of Roon will control. Notice it says Lounge in that bottom right corner?

The Audio Setup option (top right) takes you to the screen that enables zones where you see the network zones etc to enable/disable. This page is system wide.

If all else fails, quit and restart Roon. I have done that before to kick start a zone.

You also need to disable the “Core” functionality in the MC200…have you done this??

Appears doubtful if, as you say, the 808 reappears in Control Mac??

When I show Zones the only one that shows up so far is (system output). How were your other zones added?

Is this where they will not show unless Core is off in the MC200?

You cannot currently have both Sooloos core and Roon core trying the control the same zone. So, when you enable the Roon zone you see it disappear in Sooloos. In this state, can you then select the 808 as a zone in Roon and does music play?

If not, then please try switching off the core in your MC200 settings. Then select 808 in Roon.

Thank you for your patience. Where in the MC200 Settings do you have the option to turn off/on Core? 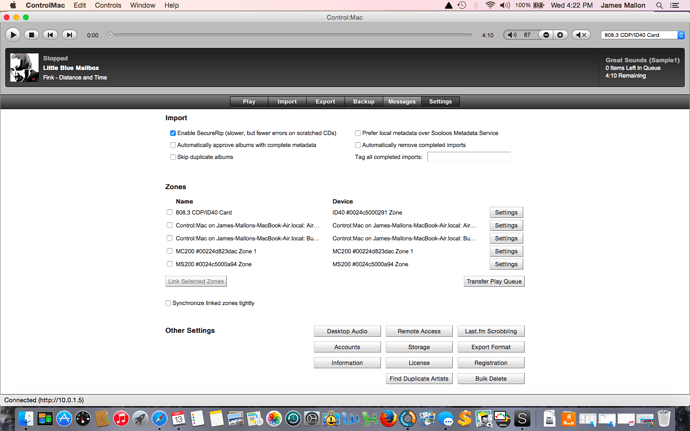 I don’t think you can do it from C-PC/Mac. You’ll have to use the Sooloos Config app. Search HH or Google that.

Thanks for trying. No Windows PC to run the Configuration Program in my home.

Ok…assume you don’t run windows inside your Mac for stuff like this ?

Stick some music on your Mac and unplug the MC200. At least you will then get something playing.

Hopefully M and Roon will sort the firmware out soon so both systems work without this issue.