How do you store your music?

Continuing the discussion from How Big Is Your Library:

Since there is a thread about which DAC we use ( see here : What DAC do you use with Roon?) or how our setup looks (showing it off here

:Showing (off) your Roon setup - description and photos),

I am interested in how big your library is and how you store it. Do you use a NAS, or an internal drive or an external USB drive? I am curious to find out how many Gigabytes they store and if there are any hiccups.

I often read topics about which storage to choose, whether it should be a NAS or so on. Maybe this thread can give an overview about what Roon users chose for their music collection and how many Terabytes the disks have to hold.

I use an external USB drive, which holds 1.1 Terabyte of music, amounting to 30 000 tracks and and around 1 800 albums (this was, and still is, and effort to rip. I don’t know how many CDs I still have left). I use an usb drive mainly because it makes me kind of mobile: I am often on the road and don’t have access to my core and its music, so I just take my music with me.

I have one internal SSD (1TB ->iMay27) and three external USB SSDs (2TB each ->Samsung). I rarely use all of them at once. 90% of the time I only access the internal SSD. I plug in the external storage devices only when I really need them. This works absolutely reliably. No hiccups so far. Couldn’t be any happier.

I use external HDDs for my backups.

When I first setup Roon, I setup a Laptop as the Server and I was pulling my music from a NAS which was a backup of my music. I have all of my music on my PC which Roon does not touch.

It worked OK at first. It was smooth and I did not really have any issues but then again I was new to Roon and did not know what to expect.

Then reading these forums I discovered that if I were to accidentally delete a file, then I was actually deleting the file. So I copied my music library to an external USB 1TB External Drive attached to my laptop (Server). Now this makes 3 locations for my music but Roon only sees the external hard drive.

After moving to an external drive, the Roon experience was forever changed for me. Instant for everything as if I was completely local.

Library is set to backup daily to another, general purpose, Qnap NAS 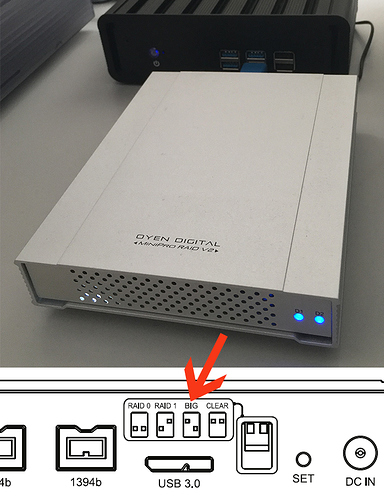 Backups: external USB drives (1 used for travel with laptop, 1 stored at home, 1 used on work machine, 1 stored at weekend cottage, where I also have a duplicate SERVER setup). In addition, all files at work are automatically backed up to a cloud backup service that backs up my entire machine (I think it took 4 months to fully populate the cloud backup because of all my music files).

Backups on the desktop I use for ripping and downloads, and on a NAS, and in the cloud.

I gave up on NAS over the network - too troublesome not picking up changes. (This may have been fixed, I don’t know.)

My 6Tb is now full, so I’ll soon be buying a second one.

Computer runs Roon Core , JRiver and all my normal daily computing needs. Maybe I’ll split some time to one on my Laptops ??

I am fortunate that due to off site work storage requirements I have two chunky NAS (> 25Tb each) boxes (NetGear and Synology) for storage and the back up of my music (I would hate to lose it all and have to start again).

These are attached to my Roon NUC via Gig ethernet using a Zyxel and a NetGear switches and I don’t hear any problems.

Roon tells me that I have 1010 albums which are nearly all CDs ripped as FLAC although a few hires are lurking as well.

I also have some folders that I don’t let Roon catalogue as they are mp3 recordings that I am slowly replacing with FLAC. copies. :

I use PerfectTunes that came with dbpoweramp to tidy things up from time to time.

I recently started using a 1TB Seagate Expansion USB3 disk connected to my Roon Core running on a i5 NUC (Debian Linux). The main reason for this was that my NAS (older Netgear Pro 2) did not supply a full set of file info over an SMB mount, resulting in real time folder watching not working in Roon (like @Ludwig above) .
The unexpected then happened; sound improved markedly with the music disk directly attached. Better bass and more detail overall, but still a more relaxed sound. I’ve checked back and forth a couple of times and the change is unmistakable. I use rsync to mirror the music folder on the single disk back to the NAS where I already had a backup regime.
I have a small library. Only 560 albums with around 7000 tracks, mostly FLAC rips from CD, but also downloads in high resolution.

I store my music on home-built UNRAID server, which is fault tolerant in the sense of a single drive failure. It is not tolerant of data corruption although a scan may detect it.

I have one UNRAID server in two different physical locations – different houses – so while I’d love to have my 4GB of music on the cloud, at least it would take a meteor hit to wipe out both servers!

An internal 1TB 2.5" HDD in my ROCK NUC is sufficient to store my music for another year or three. The content is backed up to a server in the house, to OneDrive, and to offsite storage.

I have a DIY desktop just reconfigured with a pentium g4560 on b250 motherboard, 8 gig ram, 120 GB m.2 stick, and the main hd is a 3 tb WD red drive. Music amounts to under 20k tracks, most in flac, under 600 GB. This pc runs latest lubuntu os, roon server, jriver and other apps like cloud backup software. Grsync set up in Cron to backup the music to another internal drive 1tb so big enough for a local backup.
Jriver serves to the internet so I have access at work on my iPad via jremote.
Roon serves a raspberry pi and my main “music” client, another DIY pc based on n3150 motherboard. Both run roon bridge.
I was running roon server on the n3150 as this at the time had more “torque” than the previous version of my desktop/server box (which was another atom based embedded motherboard), but the upgrade to the g4560 allowed me to reconfigure. And it flies along compared with its previous incarnation. Just had to replace motherboard, CPU, new ddr4 memory and the M2 stick and build into the same case with same spinning drives. Every now and then I backup the music to an external Toshiba 2tb portable drive. 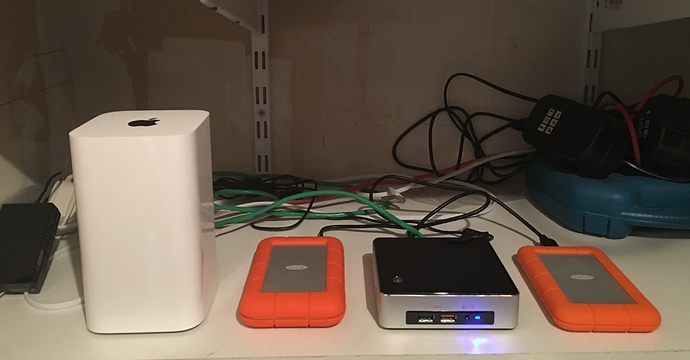 (Time Capsule is for backing up the MacBooks only and is rcloned to BB as well).

I would like the the ROCK could make a scheduled music backup.

ROCK won’t, but can’t your NAS just sync the share?

I’d love to help you, but I’m not overly fond of NASes and it’s been years since I had one in my house. With the many QNAP users here, I’m sure someone will be able to point you in the right direction.

I have one of these dual-bay Thunderbolt enclosures…

…loaded up with two 4TB WD Red drives, configured as RAID1. I also back up to a third 4TB drive, roughly weekly. Before too long, I’m going to need more than 4TB for music storage, so I guess I need to put three 8TB or 10TB drives on my shopping list.