How do you use Bookmarks?

Hey there - so I’m new to Roon but it’s really what I’ve been looking for since the early days of iTunes I guess - it’s really transformed how I feel about digital music and although there is lots to like about Roon the key feature for me is Tags. That may seem like a simple thing for a lot of money but it really makes so much sense to me in terms of how I listen to music and conceive of my music interests and collection.

But Bookmarks aren’t so immediately obvious to me so I’d love to hear about the different ways in which people use the Bookmark feature - I can see how it has an enormous amount of potential.

So would just enjoy hearing how people use this specific feature in different ways as I’m really sure different people will use it in very different ways. 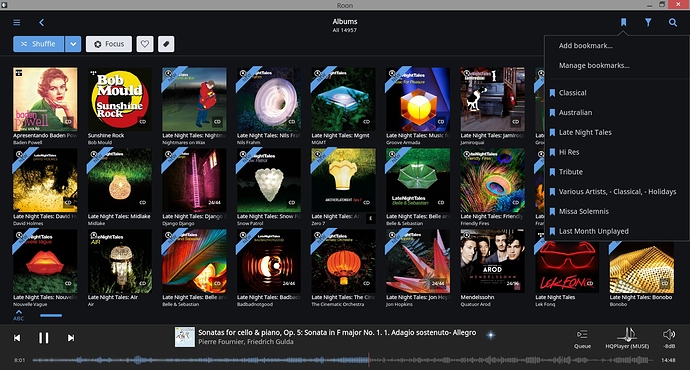 As you can see I’ve been on a bit of a Late Night Tales trawl.

Here are my Bookmarks 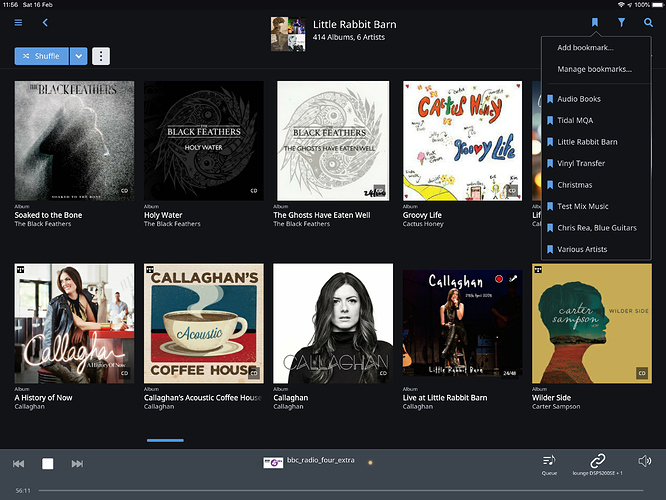 As a relatively new Roon user it took me a little time to get used to Bookmarks but now I find them invaluable. The key advantage over tags is that if you use Bookmarks to bookmark a particular “Focus” you can recall that Focus very quickly and it will of course be updated to include any albums added after the date you made the bookmark. In other words, to put it another way, the Bookmark is a live bookmark adapting to suit albums as you add or delete them.

Perhaps it’s easier to understand if I show the Bookmarks I use (each based on a particular Focus): 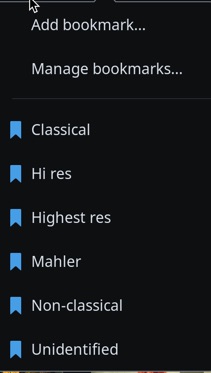 Wow! Didn’t know you can bookmark a focus… oh dear hours will disappear finding new ways to view my library!!

Focus is where it’s at. Remember that you can toggle a Focus from + to - to exclude content. The logic is AND between Focus tools and OR within a tool.

I use a single Classical bookmark, because I can always toggle it to Non-Classical.

At a basic level would I be wrong to conceive of a bookmark as a folder or even almost a playlist but one which can contain whole albums? But there are various ways to add content to that bookmark not simply just adding an album to it.

At the moment I use them for comparing releases of classical works I want to listen to before adding to my library… I just spent a happy evening finding as many Also Sprach Zarasthustra on Qobuz as I could to audition (I wish search wouldn’t be so specific, you have to be really devious to find all the Qobuz ways of titling albums!). Anyway I came up with 5 real contenders based on reviews ranging form 1954, through the 70’s and 80’s to present day. As I found each one I bookmarked it as ASZ01 and so on. Then during listening I could switch quickly between them and rename each ASZ01 - 4 and ASZ02 - 3.5 according to my marks out of five. When I was done I simply added my favourites to my library, gave them a star rating according to their bookmark rating and then deleted all bookmarks.

I know, pedantic eh! And if anyone is wondering in the end I settled for the Karajan 1984 Berlin Philharmonic recording as my favourite (an absolutely sublime version of the maestro’s dramatic interpretation) but suffering just a little from early digital upfront’ness, Closely followed by Fritz Reiner 1954 Chicago Symphony Orchestra simply because of the historical content and the three mic ‘Living Stereo’ sound even if a little laid back (to avoid distortion maybe?) on the massed strings its still fantastic. For the modern version (that should and does sound very detailed) so far I have Andris Nelsons’ CBSO recording from 2014 - nice, but… close mic’d and live, but edited and mixed over several performances and well, you can tell - where’s the soul?

Yes the toggle is great, found it by accident - as I have most of Roon since I began with it a whole week ago!

I do wonder though, why I have to suffer that complicated statistical analysis dialogue with its charts and graphs? I have to click within that to choose what I want to focus upon, and then click twice to get out of it to actually see the albums I focussed on. Surely a simple drop down menu of items to focus on in the title bar would be much easier, with the data analysis as an option on that menu for those who like that sort of thing?

Well for me I don’t use the focus within the album page as Ive found that to be a bit hit and miss and quite hysterical in its selections sometimes (maybe due to Qobuz tags). I go to my library and use the focus button there.

oh ok - so you’re picking ‘classical’ from the genre list?

Yep - but I found very quickly that Roon had imported non-classical Qobuz albums and not really done a good job of matching them with external metadata - so I was getting all sorts of genres and sub genres that had ‘classical’ in their name but not applicable to classical music - such as ‘classical crossover’ and soundtracks etc. So now whenever I add a Qobuz album to my library I go check its tags and genres etc and edit accordingly - especially the title, which Roon doesn’t seem to touch but often is a complete mess! I sort of think Roon will get better at this as Qobuz metadata improves as a result of Roon’s editing - I have a sneaky feeling these two are talking to one another much more closely than was expected.

So far I’ve been doing this using the Tag feature - so for example Taging ‘Soundtracks’ as I know the metadata won’t always bring up all my soundtracks and indeed may bring some stuff up I don’t really think of as soundtracks.

Definitely something I need to play around with to see what works best.

Bookmarks and Tags are really best combined. For example, you Tag a group of objects, and then you use a Bookmark to “preserve” a view of those Tagged objects. Then you don’t have to go through the Tags screen anymore to see that view - you have it Bookmarked.

This makes more sense for things like multi-level Tags, where you apply Tags to Tags in order to create a sort of folder-like organization. Then instead of the multiple clicks to go through Tag view to see the final set of objects, you use Bookmark to get there from any screen.

So you need to learn Bookmarks to get the most out of Tags.

That said, I am going to put in my standard gripe here just to keep it as part of the conversation. IMHO Tag development is incomplete in Roon and needs more work. At the least, Tags need to be capable of being imported from custom embedded file tags in tracks, and need to support the use of AND/OR logic in Focus. And the Roon database becomes painfully slow when focusing on indirect Tags (Tag applied to a related object, like viewing all albums by Tagged artists).

But even as they are, Tags are pretty powerful and Bookmark is one main way to leverage them.

I’ve used bookmarks along with focus to isolate genres and also differant storage locations. I’ve also used it to filter out Tidal albums. So that I can isolate local files versus tidal files.

As you can see I’ve been on a bit of a Late Night Tales trawl.

Good example. So, how do you create a Bookmark of only Late Night Tales albums?

The only way I can see to do this, is to Tag each album. Wouldn’t be cool if you could Focus on a portion of the album title? That is, Album Title Contains: Late Night Tales

Most of my bookmarks are derived from Focus searches or Tags. My one gripe is that you can’t use folders to group them. 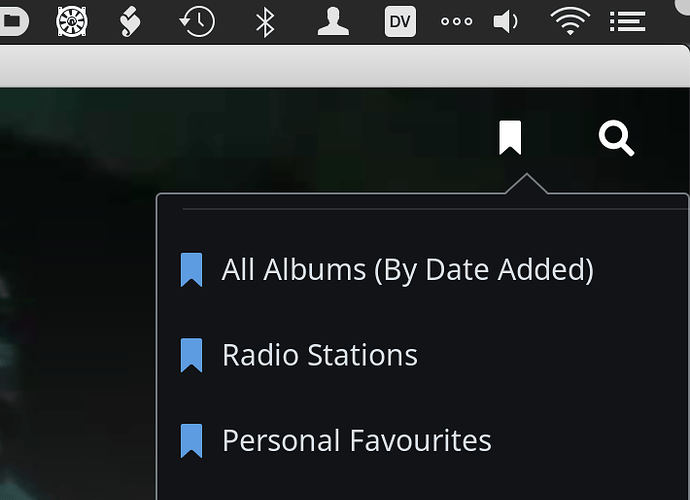