This isn’t necessarily coming from tags – it’s also a classification we get from our metadata providers, and while I understand their classification, it can seem a bit broad.

Generally speaking, they go beyond just tagging Various Artists albums this way and will also include, for example, albums that were assembled after the artist’s death from studio outtakes. In many cases, it simply means it’s not one of the artist’s original studio recordings.

Note that this flag is editable, either on an album-by-album basis, or for multiple albums at once.

Aha. Got it. I’m noticing this too on “best of” albums and that’s consistent with what you’re saying (sort of a shame, as I think most folks think of “compilations” as albums that have various artists). But I’ll adjust my thinking.

If you have Roon group compilations as “Various Artists” rather than by title I suspect the artist albums won’t appear under various artists.

Thanks. What would ultimately be useful for editing this flag in roon would be for me to be able to remove it automatically from any album that did NOT have the compilation tag set to “1”. Perhaps that is already possible, but I’ve just started experimenting with Roon in the last few days, so I have a lot to learn about manipulating things within Roon. I haven’t even figured out how to tell Roon to “list compilation albums only” in the views.

You list them by having Roon sort them by “Various Artists” rather than album title. In effect Various Artists becomes another artist in the artist list.

That’s how I have it setup, it works well for me.

AFAIK Roon doesn’t care about the compilation tag we used to use in LMS, so whether it exists or not doesn’t enter the equation. Similarly, none of my compilation albums has an albumartist entry and I’ve not checked but I suspect all my compilations appear correctly since changing settings/general/Sort Compilations To: to “Various Artists”

Thanks. I’m starting to understand that metadata as I’ve historically known it is simply no longer that important in Roon ecosystem. I am curious about why so many of my “compilations” don’t show up under Various Artists in ROON, even when changing the sort compilations setting to “Various Artist”. Even albums that are clearly compilations of different artists. Oh well, I’ll have to play around with this a bit more to figure it out…I really haven’t dug into that mystery yet looking for commonalities.

I’ve found the best outcome for me is to have Roon use both my metadata and its own. It’s smart enough to eliminate duplicates. It’s especially useful for ensuring you still see more than album, artist and title metadata for albums that are unidentified by Roon

What do you mean by having roon use your metadata and its own. All I see in Settings > General is something about using Roon Genres and showing Genre from file tag. Are their other settings related to other metadata?

Edit: Aha, I’ve found the “Album Editor” that has album options, metadata preferences, edit fields, etc. However, I don’t see a way to do a mass “preference” (e.g., use “prefer file” for “Is Compilation?”). I only see these options for one album at a time.

yip, it’s the genre data I was referring to. I f you go to album view, click and hold on an album, select all and then hit edit you can force Roon to prefer your metadata on a field basis.

I’ll screen dump one of my VA album tags for you.

yip, it’s the genre data I was referring to. I f you go to album view, click and hold on an album, select all and then hit edit you can force Roon to prefer your metadata on a field basis.

I’ll screen dump one of my VA album tags for you.

Here’s what a VA album’s tags would typically look like in my collection: 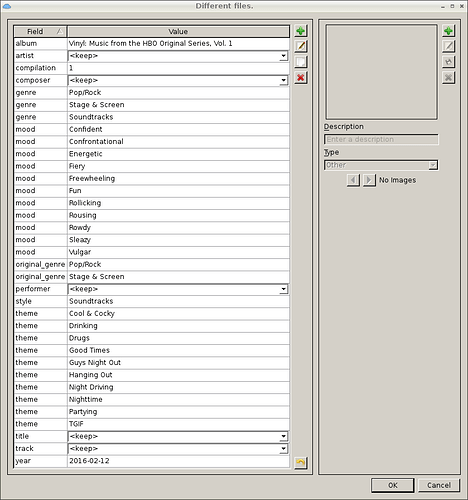 Can you give an example or two?

will do next week…I’m away from machine running ROON.