How have they recorded (created ?) this 96kHz/24bit track

When I buy a highrez album, I normally run (some of) its tracks through Musicscope to see how frequency spectrum looks like.

Recently, I acquired an album ( I will not disclose which one for now), and this is what I see when I play it in Musicscope: 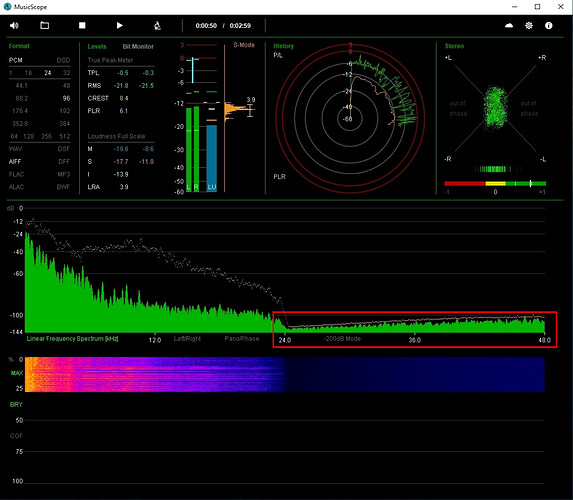 Initially, I was thinking the album is in fact recorded in 48kHz/24bit and upsampled to 96kHz/24bit.

So I took another 48kHz/24bit track and upsampled it by 3 different (offline) tools: 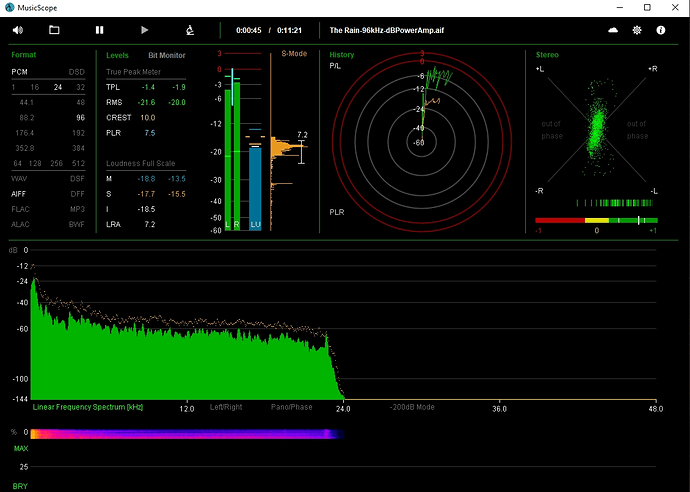 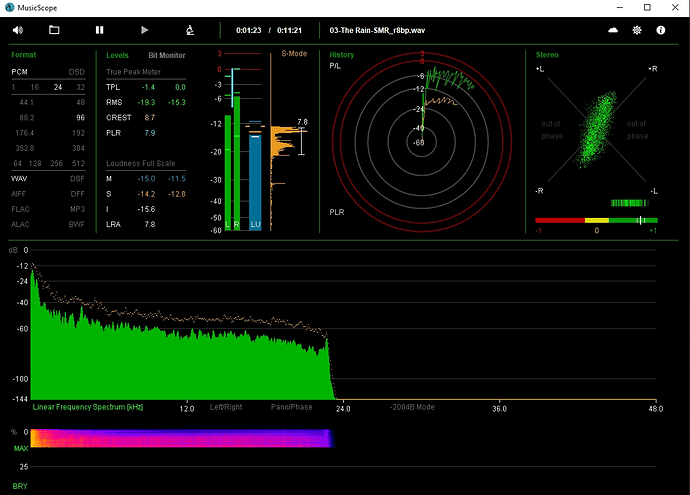 So I really would like to find out what is going on with the ‘unnamed’ track, shown at the start of this topic.

And before I forget, here is an example of a correct 96kHz/24bit track 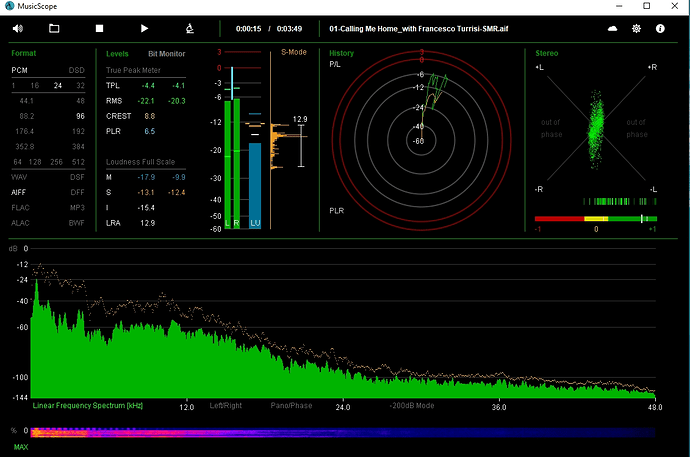 Looking forward to your insights
Dirk

maybe it was sampled to dsd and then to 96/24.
then you have noise in the high frequencies.

Could be, but I would not expect a complete drop at 24kHz. Should be more linear then.
Dirk

Doesn’t the curve depend on the specific song being played?

For example… this is Coldplay’s Everyday Life… 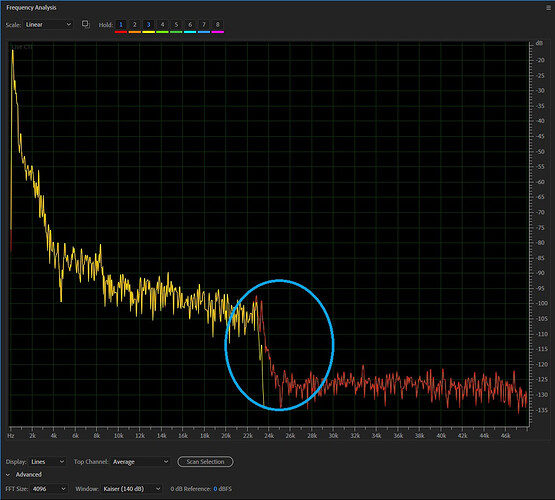 “The album mixes were all supplied at 32-bit float/48kHz. They were then played back at their native resolution through our Digital-to-Analog converters, run through & processed on analog mastering gear and then captured at 24-bit/96kHz”‘

Information from mqa site, but don’t let that distract…

MQA??? (As I quickly hide under my desk)

That’s what I am afraid of, but I do not know how to verify.
Dirk

We know you’re there…

Give it an extra couple of days
Dirk

I’m leaning towards @Gunter_Strubreiter‘s idea - maybe a pcm rip from an SACD source…?

It looks very similar to what DSD files look like in Musicscope. This is a good example: 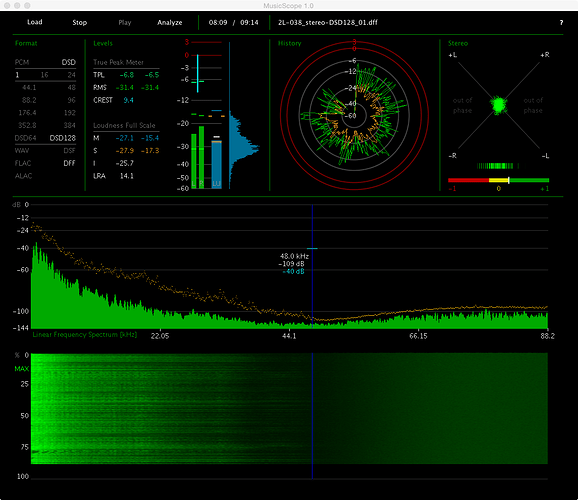 Oh no here we go…Master Quality…

I dare not finish.

I think we need some clues…

Thank you all for your interest and responses.

Whilst waiting for an official response , I have done a small test.

I have downloaded a free DSD album in DSD128 format at:
Native DSD starter pack

In Musicscope I first analyzed track 2 of that album 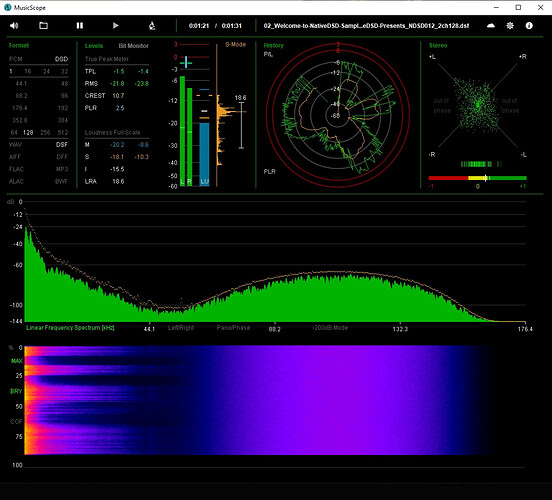 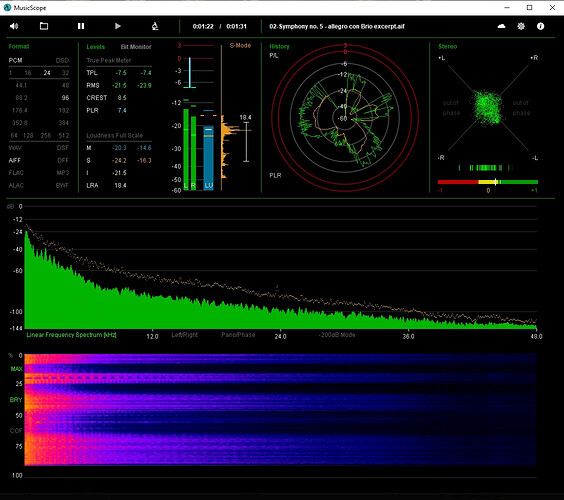 All content above 48kHz has been cut off nicely.
So I strongly doubt that this is a case of DSD to PCM conversion

Yes, but that DSD to PCM conversion ultrasonic frequency response depends upon the characteristics (corner frequency and order) of the chosen ultrasonic filter – of which there are many options.

Hey here’s a question that hasn’t been asked yet: How does the album sound? Last time I checked most humans can’t hear ultrasonic frequencies (except of course for those golden eared individuals who write for the various print and online high end audio publications).