How to analyse signal chain? I have green, I want purple!

My source (FLAC 44.1kHz 16 bit) is indicated at purple, but my output (AirPlay streaming) is only at green.

Set up: Windows 7 PC, wired network to Marantz SR6009 AVR. I believe the network is using cable, but AVR is capable of using wi-fi so I’m never entirely sure how it feeds itself.

Volume levelling is OFF, as far as I know, although I only seem to be able to set this in each queue.

This is normal.
Airplay is always green when streaming cd quality files. Also when streaming from eg 24bit 96kHz will the dot be green indicating high quality.
When Roon streams DSD over airplay the dot is yellow.
I get purple when I play the files directly via usb to dac and onwards to my amp. 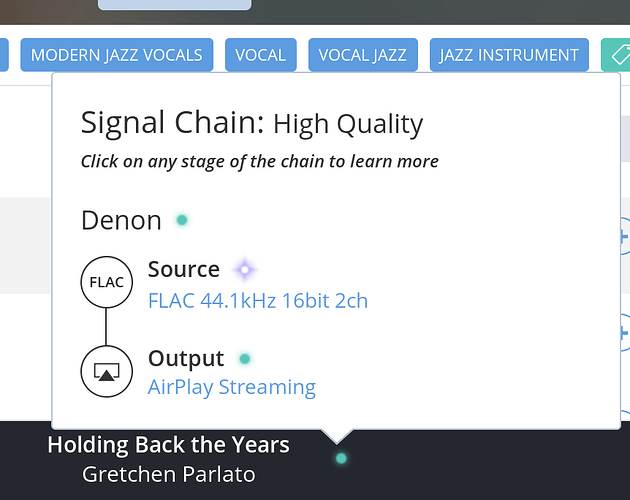 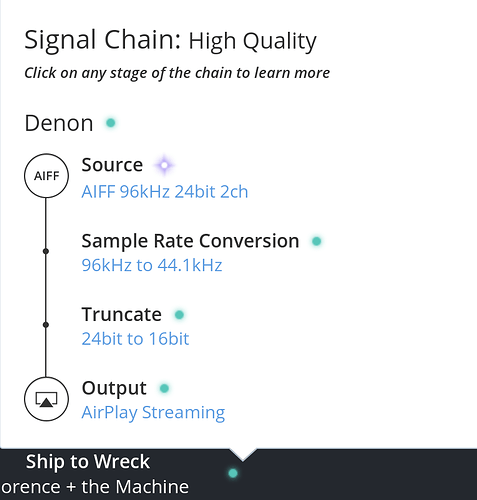 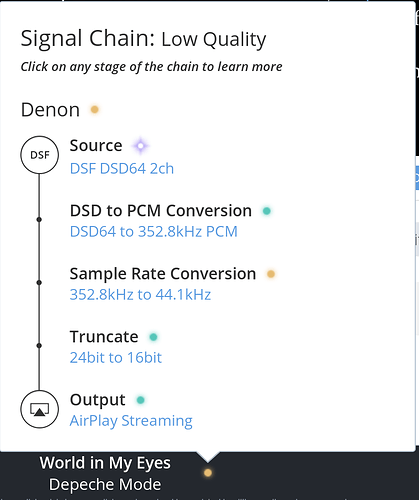 This is due to Airplay limitations on max sample rates not Roon.

Edit: this may be of help, Airplay & downsampling

Surely the first example at 44/16 should be purple?

That would be logical as it’s bitperfect at 16 bit 44.1 kHz. Lossless is purple… yet the dot is green

If I’m not wrong:
The reason why it’s green is that with AirPlay the source (the PC where Roon is running) owns the clock by design and not the player. Clocking differences will/can cause data buffer issues at player’s end therefore Roon decided to give it a green color only.

Isn’t it only 48/16 on an apple tv? When using an airport express or network player I think it should be 16/44. I think @NOA is probably correct. I have not seen any info from Roon about this.

It has been discussed and explained here:
Playback of 44.1 kHz/16 bit material not bit-perfect over AirPlay?

Having seen quite a few people posting their signal chain screenshots, I’m curious as to exactly how the ‘quality’ colours are derived….

I got the colours from another topic

The little symbols a gray/blue diamond,green circle in 'signal chain' have changed,what did i do?

Yellow is low, green is high and purple is bit perfect.

So I figured that once downsamplg or re-sampling had occurred, the signal chain from that point forward would no longer be bit perfect (compared to the source), but often it returns to purple again towards the end, like this example:

Perhaps I’m misunderstanding (not unheard of

), but once something’s been made ‘non’-bitperfect, how can it go back?