How to get native DSD from ROCK to Mytek Brooklyn

Hi, is the a way to get native DSD to Mytek Brooklyn from ROCK on an Intel NUC? Right now only DoP is available. Thanks.

@Eric, Hi Eric, any chance you can advise on this? Thanks a lot.

@danny is currently testing a patched kernel for ROCK:

As far as I can see, support for the Brooklyn DAC is on the patchlist. 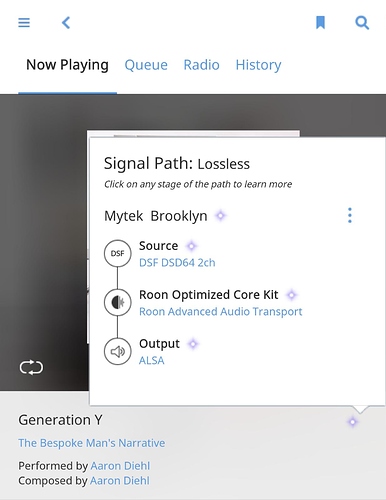 Hi Danny, I’m running Roon on a Synology NAS and having the Mytek Brooklyn connected to an endpoint. Will this patch be added besides ROCK? Thanks in advance.

No, the patch is applied to the Linux kernel–that’s why it was delivered via A ROCK update and not as a Roon update.

In order for Native DSD to work on your NAS with the Brooklyn, Synology would need to apply the patch to their kernel.

Hi Brian, thanks for the quick respond.

I guess to apply the patch to the kernel is not something end user can do? So the only way to enable Native DSD with the Brooklyn currently is running Roon Core on Windows or ROCK? I’m quite satisfied with the performance with Roon running on the Synology, I can upsample up to DSD128 using Roon DSP. Is there other benefit of having a ROCK instead, I assume sonically they are the same?

No, it’s not something you can do.

So the only way to enable Native DSD with the Brooklyn currently is running Roon Core on Windows or ROCK?

No–you just need the machine that’s talking to the Brooklyn to have the patch (or run Windows).

That doesn’t necessarily have to be the same as where you run the Core–since you can run Roon Bridge on a second machine and connect the audio devices there.

One solution is to get a Raspberry Pi 2 or 3, load DietPi onto it (since DietPi includes an appropriately patched kernel), and select Roon Bridge from their installer. Then you can plug the Brooklyn into the Pi.

Another is to use a turnkey network->USB bridge product. I know that the SONORE microRendu and ultraRendu contain the relevant patches, and that they are good at keeping up with this issue as new devices come out.

In terms of sound, I would always prefer to have boxes with fans and spinning disks far away from where I’m listening, so both of these are positives compared to plugging the DAC straight into the NAS.

A post was split to a new topic: Mytek Brooklyn: Possible on MacOS to use native mode and go up to 256khz?

I’ve just installed the latest version of ROCK (Version 1.3 build 276 stable) on a NUC7i5. I’m connecting to a Mytek Brooklyn DAC+ with the default USB cable which came with the Brooklyn. Unfortunately in device setup I get…
… bitperfect support DSD128 max
… no native connection only DoP, PCM and dCS method

playing a DSD256 file results a DSD128 playback on the Brooklyn using DoP. Using dCS is a very quiet, very noisy output not even recognized as a DSD stream by the DAC+ (which shows 24 bit / 352.8 kHz on the display)

Do I miss some additional configuration?