How to Handle Large Multi-Volume File?

Need some ideas on how to catalog a very large multi-volume file. I have an 80-CD set by the Grateful Dead named “30 Trips Around the Sun”. It is composed of multiple live concerts, some of them 4 CDs each, one per year running from 1965-1995.

Right now I have each concert listed as its own file, like 10/20/1968 Berkeley CA. That’s ok, except that Roon shows me 30 copies of “30 Trips”. I tried identifying them each using the “unidentified” feature in Focus, but Roon doesn’t show the whole album.

Any ideas welcome. Year is an easy enough divider, but I can’t figure out how to make that a header of sorts.

I will (try to) explain how I am dealing with such a challenge, but you will need to edit metadata yourself.

I am using a folder structure (even if it is not inline with Roon’s ‘strategy’), starting with artist name.

I will use Lou Reed’s ‘The RCA Arista Album Collection’ album set as an example here.
So, I have a folder in My Watched Folder - ModernAIFF - Lou Reed.

In there, I have 17 album folders, with the respective individual albums of the album set. 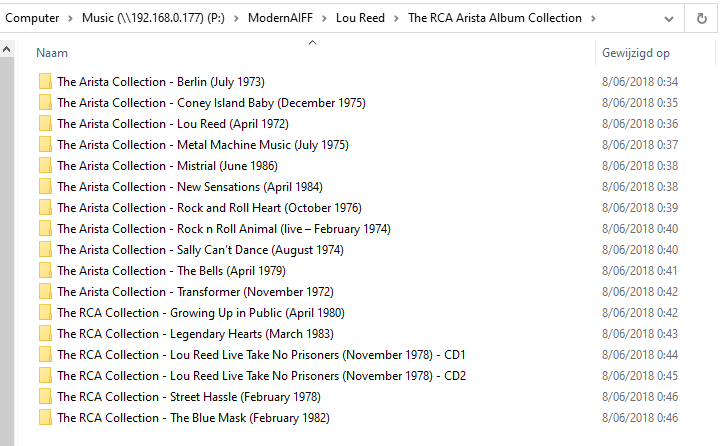 image721×446 29.1 KB
The name of the folder is not really important, the embedded metadata are, but I prefer to align the album ‘folder name’ with the embedded ‘album title’ tag. Therefore, every album foldername starts with ‘The Arista Collection’.

You will notice in each album folder, a file called folder.jpg. This is a picture of the front cover of the album. In this case I have chosen to have the same ‘cover picture’ for all 17 albums, but you can use an individual picture for each album. This is the same for embedded picture (as one can see later). 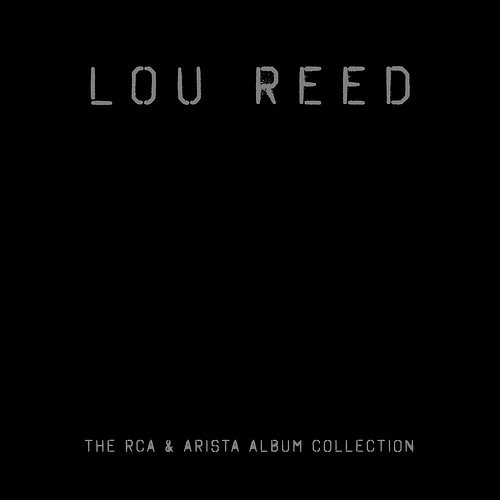 Now let’s take a look at the metadata embedded in each track. Here we will show the metadata of Track 1 of both albums (using dBPoweramp).

What you will notice in here is, that I use the same name for the 17 albums:
The RCA/Arista Album Collection (17CD), but you can name the album as use wish
I do specify the correct discnumber: 10/17 for album Lou Reed Live Take No Prisoners (November 1978) - CD1 (and of course the correct tracknumber 1/6 in this case).
I also have embedded the same cover picture for all albums/tracks, but here one can add individual picture per album.

How does this look in Roon now: 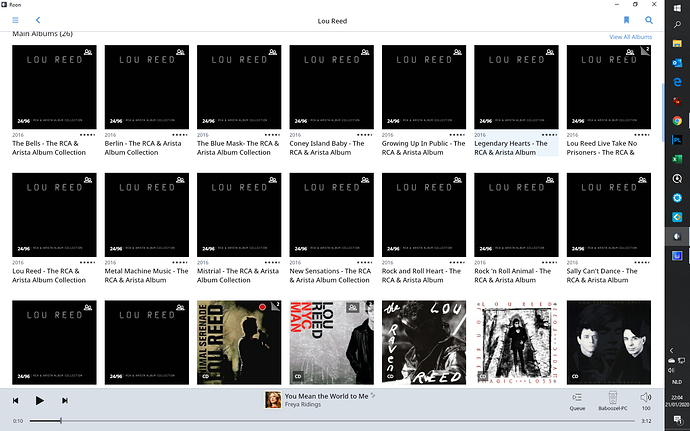 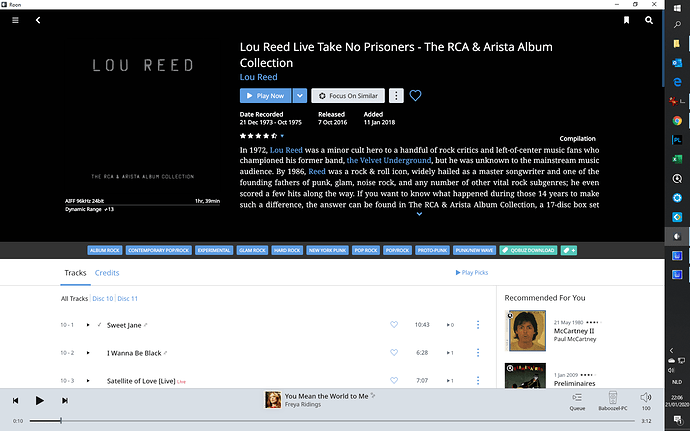 To make that happen, I have edited in Roon the Album Titlename (so in this case, I did NOT select either Roon’s Album Title, or File’s Album Title) 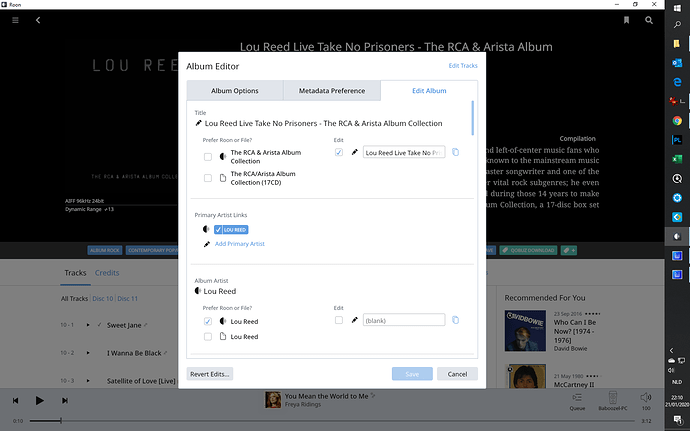 For this particular album, I grouped both discs, so there are shown as Disc10 - Disc 11.

There are a lot of possibilities to handle album sets such as yours, but to repeat myself: you will need to do the metadata tagging in order to get the desired result.

Hope this helps you on the way
Dirk

I feel your pain.

I went with the single album listing and scrolling. I tried the multiple album approach, in fact the files are tagged along those lines but then I chose to merge everything into one giant album. I don’t think that at the present time there is a way to do what we both thing would be the proper way for Roon catalog and display this monster box set - one album with each disc given it’s own unique title. Here are a few screen shots:

Roon’s main display of the album 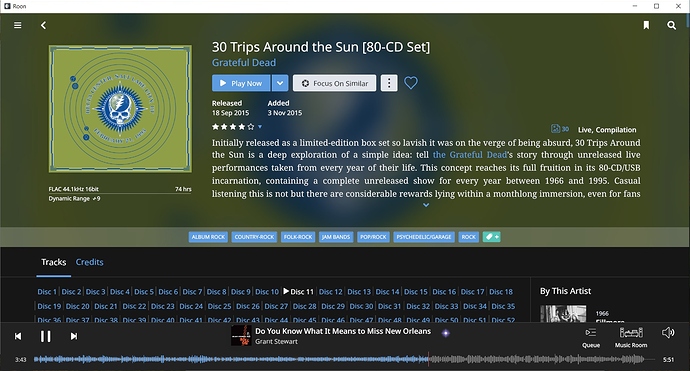 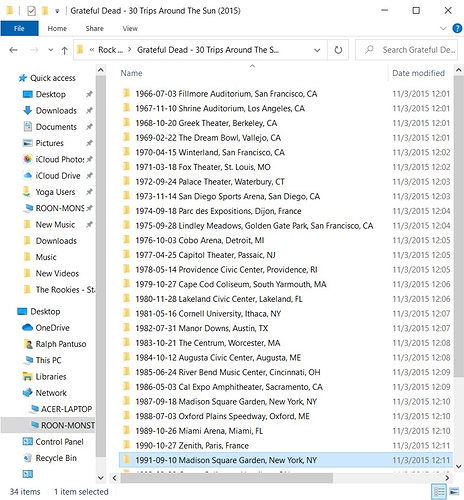 Thanks to you both for the time you took documenting this. The “files inside a folder inside a folder” idea is more iTunes-like, which is very familiar. Roon’s structure is more relational than flat-file, so it should allow both.

I’ll keep playing with it and see what gets comfortable. Thanks again-

Here we go again, perhaps a simpler example but also the Dead.

Ok - I’m not sure how this happened and I’d like to try to replicate it.

Check out this box set called “Beg, Scream, and Shout: A Big Ol’ Box of 60’s Soul” on Rhino Records. It is a 6-disc box set composed of 2 discs labeled Beg, 2 labeled Scream, and 2 labeled Shout. In my core library (shown below) the discs are labeled serially “Beg Scream and Shout! (Beg 1)” and the tracks are labeled 1-01, etc. 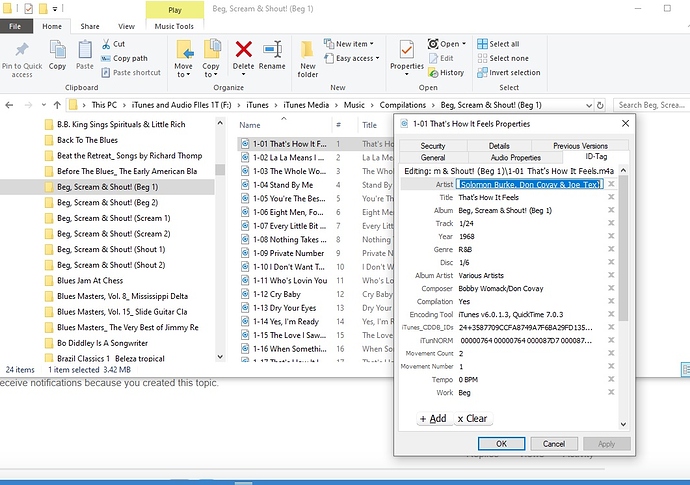 Roon initially gave me six albums, but I merged 2 each into Beg, Scream, and Shout, now giving me three albums. But look at this:

This is “Album View”, sort by album name. I’ve circled the interesting thing. Each Album cover shows 2 CD’s - the upper right corner, but the lower right corner shows the title of the two CD’s! I checked the Roon metadata and can’t see how that is occurring.

This would be a very handy feature for box sets if I knew how to replicate it. Where is Roon finding the “Beg 1” and “Beg 2”, for example? It isn’t checked in the metadata.

It’s coming from the brackets part of your album title. Roon finds any info included in brackets as the album version (I tried to find an official reference but couldn’t.)

Edit. There is this (from Roon KB) 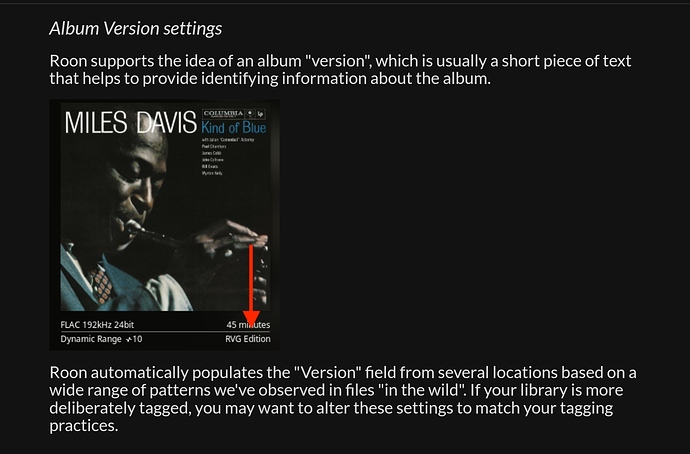 In your reference in the KB, Roon is not very specific about how it handles this: “Roon automatically populates the “Version” field from several locations based on a wide range of patterns we’ve observed in files “in the wild”. If your library is more deliberately tagged, you may want to alter these settings to match your tagging practices.”

What is funny is that when I look at the metadata preferences, I’ve chosen Roon instead of the file itself. 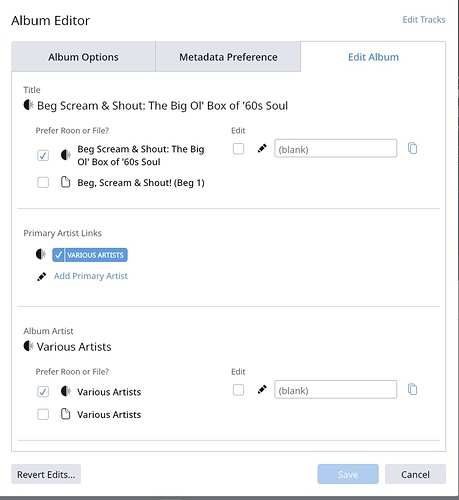 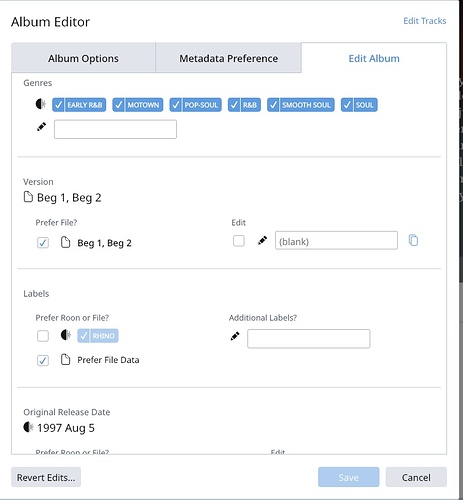 It would be nice if Roon support would tell us what file delimiters we can use and where to put them so Roon can find them. That way we will be able to use this semi-hidden “version” feature for things like the box sets I’m playing with.

Thanks for the clue!

what file delimiters we can use 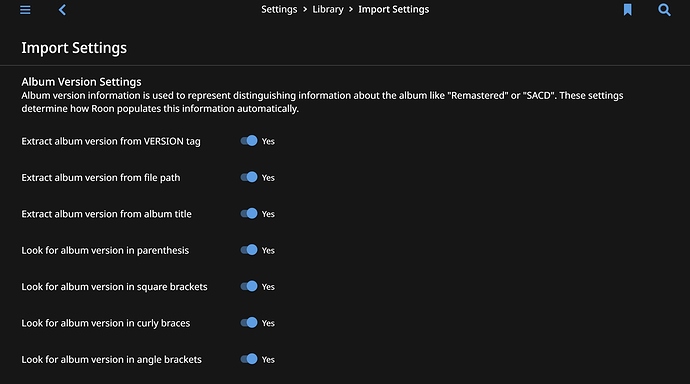 Check out what happens when I combine all 6 CD’s into the box set: 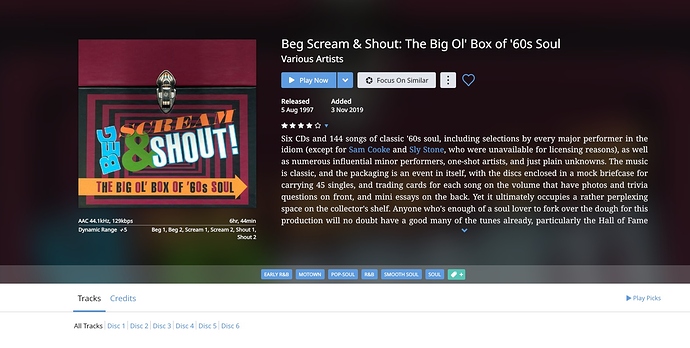 and here’s the metadata: 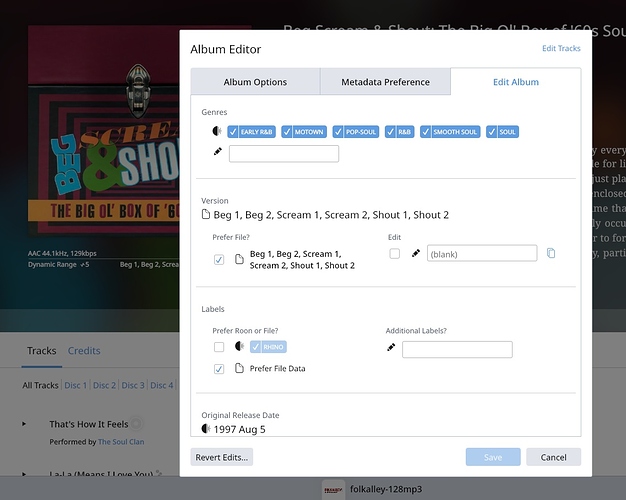 You now get all 6 CD’s listed in order. The only improvement I can see to really tweak this would be to somehow combine the 2CDs each, so only the three “headings”, Beg, Scream, and Shout appear. As I write this it occurs to me that I can do the same thing by just renumbering the tracks sequentially so that there’s only one CD per heading. In a box set like this the individual CD number is pretty meaningless anyway.

so only the three “headings”, Beg, Scream, and Shout appear.

I’m not sure I’m following you here, but you can produce whatever “headings” you like by filling in the Edit field for version

renumbering the tracks sequentially so that there’s only one CD per heading.

Again, I’m unsure whether I’m understanding, but I think a merge will be effectively the same thing.

Finally, if you do separate the CDs, then you will lose the Roon metadata for the box set, while perhaps gaining that for the separate CDs. (I dont know if that exists)

All a good learning exercise!