How to ungroup a collection of albums with the same name

The DJ Kicks compilations, regardless of the DJ, are all titled DJ Kicks. So I have 10 or so of these albums and Roon has collated them all into one god almighty album totalling 29hrs. Is there any easy way to ungroup this unholy mess?

I’ve tried setting file metadata to look to album artist & album title but it still remains together. I also know about the ungroup function. I’m asking if there is a better way to batch ungroup 10 albums rather than going through and clicking each song in one album then making a new album, then repeating for all 250 tracks.

I still use iTunes to manage my music folders since I have an iPhone so I went and appended the album artist to the front of each album title so the albums should no longer have the same title, and tried re-scanning and it’s still grouped. This is frustrating! 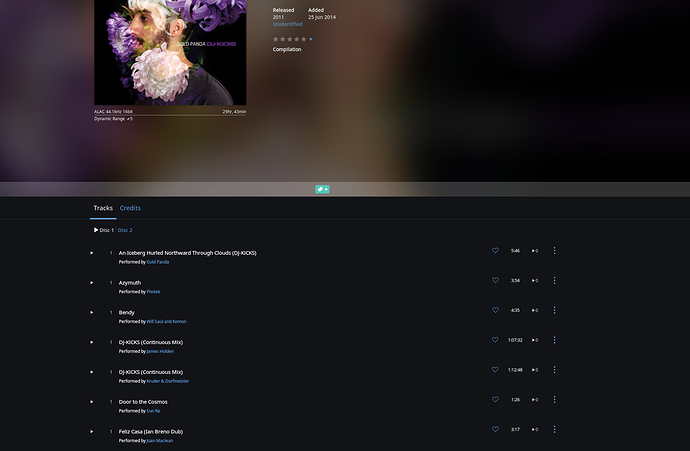 What’s wrong with listening 29 hours to DJKicks?
No serious, try it via edit - fix group tracking, see if there are multiple discs shown in the left pane. Select all albums exept the first one and then press “remove dics” this will remove these album out of the boxset and create seperate album of them. Not very intuative because of the term “remove” I know, but Roon is full of these unintuative little things when trying to do some editing on your own.

I had a similar issue and Roon help me solve it, see the below thread.

I still use iTunes to manage my music folders since I have an iPhone so I went and appended the album artist to the front of each album title so the albums should no longer have the same title, and tried re-scanning and it’s still grouped.

You can definitely fix this using the Track Grouping editor, but I’m wondering if there’s a quicker way, or if we can improve our behavior in cases like this.

If these tracks are all in Track Artist folders (meaning a folder for Gold Panda, a folder for Photek, etc) and they’re all from an album called “DJ Kicks” it’s going to be hard for us to know how to group them, but let me know what they look like on your hard drive, and we’ll get this fixed.

Sorry for the frustration!

Most were one disc, but it’s not a big deal I did it just time consuming

see the below thread.

Hi Paul, thanks for the info. I did find that, and it is what I ended up doing but I was trying to avoid doing it twelve times over for 200+ tracks merged into one.

Mine might be an isolated situation in that I deliberately named all 12 of these compilations as DJ-Kicks, so I bit the bullet and did it manually with the editor. The folder structure is the standard employed by iTunes, and just checked it would have been Music>Compilations>DJ-Kicks>filenames, so this folder had 200+ tracks in it.

Where the precision could come in, if anywhere, is for Roon to identify the different year recorded/released, album artist (as opposed to individual artist in compilation), which are all different and often probably unique. I altered the album name and tried to re-scan but they were still grouped, which was a mystery to me (?), as I thought that was the purpose of re-scan? But I guess it’s better to have Roon stable than continually affected by minute alterations in filesystem metadata. Gosh it must be tough to make these software decisions!

Thanks for reaching out Mike, and for all who helped