How well did Roon Identify your library

If I remove the TIDAL albums from my collection, then I have 1,016 albums remaining. Of those, 199 have not been identified by Roon. However, the vast majority of these are personal recordings or podcasts. There are only 30 actual albums, ripped from CDs, that have not been identified by Roon. And as Oliver P says, GIGO applies; good metadata really helps Roon to nail identification.

I have maybe 50 unidentified albums, I couldn’t identify not even manualy.
And not only exotic stuff, even 3 albums by José Feliciano released early in 2017 could not be identified. Or Luka Bloom’s Refuge released 6 weeks ago.And a lot others

It’s been a while, but only around 400 of an initial 5500 were unidentified, many due to tagging quirks of my own design.

I now have 87 unidentified albums remaining, largely mixed up of live bootlegs, cheapo classical I ripped years ago and a few wilfully obscure titles.

I have a lot of vinyl rips of relatively obscure music in my collection (dance singles, African and Brazilian albums, etc). Roon hasn’t done a great job of identifying those albums. I hope the team figures out Discogs integration soon to solve that problem!

Hi Scott,
I have been ripping some of my vinyl using “Vinyl Studio” which has a setting where you can actually search for your album tracks and, if it finds the tracks for you but not the cover art, you can scan your album cover and integrate it. Hopes this helps.
My problem with the Roon scans is that, prior to start using it, I had ripped over 2000 albums (CDs, LPs, etc.) stored in a NAS and had spent a great deal of time organizing them in different folders according to genre and multiple other categories, such as downloads from HDTRACKS and other sources but Roon fails to present them the same way and, I have to keep doing searches in order to find what I’m looking for… 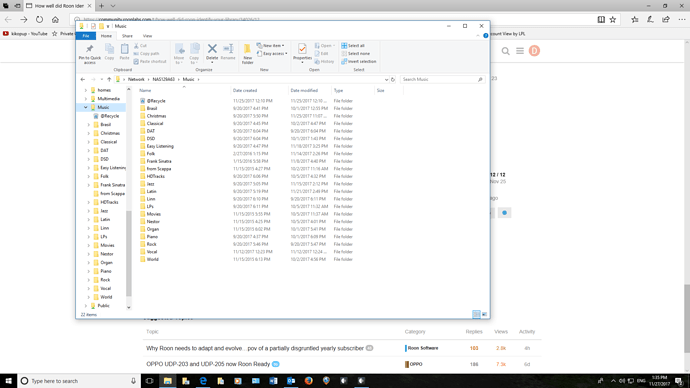 40 Unidentified here, total number of albums=1587. Majority of unidentified albums are underdogs (bootlegs, childrens songs, demos etc). Roon did a great job there, most likely helped by proper tagging. As I’m told, I have a taste for unpopular music…

(Must be honest : approx. 150 of them had to be identified, manually).

@Denis_Fiallos : Instead of setting the “Music” folder as a watched folder, you could choose to watch all of its seperate subfolders instead. So in your case : watch Brazil, Christmas, Classical… etc.
Be careful : I’m not sure how Roon will handle that change, it will probably want to rescan/re-analyze. Make sure to make a proper backup, first !

When watching all the seperate subfolders, you can use ‘Focus’ to only show the albums in one of those paths. And then search (funnel symbol) or scroll through ONLY the albums in that path. You can create a bookmark for each view if you like, for quick access.

My story is different.
100,000 tracks, only 5% classical and opera and just under 20% foreign.
I find that Roon does a good job of recognising albums, a not so good job of recognising artists and I suppress everything to do with Genre.
What is frustrating is trying to make changes inside Roon. I groom the library outside of Roon but the different levels where Roon is allowing external data to rule or applying its own logic are frustrating. There is no clear and unambiguous control panel governing behaviour.
Having said that, Roon has come a very long way and the end result is by far and away the most user-appealing interface for normal users to dive in and find something they like.

Initially, some 700 out of 9.500 albums were not recognized. That is 9.500 flac non-classic albums.
It helps to bring 2 seperate discs of a double album under one title, most of the time that will also identify the album in that same action.
Special versions (such as remasters, extended re-issues, Japanese SHM or MFSL) do not get recognized as such.
Label samplers, DVD, Blu-Ray, it is all beyond the capabilities of the catalogue.
I have three disctinct versions of Kind of Blue; to Roon it’s all one and the same.
So far I’ve whittled it down to about 350 unrecognized by foregoing the mentioned distinctions, accepting 10 tracks out of 12-15 as recognized and adding the surplus as ‘extra’ or bonus tracks.

Out of 2,869 albums only 42 are not Identified. Most of those are obscure albums, bootlegs, local artists, etc. I’m AMAZED at how well Roon did with my collection (mostly rock and classical). Great product!

I’m at a loss here.
there’s this possibly bootleg live album by Anders Osborne (Live at Jazzfest 2004)
It is not identified.
Now Roon shows me this: 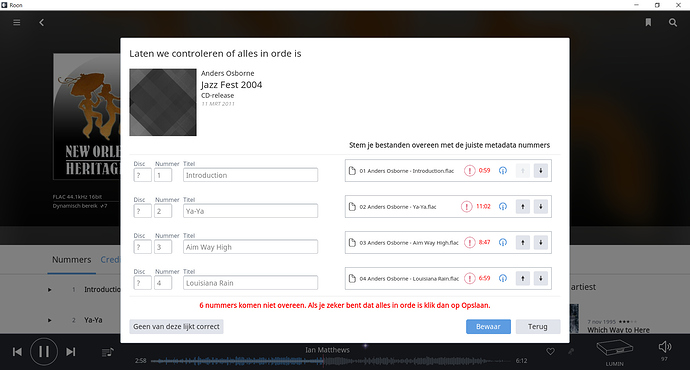 757 unrecognized out of about 4800. Many of these are just common titles, unusual releases, like needle drops.

@Egbert_Braam It just means that we now have metadata at the album level, but no track listings or track level metadata.

Identifying, cataloging and indexing tracks is definitely one of Roon’s strengths.

I have about 35K tracks - Roon originally identified about 30K. After some serious cleanup work, I still have about 3.5K tracks unidentified - most of these are classical or jazz box sets.

@joel; Can we in some way upload these details? Help the catalogue along a bit?

Out of 3500 albums I finished up with about 100 unidentifiable, but after a lot of clean8ng

Hi @Egbert_Braam. Unfortunately, not at the moment. It’s an idea that we’re aware of, but there are other priorities for now.

To add some metrics to my earlier post, I have 9,755 releases in my collection and Roon only identified 6,909 of them. That’s a roughly 71% match rate, which isn’t great IMO.

I think this is largely because Allmusic doesn’t have great coverage of a number of genres I listen to (italo disco, African funk/afrobeat/boogie, techno and house, etc). Still, information on nearly all of these releases are available on Discogs, so the metadata is out there.

A post was split to a new topic: Album Identification: Poor Hit Rate