Some comments if I may. Hope it’s convenient to reply to this thread.

Are different implementations of Roon, say a Core or PC Remote or Tablet Remote more than one “external piece of software” for this purpose or are you only speaking of Roon versus some third party program ?

HQPlayer filter settings can be adjusted from within HQPlayer. This works best if you first press the “stop” button in HQPlayer, then make the adjustments you want, then proceed in using Roon.

There is a keyboard “stop” function in Roon - ctrl T - that is very useful in avoiding disconnection issues. Using that in Roon in lieu of “pause” or before adjusting any settings in HQP has lowered disconnection issues for me. I don’t know if there is a similar function available on tablets.

Great News!
I was set in 2 minutes.

Given that HQPlayer v3.12 supports control of output settings, I reiterate the request of having such controls in Roon.
Furthermore, it would be good to be able to see what output is set to from within Roon bottom bar. At the moment in order to see that I have to go into HQPlayer.

You can see the current setting for HQ Player in the Audio Chain, just click on the purple light

You are absolutely right. In excitement I didn’t think of it.

The only person who can answer that is you. Read the HQ Player Kickstart Guide and listen to it.

Thanks for the update guys! I can only presume I’m missing something obvious, but I cannot find anywhere in HQPlayer (Windows version) to enable network control. Can anyone with a Windows install confirm please? Cheers.

No I cannot find any “network Control” either, but for me it worked for PCM without changing any setting in Hq-player.

But for me DSD does not work with the current beta, just gives noise. BUt DSD converted to PCM in Roon --> ASIO works. Also if I play DSD directly in HQ-player this works (and sounds much better).

Anyone else running DSD–> PCM that has gotten it to work?

For starters, Wow! Awoke in the middle of the night. Discovered the update to 1.1.88. Updated without incident. Read the “How to…” Downloaded HQPlayer beta 3 for 3.12. Followed Mike’s instructions, and, voila!

Randomly chose The Alan Parsons Project, The Turn Of A Friendly Card, DSD64, which started play in DSD64.

I am dealing with a stuttering now after a minute or two of perfect playback. Not sure what the problem is but my focus (pun intended) is on the roon update and integration with HQPlayer. I’ll sort out the playback issues that popped up soon thereafter at another time.

Update: I just futzed around not really knowing what specfically to do to correct the stuttering. Selected “Time” and pressed play which resumed without impediments in DSD64. So far (so good). Checked the Signal Chain. Everything is in order, i.e., corresponds to what is playing and should be. The track is finishing waiting to see if the next track plays…It is…It’s playing without impediments. I am thrilled. SQ is excellent, though I am playing at a low volume given it’s 4:45AM and my wife’s asleep at the other end of the house.

Last icon on the menu bar in HQP 3.12. Mouseover should say “Allow control from network”.

Ah, the stuttering has returned. Don’t know if it’s my Mac Mini (mid 2011, i7, 2.7GHz, 16GB memory that’s the problem or streaming. But I shouldn’t have issues with DSD64. I’ll try the futzing with track selection and resume play which worked last time. There’s more, apparently, that needs to be sorted out. Play at DSD64 should be seamless. What’s the impediment? Still, it’s a beginning.

Sounds like you may not have chosen a filter Richard. Have a read of the Kickstart Guide referenced above. I am currently listening to poly-sinc-short-mp and ASDM7.

One way to correct stuttering is to press back arrow in roon, then press play in roon and replay the same track which just resumed without stuttering. Sometimes the next track plays without stuttering after the previous track. And sometimes, stuttering occurs. But each time, restarting the track from the beginning and playing cures the impediment. Still, I don’t know what triggers the stuttering in the first instance. Next time (hope there isn’t), I use the roon remote app to accomplish the same routine.

I followed Mike’s instructions with all the settings for roon and HQPlayer and am playing through the local host.

Ah the last track completed. The new track started with stuttering. The good news is that the roon remote app will control the playback; and I can restart, resume clean playback.

For now, I will have to manually correct the next track’s impediment which starts with stuttering. But it’s clearly remedial (the cure) in the sense that I, unfortunately, have to go through the same routine of stopping re-selecting, pressing play and the same track that plays in the queue initially stuttering, resumes with clean playback. Yikes! My system? Kinks need to be worked out perhaps. Listening Jussi?

No that’s not the case. On the remote app it reads No Filter. But on the main program see my screen capture. As you can see, I have selected the filters etc. The remote app is not reflecting the same information that the Signal Chain in the roon core application displays. Now if I can only deal with the repeated stuttering that accompanies each track change. 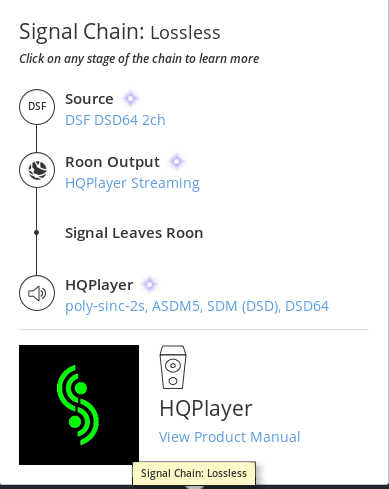 Ah, I see. If the Remote is an iOS device then it will be running a version that doesn’t have HQP integration yet.

Do you still get stuttering when upsampling Redbook or is it just with a native DSD file ?

I found that using the Stop command in Roon (ctrl-t) rather than the pause control when changing tracks or albums made for a smoother experience.

Of course. I didn’t think of that; the remote app is probably not corresponding to the update yet. Someone’s thinking!

I don’t know about PCM. As I immediately stopped play and started a DSD album.

I just succeeded in getting roon to play DSD128, Christian McBride, Out Here. The track started without stuttering. It took sometime to get that album started. I wonder if that’s because of the stream over network, and, therefore, the timing will be a bit slower than straight from HQPlayer, which takes it’s own time with certain formats and sample rates.

I’ll check the PCM vs DSD re stuttering a bit later. Right now, SQ for DSD128 roon to HQPlayer or is it HQPlayer to roon (smile) is excellent.

Thank you for your thoughts,
Richard

I’m not using HQPlayer here, but, just a thought for those now starting to use it…

If you aren’t already using 64bit Roon, you may want to switch to that. I can imagine that running Roon and HQ together on the same machine could get a bit intensive. The 64bit Roon will allow more access to the the RAM.

Thanks for the tip!