I’m having this happen with lots of my albums. They play fine in iTunes. Rubber Soul only shows one track, but that’s not my only problem. LOTS of albums are doing this.

I think maybe it’s not done analyzing my library. We will see after Roon says its done.

well it’s a huge problem. whole albums are missing. lots of tracks still missing. it doesn’t look like its analyzed my whole library even though it says its done. i try to force it to rescan but it briefly looks like it’s looking at many more tracks, then goes back to saying 10,000 tracks are analyzed and its done. it’s a little more than 10,000 not 10,000 exactly

is there any way to call for help? i am not getting good answers here.

Let’s set a notification for @mike or @vova to look into this for you. I expect they will be in touch with you very shortly.

Yep, Mike is working the issue with me.

Is this the open ticket post you were referring to in this thread ?

If so, I’d suggest sending @mike a pm if you would like him to update you on the investigation. Usually Mike will be in touch with you as soon as there is something to report.

1.It’s not as if there are one or two tracks missing - it has failed to find approx 11,000 of
the 33711 files that are reported by JRiver Media Center 21.
2. Despite running the installer 3 times now, the program does not yet appear on Windows 10’s start menu.
3. I’d want to use it for classical music most of the time, but it gets hopelessly confused by different works - some symphonies appear one movement at a time, some appear as entire works, but quite a few don’t appear at all.
4. It doesn’t differentiate between file types - I’ve got two copies of several albums, and I’d like to choose the flac files over the mp3 before playing.
5. It would also be useful if it would show sample rate/bit-depth.

Overall, this program is disappointing, and does not merit the ratings that it has been given in Stereophile.

I can’t be a lot of direct help to you, as my issues were on a Mac with iTunes and PureMusic. However, I will say the following. Mike and the guys at Roon are really helpful. You have to give them as much info as you can. OS, directory details for storage, etc. You will get resolution but it can definitely be frustrating on the way there.

I think you and I are among the unlucky few who have something or things just different enough about our libraries and how we store them to not have the easygoing transition to Roon. I think if you stick with it and work with the staff you will ultimately enjoy what is an incredibly powerful music library management and playback system.

Hi John,
I’ll set notifications for @mike and @vova to see your post and investigate further. Could you supply system details so that known issues can be identified ?

It’s Gigabyte H97M-HD3 motherboard with an i3-4360T and 8 GB of memory, running Windows 10 build 10240 passively cooled in a Streacom case. The OS is installed on a 1.5 TB drive which reports 191 GB free; the music library is on a dedicated 2TB hard drive with 242 GB free. The program seems to be installing itself under c:\Users\Administrator\AppData\Local\Roon, but which is not accessible to me as an ‘ordinary’ user logged in as ‘John’. It does not appear on the ‘start’ menu. For playback, I use the JRiver WDM driver which performs digital filtering and passes the resultant 4 channels out of an RME AES sound card. Access to this playback software and hardware through Roon seems to work fine. Music files are grouped according to genre, with classical further sub-grouped by composer and album. As an example, I’ve got three complete sets of Beethoven symphonies, none of which were found by Roon.
I only use Windows because the RME soundcard does not work fully under Linux; I’ll probably install a multichannel USB card from miniDSP and move back to Ubuntu or Fedora IDC. I noticed that you are developing for Linux, and would consider support for Linux to be an essential.

Hi John,
I’m a user/moderator, not a developer but Linux is coming shortly, quite possibly before Christmas. You referred to four channels. Is it possible that the missing files are multichannel format ? Roon does not currently support multi-channel but there is interest in it doing so.

No, all my files are stereo, and my system is stereo. The 4 channels arise because I use JRiver’s DSP as a digital crossover for my stereo speakers. JRiver splits each L/R channel into 2 HF/LF feeds. (There are 2 offboard stereo DACS and 4 channels of power amp).

I think my issue is that the music collection is already carefully organised, and I’ve never let anything like iTunes do it for me: at the top level, there are separate directories for different genres of music. At the next level down, we have a single folder for each composer in classical, or band/artist in other genres. When I download new music, I don’t mind spending a minute or two putting it into the right place. Having developed this over the past 10 years, I don’t see that Roon is going to be able to do a better job than I have done myself, but it was worth a try.

I’ve attached a Windows screenshot that illustrates the issue. On the left side is part of JRiver’s file view, opened up at Classical - Beethoven, Ludwig van; on the right is what Roon shows if I navigate to ‘Beethoven’, and filter using the term ‘Symph’. 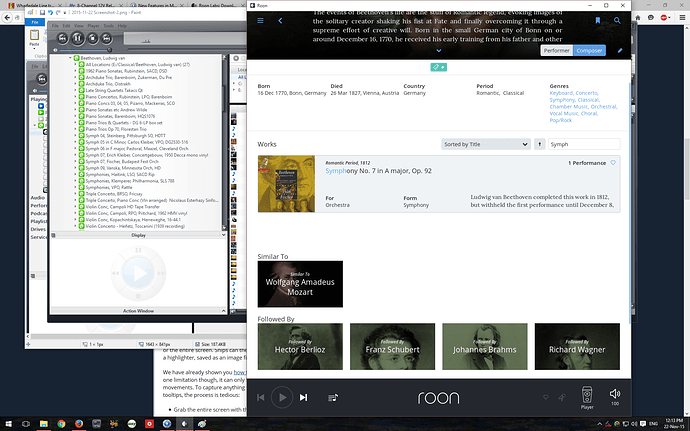 Go to Track browser.
Select ALL
Export data to xlsx

Assuming you have all the Beethovens stored together in a watch folder you can then check to see if the albums you see listed in JRiver ended up as the same in Roon.

Roon may have ID’d the albums as something other than you did.

Did that - thanks for the suggestion. Some of the files that Roon has not recognised are there in the database, but they lack any ‘External Id’ label - that field is blank for many files. Other files are missing altogether - there are 22977 lines in the spreadsheet vs JRiver’s report of 33711 tracks.
Let’s focus on the files that do not have an external label using the Beethoven symphony examples. I’m not surprised that Roon did not find vinyl rips of the Klemperer set, but it should be able to find info about the Rattle/VPO set: http://www.prestoclassical.co.uk/r/EMI/9156242 from 2002. It certainly should find info on the Vanska/Minnesota Symph no 9 from 2006: http://www.prestoclassical.co.uk/r/BIS/BISSACD1616. (My copy is a studio quality download rather than a CD rip, however).
One feature that JRiver MC21 has which Roon (surprisingly) lacks is the ability to read track information from a .cue file. This is handy for vinyl rips where one has just saved the whole LP as a single audio file.

Ok…that’s about 10,000 tracks not seen yet in your Roon library.

I would just do some digging about what that gap is
E.g. File formats that Roon cannot handle.

The vinyl rips is a good example. How many would this account for ? I think cue files has been discussed before. FWIW I used Audacity to split my album rips into tracks.

I use Audacity too, when I have the time to do a proper job or I can’t find a cue file. There are no exotic file formats - I listen to .flac or .dsf files. That’s it.

I suspect that the first category of non-compliance is where I’ve used easyTag or a bulk rename utility to improve on manufacturers’ metadata and/or filenames. That would account for eg the Rattle collection of CDs - but what about the recent Vanska download? I bet I changed the top level file path for that one - doesn’t Roon have a ‘closest match’ algorithm?

I’ve had to manually point Roon at the right descriptors at, for example, a set of Bruckner Symphonies ripped from SACD using a PS3. In searching for ‘Bruckner’, it finds files matched to 3 separate persons: artists called Anton Bruckner and Bruckner, Anton, and a composer called Anton Bruckner. Some of the works are missing, and I cannot see anything other than a random pattern for the files that do match something.
Anyway, I just went to play the 4th Symphony from my SACD set. First movement played fine, after which Roon chose a random movement from a disc of the Bach Goldberg variations. WTF? Is default behaviour just to hurtle randomly from file to file across the collection? It’s just done that leap a second time, even after I manually updated the metadata for the Bruckner album, and I cannot find any setting that tells it to play sequential tracks from an album.

Spent 15 painful minutes matching three separate CDs up to the tracks for a 3-SACD set (Brahms Symphonies by Manze and the Helsingborg Symphony). The track times matched, but Roon did not try any match other than 1-1, 2-2, 3-3 etc. The manual edit process - repeated downkey presses, one track at a time - quickly becomes tedious. What about some form of group select, cut and paste? Or a ‘find matches’ button?

I’m now getting a feel for Roon’s actual value to me as a music lover. Tthe single source (allmusic.com) of reviews is the biggest weakness. Allmusic content is licensed by Rovi/AllMediaNetwork What guarantee is there of its impartiality? For classical, Allmusic.com certainly lacks authority when compared to eg Gramophone.co.uk. Is there enough commercial impetus for allmusic to cover all the classical releases that could be reviewed? To illustrate my point I’ve just looked at a recent release (Dukas orchestral works conducted by Tingaud on Naxos). Allmusic.com has the album logged, but no reviews. Presto Classical offers extracts from 4 different reviews all from decent sources.

This one I can answer. Yes, it is default behaviour to continue playing after selections in the playback queue have finished. The feature is termed “Radio” and can be toggled on or off for each queue. Click on the stave/quaver icon in the footer bar to bring up the queue and you will see the option to Start Radio on the right hand side.

The Roon devs will check into this thread shortly and investigate other issues. Hopefully they can be resolved swiftly.

I understand what the radio thing is supposed to do. But why didn’t it first play the remaining three movements of the piece that I had already selected? They were all stored together as the same album!

There aren’t enough manual controls for my liking - pause but no stop?