I want a new Roon endpoint that is not a computer

Really like this - how responsive are the VU’s? Also, what is the screen hardware? Apologies, I’m new to the Pi game, but thinking of building an additional endpoint, and would prefer a plumbed in screen. Any advice much appreciated.

I use a Pi 3 b with an official Raspberry 7 inch screen. The software is a Picoreplayer and there is a choice of VU meters. It’s set into a very discrete stand that makes the most of the screen.

Jivelite software is avalable with Picoreplayer and this software controls the scree. I tried Picoreplayer a while ago with some success but the latest software is very good and very stable. I am considering adding an Iqaudio Dac + to create a whole streamer package.

Excellent, thanks for your quick response, I may give this a go!

Well worth it. I have it playing through a Dacmagic 100 via USB. Lovely sound. A nice project with lots of opportunity for improvement.

As the original poster, I’d like to post an update. I purchased a couple of Rasberry Pis, which are now functioning perfectly as wifi USB endpoints. They were easy to setup, thanks to detailed instructions kindly posted in this community. Thanks again to everyone for their suggestions and for making this such an interesting discussion.

Here is at the build I did … with speaker output or balanced headphone out.

USB
3.5mm headphone
Balanced Headphone
RCA line level
XLR Balanced Line Level
Im not sure if all of these can operate individually but The USB and other outputs should be able to live with each other playing different streams over LAN I hope.

I also hope to have a volume knob on it to control it when needed.

This is going to use the new IQAudIO DAC PRO HAT and the Pi-AMP+ that matches it.

I recently found the RaspTouch build by audiophonics on the web and have to say, that I quite like it:
You can find more info here. I have not ordered it yet, but was already thinking about it.
Time to get a nice GUI for the pi (if you don’t want to use it as a squeezebox player).

HiFiBerry is a DAC add on board. If you already have a DAC, you don’t need it. All you need is an RPi and case. Total outlay - $40, on Amazon. Don’t pay more for a fancy kit. Oh yeah, you’ll need a wall wart - $7. DietPi is free software with Roon bridge and as simple as it gets.

Hifiberry (and others) do more than just DAC hats. For example the Digi+ range enables digital output via toslink or spdif to a dac and to my ears and with my setup sounds better than USB from the Pi to dac.

I recently found the RaspTouch build by audiophonics on the web and have to say, that I quite like it:
You can find more info here.

I have not ordered it yet, but was already thinking about it.
Time to get a nice GUI for the pi (if you don’t want to use it as a squeezebox player).
Just make one. Fraction of the cost. 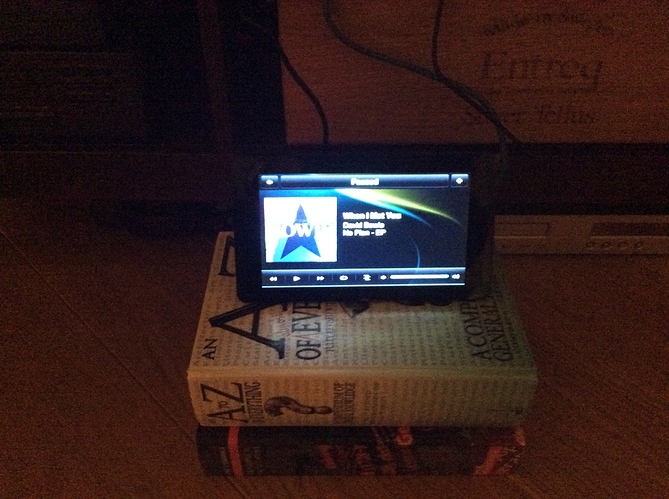 It may be free but won’t live long if we don’t support its author. Please donate if you use it on the dietpi website.

Good point to make; thanks for the reminder.

I have tried several of the HiFiBerrry HATs and an IQaudiO. The problem with a non-USB DAC, at least for me, is the lower available resolution.

http://www.sonore.us/Sonicorbiter.html
Then later you can add the ISO REGEN

To expensive ?
How about a SBT (Squeezebox Touch)

The SBT will perform fantastic with the LPS-1

Would a linear power supply such LPS-1 improve mRendu? Or is it just for the sonicOrbiter?

Many people think so. See this for one such review.

I use the KECES DC-116 to power the i5 NUC and NAS. It has dual output or can be combined for increased current output.

I have Auralic Aries Mini, the beta firmware now support as RoonReady, because of its versatility and low cost, it can use as endpoint.

I’m on the 14 day trial. Everything works fine, except for one thing: playing hires files on the Auralic Aries mini. This is my audio “chain” -96Khz/24 bit file on local computer disk Macbook Pro 2012 running latest version of MacOS Wired cat5e to Netgear switch Wired cat5e to a second Netgear switch Auralic Aries mini, with latest firmware Chord Mojo dac. Naim stereo etc. The Mojo indicates 44.1 khz playback. If I connect the Mojo to the Macbook, I still get 44.1 Khz. Roon doesn’t seem to…