FYI - here’s a previous discussion of having a huge library:
https://community.roonlabs.com/t/my-experiences-with-rock-and-a-500k-tracks-library/27385/10?u=wklie

FYI - here’s a previous discussion of having a huge library:

Very interesting thread! But unfortunately it leaves me confused. It says that for collections greater than 300K tracks you should really use Windows. Does that rule out Nucleus+? Is there a pre-built Windows-based server that anyone would recommend?

we’ve made some optimizations since that time, and 500k is still radically different than 337k.

Thanks, Danny. That’s great news and I would much prefer to go the Nucleus+ route. But I will point out that in that thread Brian (Roon CTO) said the following (note the reference to libraries with 300K+ tracks):

Off the shelf solutions simply do not apply for people in this situation. For people with huge libraries, we have always recommended the same thing: Get the fastest consumer-grade i7 you can, at least 4 cores, 16GB of RAM, a 256GB+ NVMe SSD, a big fan to cool the thing, a nice closet to put it in, and a locally connected storage array for the content, and then run Windows 10.

That was the advice before Nucleus existed. It was a proven solution but as Danny says, there have been optimisations to Roon and there continues to be improvements in areas in Linux where previously Windows 10 was unquestionably superior. What does @danny think about the possibility of getting Nucleus to work in clusters? So for those really big libraries you got 2 to load share?

@Steve_Fisher – updated his post w/ an edit at the top.

What does @danny think about the possibility of getting Nucleus to work in clusters? So for those really big libraries you got 2 to load share?

I think that is a large amount of work for the handful people with libraries larger than 1m tracks. Until that point, you can still buy powerful enough single devices.

Thank you for choosing QNAP NAS, and we would like to help you on the Roon and NAS issues. Would you please submit a ticket via QNAP Helpdesk and kindly provide us your ticket number? Our support team will contact you in time, thank you very much!

Nice of QNAP marketing to chime in here…

Steve,
Although I am sure a Nucleus+ would be better (I’m waiting to try one), the configuration you are describing is almost exactly the same as one I have been running for a while. I use the same Qnap for 350k tracks and since it settled down (which took a few weeks of analysis etc) it has been very reliable. I don’t have need to reboot Qnap (current uptime 101 days).
Having said that, it depends I imagine on what else you are asking it to do. Although I use several endpoints, I never request signal processing on the Qnap - I suspect that would stress it out.
My interest in the Nucleus+ is faster focussing.
The image below shows the resource usage on Qnap. 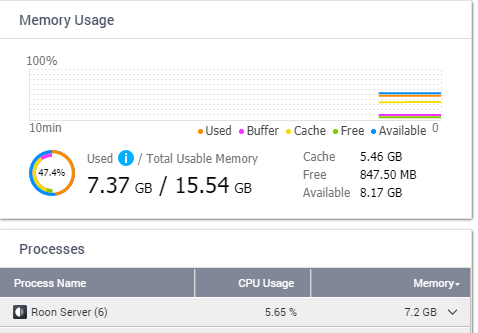 I was prompted to answer you about the Ultradac. In my experience the Sooloos network endpoints will always give a better sound than a USB connection, especially from a PC or Qnap. At this level of performance everything makes a difference, including cables, router etc.
Danny is right that having the analogue audio parts well away from ‘radio noisy’ networking is a good idea.

2 posts were split to a new topic: How do people find time to mess with electronics when they have huge music libraries?

Thanks!! This is really helpful. I can’t explain the issues I was having with the QNAP – I used it only for Roon, and I did no signal processing. And yet after a couple of days all the Roon Controls would get very, very slow. Then when the QNAP was rebooted all would be good again, for a little while.

In any event, I now have my Nucleus+ up and running. Migrating to it was extremely simple, as you’d expect. I’m still storing most of my music on the QNAP, although since I had a 500GB SSD in the QNAP to run the Roon Core I decided to move that drive into the Nucleus+ and stored my most frequently listened to music there. I doubt it makes a difference, but I just wanted to give it a shot.

The Nucleus+ was a little slow at first, but today I installed an additional 8GB of RAM and it’s made a big difference.

And based on everyone’s advice I am continuing to send music to the UltraDAC over the network using the Sooloos protocol – works great!

Thanks everyone for all the help and advice. What a great community!

Although I am sure a Nucleus+ would be better (I’m waiting to try one), the configuration you are describing is almost exactly the same as one I have been running for a while. I use the same Qnap for 350k tracks and since it settled down (which took a few weeks of analysis etc) it has been very reliable. I don’t have need to reboot Qnap (current uptime 101 days).

The Nucleus+ was a little slow at first, but today I installed an additional 8GB of RAM and it’s made a big difference.

My guess is that your import or analysis finished, as that is a very resource intensive task

The extra RAM should allow a larger library to not crash. It should not impact performance at all. It’s just not how we use RAM.

No – the import and analysis had finished but it was still slow – much slower than when the Roon Core was running on the QNAP.

Now I’m set up nicely with SOTM -sms200 neo, S Booster power supply , SOTM cat 7 audiophile Ethernet to my DAC and system I was considering a Nucleus +. I’m a little put off though that given the significant cost of the Nucleus for what it is, you had to still add RAM and until then it was slower than the QNAP. I currently store my music in a QNAP NAS and figured I’d connect the QNAP to the Nucleus. I am prepared to spend the money but can someone please help convince why the Nucleus would improve the functioning of my set up assuming that my QNAP is powerful enough for library. Around 1800 albums, 300 dsd albums plus Tidal.

It’s a one box silent system designed to run Roon as effectively and efficiently as possible without any computer knowledge. Plug it in and go. Yes I am also put off by the cost and can’t justify it. You can build your own fanless pc for far less and install ROCK to run it so you get the same efficiency as the Nucleus but without the extra home control features as they are unique to the Nucleus. It sounds like your better of keeping what you have as yihr likely to not gain anything from it.

It is what it is. If you need to be convinced then you don’t need it, you just _want_it! Nucleus is for those who are happy to spend that money to avoid performing cartwheels to make Linux work. It is a tool designed to simplify what is essentially computer audio, for people who don’t like computers. As an item of hifi you will pay more up front but it’ll hold its value better than the equivalent NUC. As for the rest, you know what Roon does.