A couple of people have said that it is Volumio and @dabassgoesboomboom has said that it was a bought in platform.

Seems it’s still based on Volumio

I agree, there seems to be some confusion around this.
It could be the low level kernel and running Volumio on top. Hopefully more information will come out over time

I got an M1 Mac on loan to play with as always HQP curious. HQP is having issues with 2 recent i5 PCs I have with thermal throttling issues. HQP can turn a decent media PC into a mumbling old 286 without much effort

But I think it works well now

Neo Stream might have different SoC that can run newer kernel

Hopefully someone can check this. Maybe @Peter_Hafkamp

Yes I think it is a great little device, just at the top of the range of what it can do, especially when turning all services on and using SPDIF at 192 (but the Roon and HQP only mode fixes that at a cost of choice).

The old kernel does seemed to have held it back a bit, but it has got to where it needed to be, it just took a lot longer than expected.

I am patiently waiting for some deep dive YouTube videos to come out and get feedback from user’s like Peter as they use it over a month or two.

Glad you like it. Super interested to see what you make of it as time goes by.

I tried the aes/ebu digital output with an external dac but I liked the internal dac better.
Roon only mode was not working anymore, Roon didn’t recognize the iFi, aio mode still working.
A factory reset on the iFi fixed the problem.

How to check what kernel is used?

Can you enable ssh on the neo? If so, log in to it, then type:
uname -a

@David_Snyder posted the kernel version of Zen Stream in this head-fi post:

He would know how to find the number.

But I think in Roon when you look at audio devices, it might show the kernel version there next to your Neo Stream?

Can you share a screenshot of your Roon Audio Devices page ?

We do not yet have precise information on the daughterboard used in the Neo Stream. If it is compatible with the Zen Stream’s motherboard, iFi audio has all the cards in hand to offer a ZS V2. They have the hardware, the device tree and can easily make an update. Still if the daughterboard is compatible, they could simply offer a kit… I made a dream. I’m going to have another coffee. [EDIT] Finally, according to the iFi audio website, these are the same cards. …

The other possibility is that the photos are not in line with the latest batch released. (?).
Or maybe it’s time iFi audio delivered a new kernel for the Zen (or explain that it’s definitely not possible… ?).

@Peter_Hafkamp were you able to share a screenshot of your Roon ‘Audio Devices’ page in Roon settings, with the iFi enabled ? 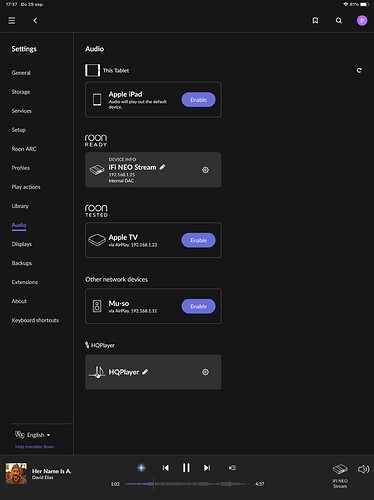 In the iFi control app, on the open source license page it says kernel 4.4.x

Thanks. Sometimes Roon Bridge devices show it but this is Roon Ready i now see.

In the iFi control app, on the open source license page it says kernel 4.4.x

Thanks! There we have it. Same as Zen Stream

So is that a problem?

To get verified information, you should try a console access via ssh.
And then just type “uname -a”.

I think people were hoping for a more modern Kernel as it has additional features.

One of the reasons that the Stream was held back was because the Rock chip only supported a several year old kernel.

No one is saying it is a problem, people were just hoping for more

I don’t really understand much about that sort of thing. Does it mean there is limited capacity for updates and added features in the future?