Impossible to sort these albums between local and tidal

I’m trying to have these 2 albums merged as one and there’s no way to do it. My local library album is 2 records, tidal is one record, both are 28 tracks long. Moreover, if I go to discography, only the tidal version shows there and my local version is invisible until I “focus” on library. When I entered either album, none shows the other version under “Versions”. Album is STADIUM ARCADIUM: 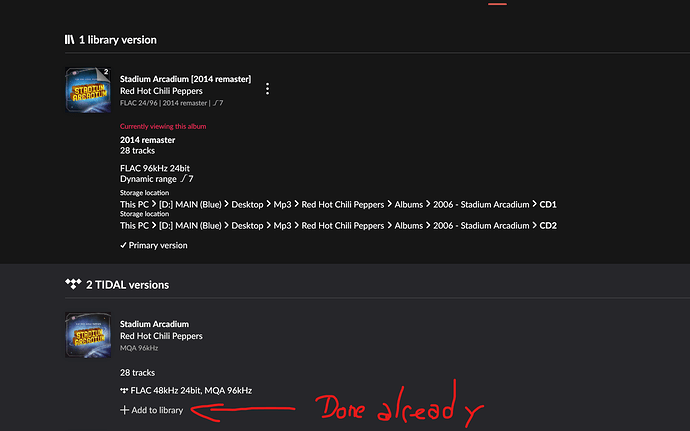 Hello @Dexter_prog, the discography tab purposely only shows one version of each release; you can’t change that.

Try using the overview tab and albums in my library. This will show all versions as long as you have show hidden tracks and albums set

Now, having said that, the versions tab should always show if you have other versions, so I’m a bit confused there if you do indeed have the Tidal version in your library.

huh? I don’t want to use the overview tab, frankly, it’s clunky, but I may end up having to use it if this can’t be solved. I can have the same album shown multiple times in discography if I want to (I can change it’s name or separate it using edit album). I do have the tidal version added to my library, but clearly there’s a bug and it’s not showing as added. All I want to see si that album and see both versions available (local + tidal) as I am able to see in other releases. I’m under the impression Roon is having a conflict because local version is 2 discs (14+14) and tidal version is 1 disc (28 tracks).

it’s not showing as added.

Where is that? Can we check that it got added OK? Perhaps it’s got lost since you added it. Does it show in the albums list of overview (or a filtered album browser if you prefer)?

When you select it, does it have an add to library option?

And you are right in that Roon may not recognise a 2-disc and a single disc as two versions of the same album. You may have to manually mark these as duplicates yourself.

I’m under the impression Roon is having a conflict because local version is 2 discs (14+14) and tidal version is 1 disc (28 tracks).

Yes, that is part of the issue I suspect. Try editing one or the other to choose the 2 disk or 1 disk version. I mean if you go to the Tidal version in your library, Edit, then Identify, choose Stadium Aracium and you should then get a screen like below (yes this is bowie). I have circled in RED the version choice. Choose the 2 disk Version for the Tidal album and then I bet, Roon will equivalence them. 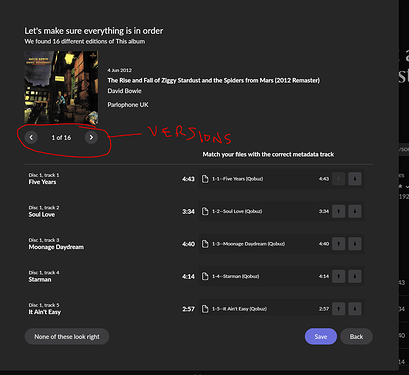 The other issue is as BrianW mentions, Overview is meant to review your library albums. Discography has a different purpose.

Thanks for taking the time to post about the issue you ran into - sorry about that and about the delay in getting back to you.

It’s great to see that, in the meantime, you’ve gotten help from @BrianW and @Rugby (thank you both

Is there anything we can help with, despite the delay