The new “In their prime” feature doesn’t play anything when there aren’t any albums to play. This may seem like common sense, but I’m curious why “In their prime” ever shows up, and why the “PLAY ALBUMS” button and text is still highlighted when you scroll over it, if there’s no content.

I know why it can’t play, because there aren’t any full Tortoise albums available on Tidal (although they do show up in a few compilations that aren’t showing up on the Roon Tortoise page but you can play by searching Roon for those albums, such as “United Mutations”, but that’s a different issue). But my question/bug report is that the section still shows up and acts like there is content to play when there isn’t any content available. 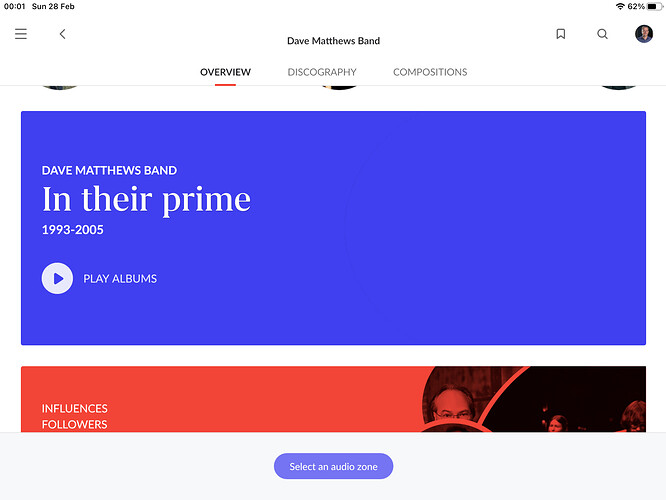 Thanks for the report, @rcrawley — Our team is looking into this.

This was resolved in B778

Hi all! The last few weeks have been a whirlwind, with some of the best feedback (and sales) we’ve seen in the history of the company. Not only are more people using Roon, but people are listening to more music every day, discovering more music than ever before, and participating in this community at never-before-seen levels. In a user interface “redesign” release like 1.8, we are making thousands of changes at once. It can be very difficult to predict the handful of changes that will cause pr…