I like the new Album level Focus , so much so that I have started to reintroduce BIG box sets back into Roon, previously navigation was so bad I just gave up.

I now look a big album, use Focus to select a Composer then Composition and voila 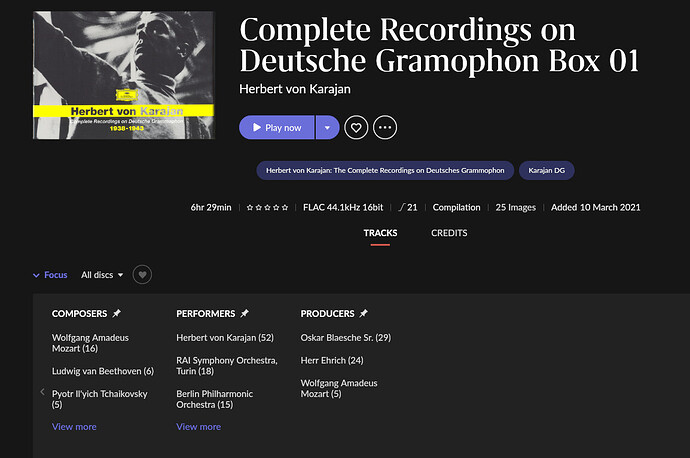 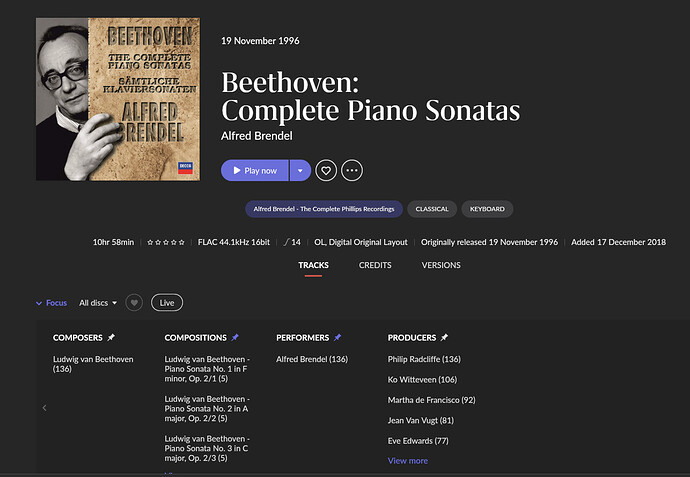 Compositions are missing , the file Composition Tag is set correctly as is the Movement tag , but thes 2 albums react differently

Why , am I missing something ?

The difference being that one is a multi-composer set, the other one a single composer set. But the filter logic should of course work for both the same way.

my problem is the following (copied from the beta section) Focus does seem to work differently on unidentified albums. That’s a big drawback for me, since it renders it unusable for me for a lot of my albums. In general the new focus feature seems to adress some of the issues with large classical box sets. But since a lot of those boxsets don’t have proper 3rd party metadata, they rely on files tags only. My file tags are all maintained based on the best practices for classical and works are …

I had identified this during the “late beta test” days before release of 1.8 I do still not know whether Roon has created a ticket for it. Therefore I would encourage you to flag support on that, too.
It does happen with about half of my boxsets. I did not see a pattern. Initially I thought that it happens only on undidentified albums but that does not seem to be the case.

I just looked at this again using a box Set with Sviatoslav Richter, and I actually get the compositions, just one drill-down level deeper: 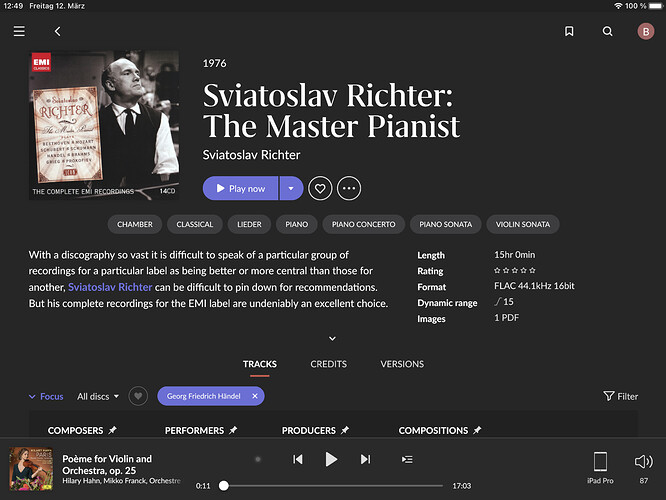 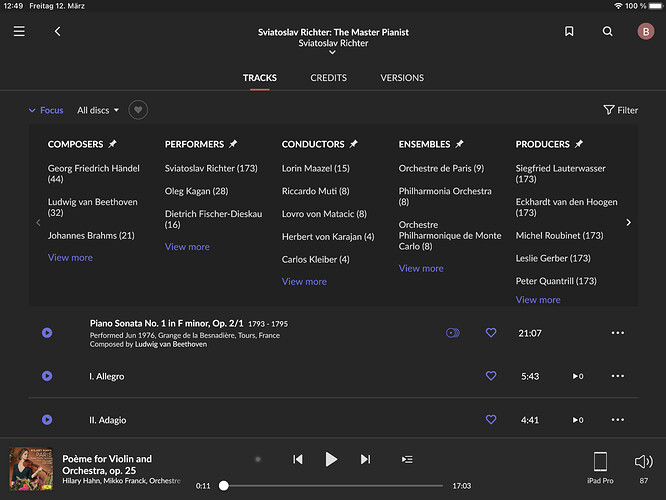 If I select the first Composer, Händel here, I get: 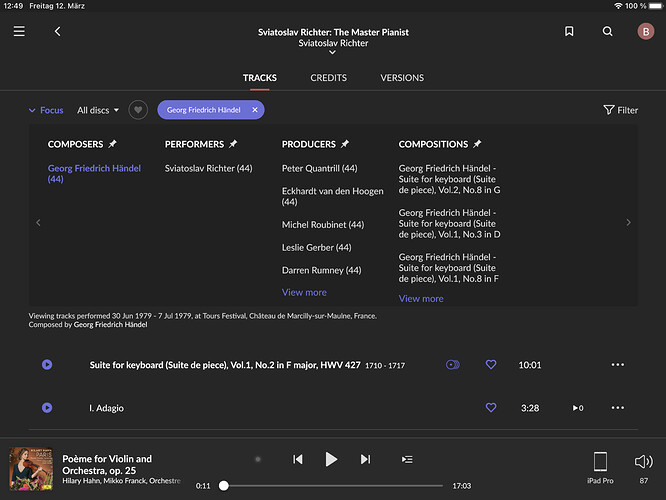 This probably does make sense, because if you show compositions on the first page on a multi-composer set, you get all mingeled up without knowing which is by whom.

So selecting first composer, then see his compositions on the set, seems ok to me.

Or am I missing something here?

lucky you… for me it does not make any difference 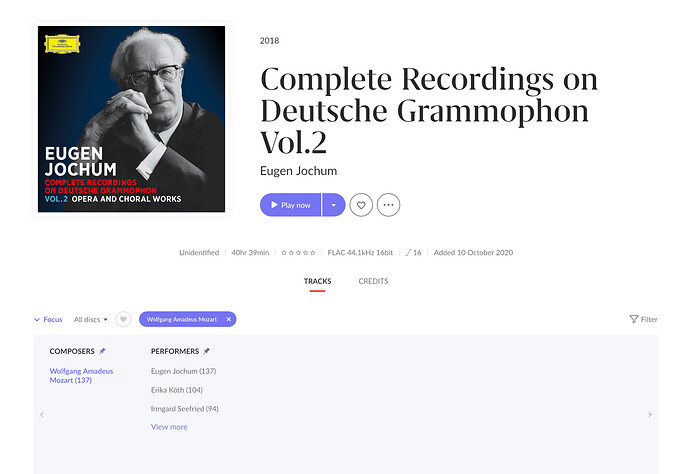 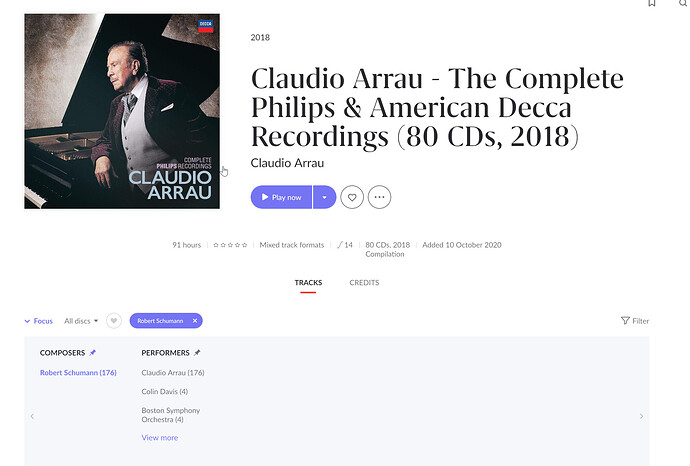 How weird is that ?? I look for some other boxes to see whether I can replicate what you see… First check Michelangeli on DG - compositions show up on second drill down level…

my complete Richter Box has the compositions in focus btw. I see them wheter I select a composer or not. 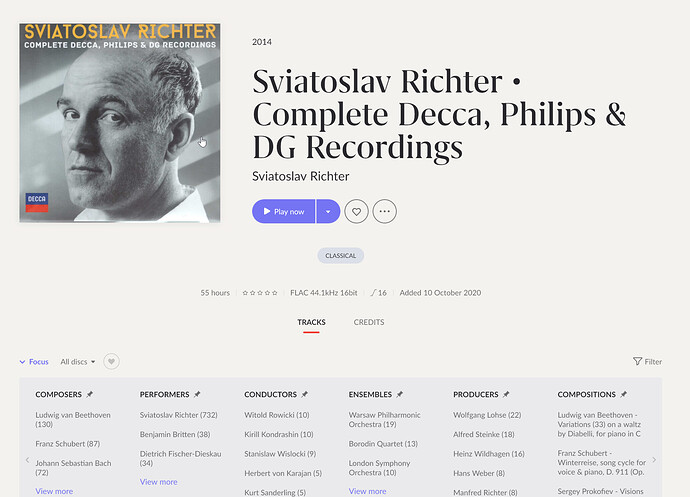 same for the 1st Jochum Box. Everything is there on the first level of focus. 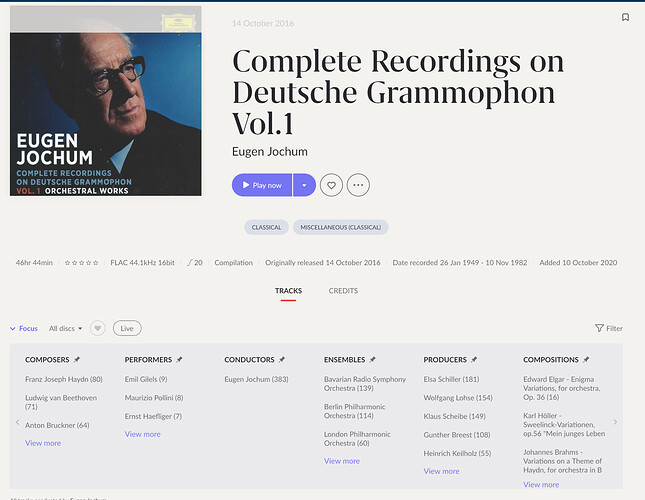 Then its indeed highly inconsistant if you sometimes get compositions on level1, sometimes level2 and sometimes not at all

This is a boxset of 2nd Viennese School with Sinopoli. Here I get Composers and Compositions on the first level of Focus. Nicely with Composer name in front of the Composition.

If it would show up consistantly on every box set just like that, it would be perfect: 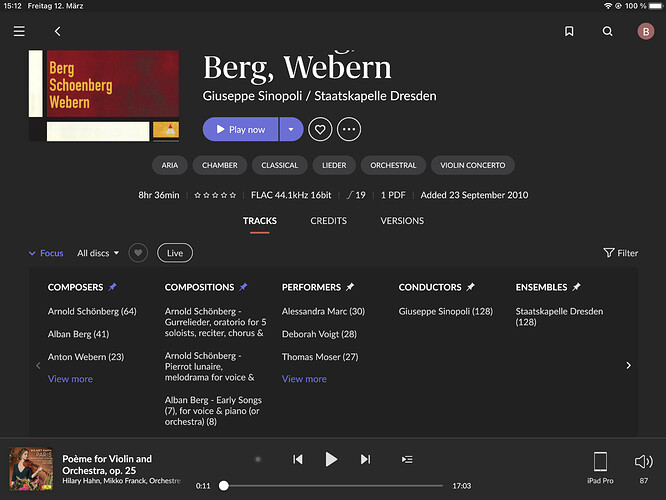 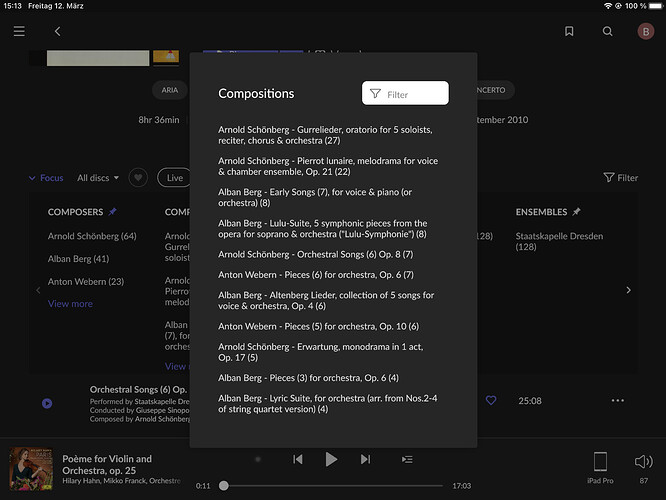 Then its indeed highly inconsistant if you sometimes get compositions on level1, sometimes level2 and sometimes not at all

I need to partially correct myself: Also on that Richter Box the compositions show at the first level of Focus. They were just hidden on the second page…

So the remaining question is, why this works for some boxsets and not for others?

I think the problem with albums not showing compositions is the lack of Classical genre tag. Add Classical as a genre to the box and the compositions will show up in Focus. 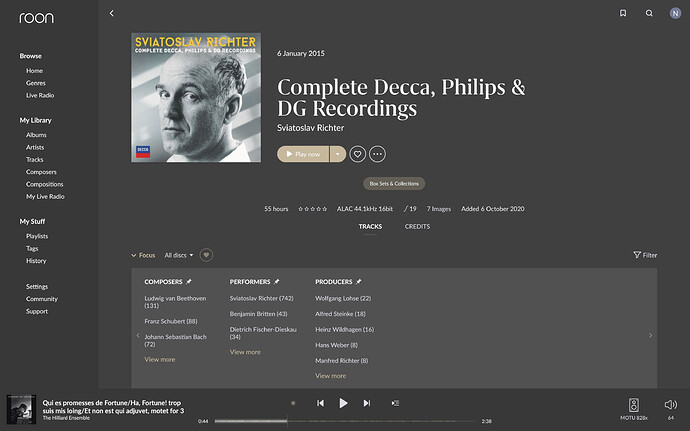 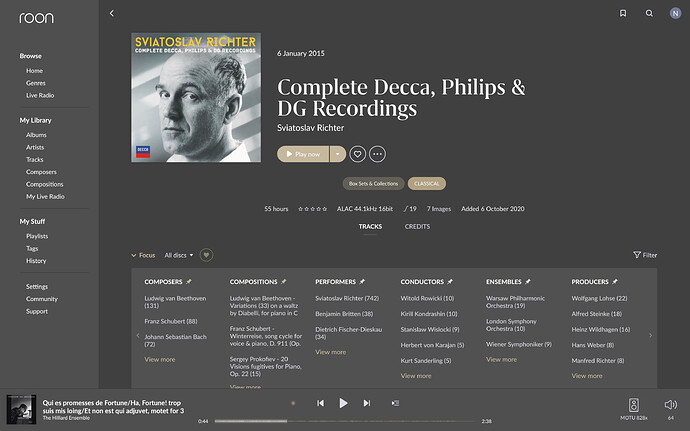 I think you cracked that one.

Looks like the answer, I added a Genre = Classical to an offending box with no Composition and they appeared

Confirmed on several other sets

I gave up on Karajan ,removed it, I will add back and test again

A workaround, but still a bug I guess

Karajan was also missing the Classical Genre, add it and Composition shows

who would have thought… it really seems to solve the issue. Thank you!

I think its a fix. it says somewhere in the KB that you need that genre for Roon to properly treat it. I add the link once I find it.

I had it mostly added, just 2 or 3 sets where it was missing and it now all makes sense. It makes box set navigation a lot more useful.

I just reimported all my big boxes , corrected Genre = Classical where it was missing ( a lot) and lo and behold things seem to be behaving themselves

Just in time to have the power cut off again for the second time today !!!

Someone told me Africa is not for pussies

Good to hear you got your boxsets now working as well 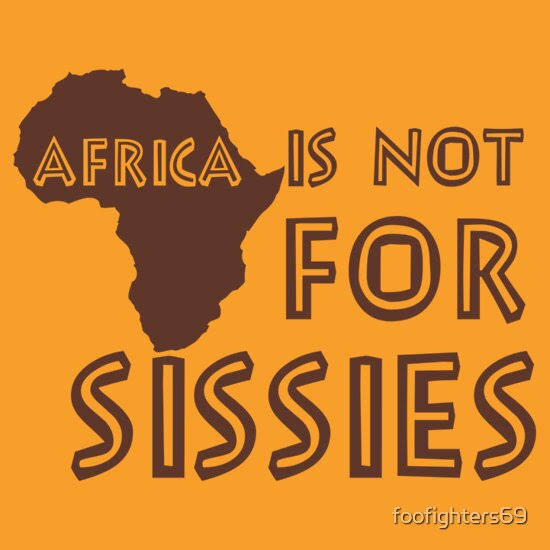