Reviews for Pop/Rock/Jazz songs are very patchy in roon. (This is often the case with album reviews also but that is not the point of this post)

Often it is the case that there are no song reviews on allmusic and I assume this is why there are none in roon. But where there are reviews of the core songbook in allmusic the treatment in roon seems inconsistent. It’s difficult to understand what sources roon is using for song reviews.

For example, my roon has no review for Bob Dylan’s “Like a Rolling Stone”: 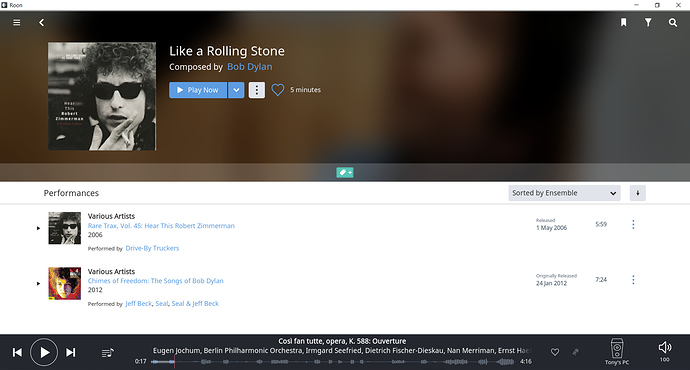 But there is a lengthy review on allmusic:

Song information for Like a Rolling Stone - Bob Dylan on AllMusic

On the other hand there is no review on allmusic for Hoagy Charmichael’s “Stardust”:

And yet in roon there is a review: 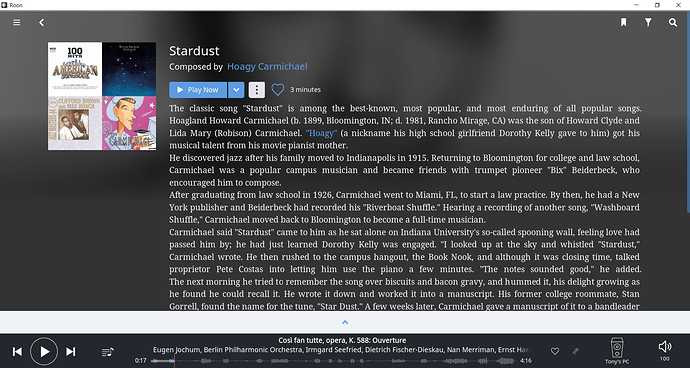 Is there an explanation for this behavior? Is it at least possible where there is a review in allmusic that it should appear in roon?

Interesting! Didn’t even know that AllMusic had (single) song reviews.

On the other hand there is no review on allmusic for Hoagy Charmichael’s “Stardust”:

Update: so if there’s a composition review in Allmusic then Roon shows it like it does for “classic” compositions.

Yes. It’s the “pop” equivalent of a “classical” composition. In fact roon treats a pop song as a single-part equivalent to a multi-part classical composition.

On other threads roonies are starting to find the same problems the rest of us have been having with Classical for years. It can be very difficult to force roon to recognise fully or even partially a pop song as a composition. it is often far from automatic and sometimes impossible.

I’m surprised this doesn’t have a priority. Seems very roon to me.

Didn’t know that Roon has reviews for songs

And now I didn’t find one in my collection.
Can I focus on songs with reviews? See that for albums but not for tracks.

Interesting. That’s the one that’s ended up in my roon. I couldn’t find it in allmusic as there area a lot of empty links.

Doesn’t alter the point that that i have a lot of empty song reviews in roon when there are reviews in allmusic.

These types of “gaps” and issues at a “composition” level have been raised in Classical threads for years. But it is often being treated as an edge case whereas exactly the same issues exist with Pop/Rock/Jazz. I think it’s a big gap if roon is inconsistently connecting your pop library at a composition level. Having an overview on all your “covers” allows you to build much more interesting playlists and would also allow roon to build much more interesting radio queues.

Doesn’t alter the point that that i have a lot of empty song reviews in roon when there are reviews in allmusic.

I don’t think you have any “song reviews” in your library. The reviews are actually tied to “composition”. I’m not arguing about that it would be nice to have song reviews - but that is a feature not currently implemented; would require a description tied to tracks I guess.

Yes. That’s correct as far as I can see in order to get a review roon must treat the song as a composition.

If you add a composer to a track/song without one, you will see that process at work. Roon then treats the track as a composition. Any time I have tried it, I see an additional “go to composition” link in the three dots next to the track. If roon already has composer credits from metadata you will also see that link. I haven’t noticed any difference in behaviour whether composer is auto or manually populated.

But any other “composition” behavior other than that three dots link is inconsistent:

All these points seem to come up periodically. There must be some criteria roon uses to promote a track to a composition but it is not clear what. This is the latest thread raising these issues:

You know that little square with a disc icon telling you how many other performance you have of the same song ?.. turns out I’d like to add some track as being the same composition (for some reason roon didn’t catch them all, they do share the exact same track name though) Is this possible ? How ? Tia

I don’t see this as a feature request. The way in which roon is treating a composition has long caused problems on Classical threads. I see the behavior being experienced with pop libraries as shedding extra light. It would be nice if this were consistent.

@danny said long ago that AllMusic/Tivo did not allow Roon to use the individual song reviews. A shame, because that’s an example of actual rich metadata…

Ok. Didn’t know that. Does anyone know why some are coming through?

While I fully get the point you make (or so I think) there’s one thing I’d like to add: what is perceived as inconsistent most likely is consistent according to the rules Roon had to put into place to identify proper relations between metadata. This hopefully will (continue to) get better. What we may see as random behaviour is based on rather conservative matching rules to avoid false relations and / or just shows the evolution of metadata and metadata handling within the “metadata cloud” where all the “magic” happens. For every “sometimes” you mention the underlying logic would be perfectly clear if you knew the rules Roon used. Not that it would improve the experience if you’d know the reasons for the matching decisions Roon makes - but it’s not inconsistent. It’s just not obvious.

Personally I’m almost as doubt- as I’m hopeful that we’ll see major progress without heavy invest into good metadata AI as well as into own metadata and improved sourcing but it’s far too soon to give up on it.

Does anyone know why some are coming through?

Those reviews come thru as composition reviews. And obviously this works with Allmusic.

We’ll just have to agree to disagree on that.

My own view is that being consistently inconsistent from a user experience perspective is an extremely low bar indeed.

I fully agree that the UX is like you described it.

And insofar as it will only improve with better / more intelligent metadata handling it’s indeed a metadata issue.

Only if you would also want “song” reviews at a track level it would be a new feature.

My point was that the programmed logic which generates the low bar experience probably is consistent but insufficient for the complexity of the task at hand - an it will be perceived as bad UX. So you are right.

I had a chat with the team about this today, and wanted to give you a little information about what you’re seeing here. Currently these inconsistencies are caused by inconsistencies from our metadata providers. The way that TiVo handles composition reviews is unfortunately not consistent between their different teams, which is why things appear this way in Roon.

This is something we are always looking into improving and hope to make things more consistent in the future.

Thank you for the report, we really appreciate this type of feedback.