Editing track as being another performance of the same song/composition

You know that little square with a disc icon telling you how many other performance you have of the same song ?..
turns out I’d like to add some track as being the same composition (for some reason roon didn’t catch them all, they do share the exact same track name though)
Is this possible ?
How ?
Tia

Can you share screenshots of an example of this? 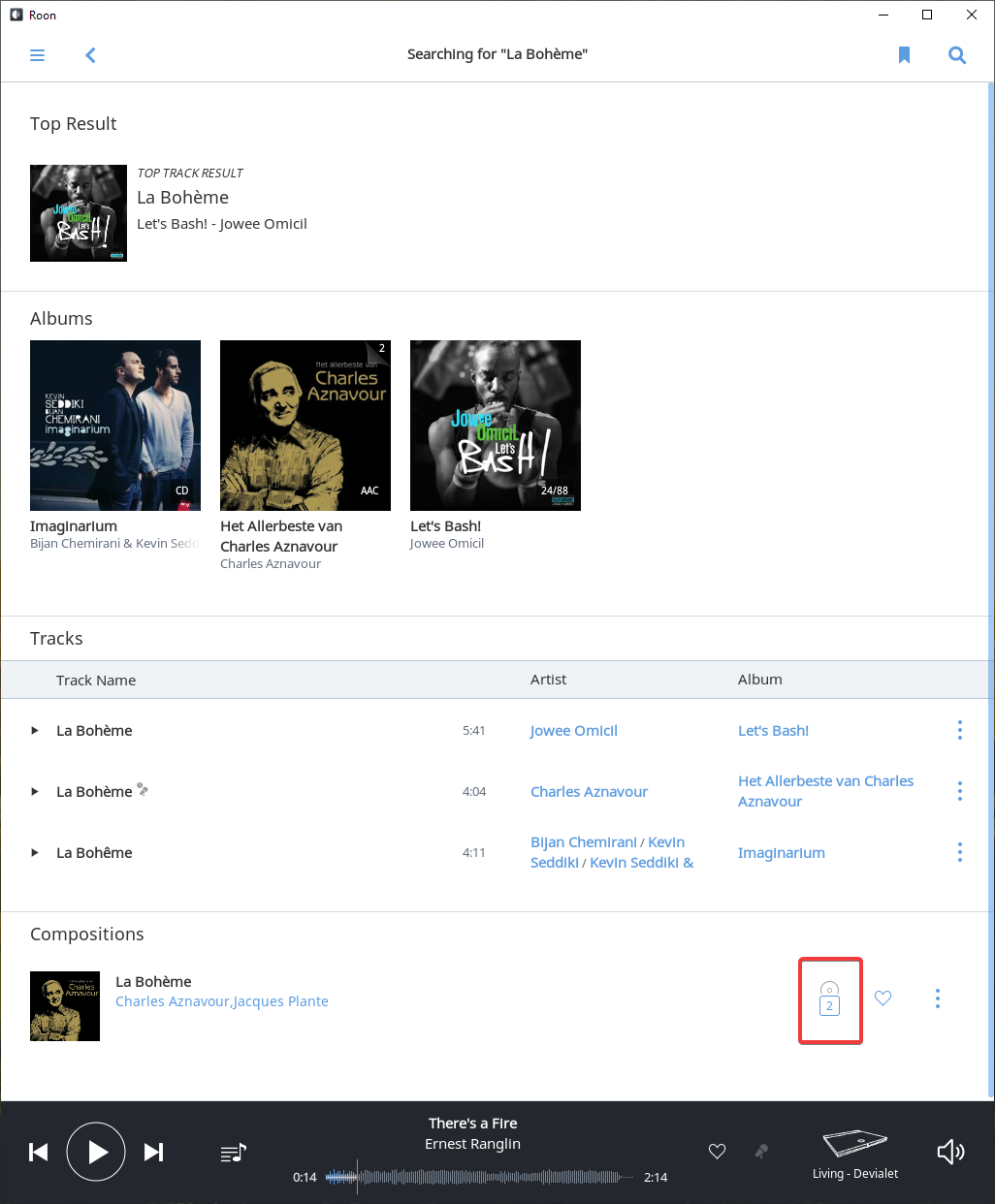 under “Tracks”, the 3 tracks are actually different performance of the same composition, yet the “other performances” icon (highlighted in red) shows only 2 occurrence of this composition as shown on the next screen when clicking on the icon: 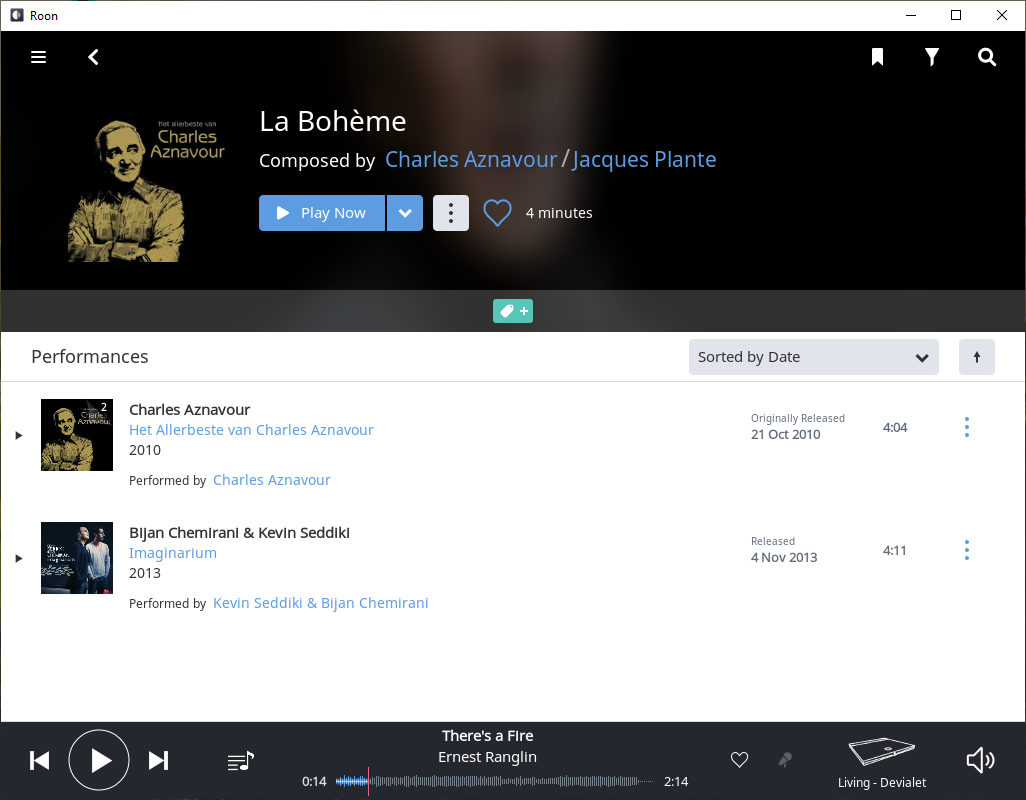 Is there a way to tell roon the track from Jowee Omicil is also a performance of this same composition ?

Most of the time when this happens to me it is because there is no composer credit. It also happens when the composer credit has a slightly different spelling. Maybe missing an accent.

It can be difficult to see that unless you switch on composer credits display to “always” in settings. But there lie dragons. You will then realise how many Pop/Rock/Jazz composer credits are missing and how little of your library is actually joined up by composition.

It’s less of a problem with Classical but on a lot of pop music everyone in the studio that day can get a composer credit so you may have to make sure all the songs composer credits are aligned. The worse case I’ve seen was for 8/9 composer credits. I don’t remember now. I think it was Earth Wind & Fire.

If you are lucky then roon will match up the performance and you don’t need to do anything more. If you are unlucky you are going to have to go to the composition screen, filter on your compositions and “merge” all your instances. Sometimes, and I have no idea why you will also need to populate the WORK tag with the track title even though the song is not multi-part. 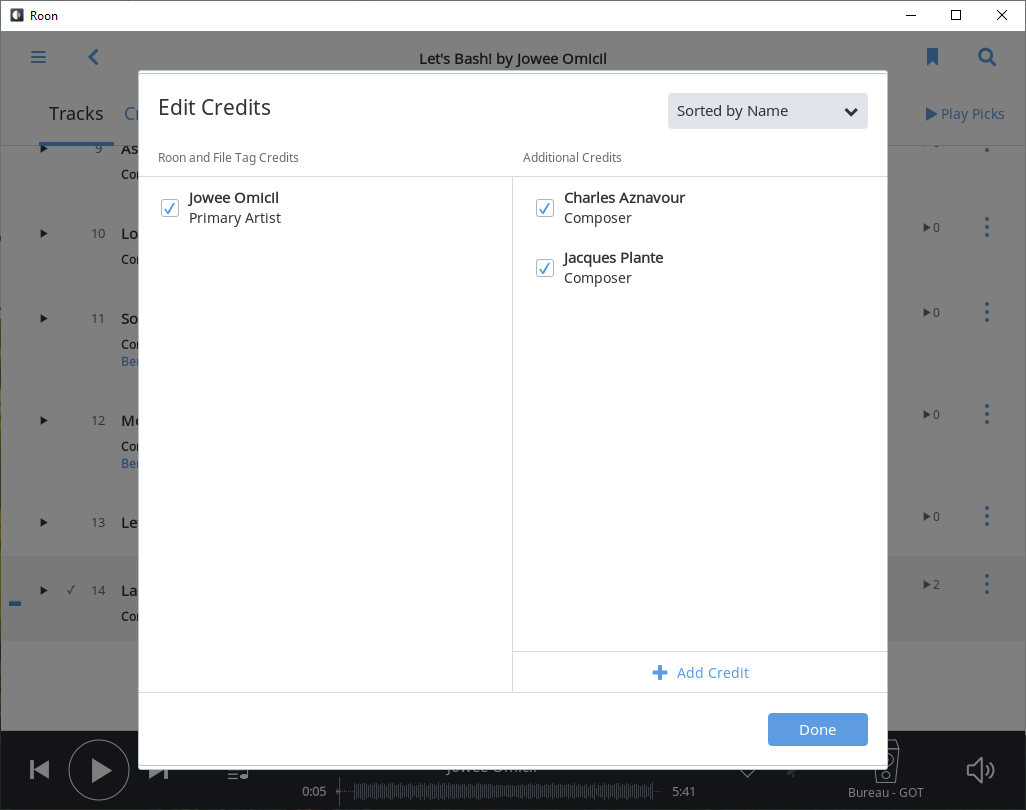 I guess I’m unlucky, Unfortunately that didn’t help.
Also the composition screen doesn’t list the track I’d like to merge with the 2 others (listed)
and I don’t remember seeing a WORK tag anywhere…

There are a number of custom tags including WORK, PART, PERSONNEL, ENSEMBLE and a few others that roon will recognise. But to make use of them you will need to configure a 3rd party tagger and tag your files directly externally to roon. If you are not using a tagger already there will be a steep learning curve. Suggest you wait for support to respond. they may have a different solution.

external tagger isn’t a issue, yet this doesn’t sound right.
I’d love to hear info on how the composition mechanism actually works

What I would like very much (and have suggested before):

I’m not sure if this is the same problem, but…

If the album has been identified and composers attributed but not for all tracks, then I usually find that I cannot properly add composers to the missing tracks. That is, composers will appear in the track credits, but it is not a composition (there is no go to composition in the 3 dot track menu and it does not appear in the compositions listing)

This is a known bug. See

In case others come across this, it has been identified as a problem. Roon have stated… Our theory is that it was caused by one of metadata services giving an information which Roon didn’t interpreted 100% correctly. So, now we have an opened ticket for the issue, and I hope our developer team will fix it In this instance, I associated the album with an alternative and the problem went away. Brian

Thanks for the answer Brian,
That seems to be the case. There are 2 bonus track in this album that miss credit data and they both have no “go to composition” in their album view menu.
This seems to be a common issue and I’d expect to be able to fix it by either filling the proper composer info or being able to merge the composition, alas none works…
so if not a bug, this is clearly a shortcoming… that doesn’t seems to get a lot of attention from the devs so far.

My little trick of populating the WORK tag doesn’t seem to work any more although I’m pretty sure it did a release or two ago.

My little trick of populating the WORK tag doesn’t seem to work any more although I’m pretty sure it did a release or two ago.

Odd, it worked here a week or two ago for me on the latest release. Are you sure that you did as suggested in the best practice article:

Note : Where you add multi-part file tags to an identified album, then you should “Prefer File” metadata in the Album Editor / Metadata Preference / Multi-Part Composition Grouping setting.

I don’t think it’s what you are thinking. This is for single-part pop songs. Not multi-part classical compositions. That behaves as expected.

I, like several posters here get inconsistent identification of single-part Pop/Rock/Jazz compositions. It’s not really clear what needs to be populated. Often, as with several posters here using canonical song names, composer credits etc. from allmusic will still not get a composition identification for a pop song. But I found by trial and error additional edits to the composition period, date and also copying the track title to WORK did the trick in the past. I have just tried and it is this “trick” that no longer seems to work.

Ah, OK, thanks for the clarification…

Wondering the same thing - can tracks somehow manually be merged to a performance? I’m currently working on trying to find a process to make Roon work with Mosaic box-sets. These contains quite a few alternative take tracks, and so far none have been recognised as an alternative performance. Tagging is done, with the same composer as the main track. The only things I can see differs is that the alternative track names have additional information. For example:

The result is that Roon still does not group them together into the same “Performances”:

Is this an identified album? There is a problem with partial Roon supplied metadata - see my post above.
Try unidentifying it and see if Roon now groups. (Identify and say no to offered matches and use basic file metadata only)

Yes, the box is identified. Un-identifying makes no difference, but retried just to make sure and indeed same result.

In cases like this, I give up trying to make the connection automatically and go to compositions, find the tracks (use the filter) and merge them.