Indentified album in Tidal is not id'd when from hdd

Hi @support, bit frustrating this one.

I have this album 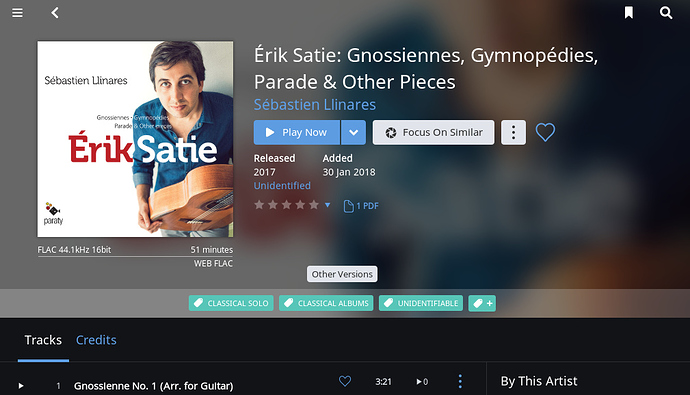 which is entirely unidentifiable in Roon (yes i have tried to manually identify and modified many text string options to try and get it to recognise the album or even the artist at all), but is available IDENTICALLY, AND identified by Roon in Tidal and directly linkable to the tidal version in “other versions” in Roon 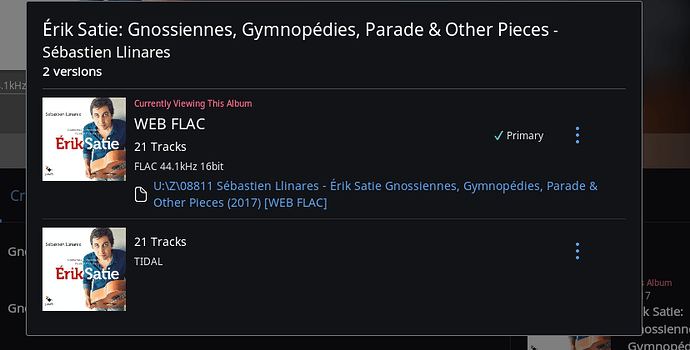 Please can you check into this and advise further?

We do have non-TIDAL metadata for this album, but only at the album level (no track info). You should be able to find it using the following search terms:

thanks Joel, found it!

But it was more of a comment on the fact that if an identical Tidal album is identified and related as “other version” by Roon to HD version, then why the need to painstakingly try and identify it manually at all?

if an identical Tidal album is identified and related as “other version” by Roon to HD version, then why the need to painstakingly try and identify it manually at all

It’s a good question. In short, duplicate detection is independent of the identification process; keeping these processes separate is an important part of the Roon Core design (mainly for performance reasons). An independent identification process is important because we attempt to find the very best match to your specific version, but perhaps there is room for improvement here. The bottom line is that we don’t have non-TIDAL track level metadata which is critical for identifying a non-TIDAL version.

We’re working on a system which should produce better equivalences between albums (and artists/performers). This may allow us do something a bit smarter in the future with regard to identification, but that’s not imminent.

and thanks for explanation and helping out id-ing that specific album.

Roon is both incredibly great and excruciatingly poor Roon Software

I understand what you mean. Within the Roon clientele itself we could pool our accurately metadata tagged albums rather like the way in which Roon has been asking for assistance with language translations. Then Roon could prioritise this Metadata over Rovi stuff, or apply logical comparisons to flag gross discrepancies. Especially for unidentifiable albums, this would be very useful. It should be noted that the people who have the best sucess in identifying albums are the ones who meticulously…