Individual tracks of a single opus are imported as separate compositions

I have a Nucleus to which I have added a 2TB internal SSD, and my music collection resides in iTunes on my Mac Pro. I exported it to the Nucleus over SMB, but as some point I am going to copy the files to the Nucleus internal storage. I expect I will keep managing music in iTunes and copying to Roon Core.

On my first attempt, I was getting a lot of duplicate composers, e.g. “John Adams” and “Adams”. Switching my iTunes tagging convention from “{LAST NAME}” to “{LAST NAME}, {FIRST NAME}” solved the composer duplication.

My iTunes organization is:

Here is the work as it’s tagged in iTunes:

and how they are being imported in Roon:

Now that composition has a link to the album title “Shaker Loops”:

and somewhere at least it appears as a single work, but not in the compositions: 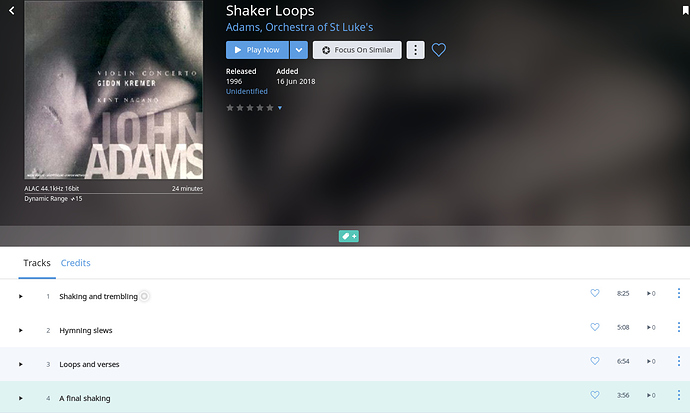 I don’t understand why they are being imported as separate compositions. On disk, they are all in a single folder:

You say “on disk, they are all in a separate folder” - do you mean just this composition (Shaker Loops), or the complete content of the album (which also has the John Adams Violin Concerto)? I ask, because from your screenshot, Roon has marked the album as “Unidentified”.

Roon certainly knows about the album (here’s a screenshot of the album which I’ve just added to my library from TIDAL): 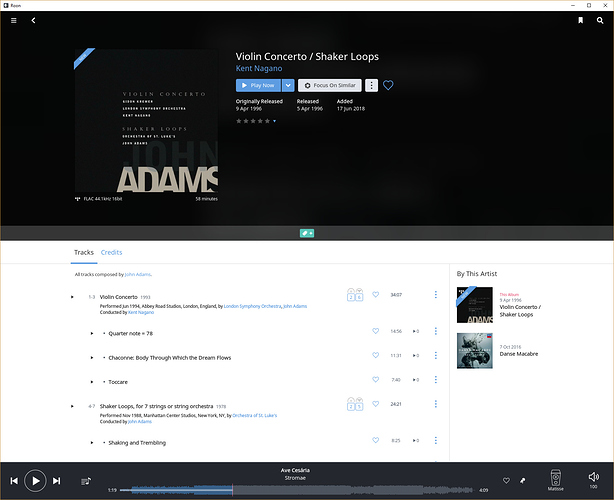 Separate directories for the two works on CD. I do this for everything, and renumber the tracks as well. Elektra Nonesuch’s packaging/bundling decisions are irrelevant to the actual works. In any case, this specific CD/album doesn’t seem to be in Roon Labs’ database.

Well, there’s the issue. Roon knows about compositions and performances and albums. And I suspect its starting point for identifying albums is to look at what’s in a folder. If you don’t have a complete set of tracks there, then it’s going to have extreme difficulty in identifying the album.

I think you’re going to be doing a lot of merging of unidentified albums.

Hmmm. I wonder if I can use the file creation timestamps (since the files would be ripped at the same time) to reverse engineer the original album structure from my normalized one. Not sure how I would get the track numbers back, though.

You’re probably better off using the merge function, and leaving the directories as they are. Once Roon knows where the individual directories are, and how they are related to released albums, the job is done.

Perhaps, but why is Roon defaulting to one composition per track instead of one composition per album based on the file tags when the album is unidentified? That default makes no sense whatsoever. I am not going to manually merge from ten thousand albums in my collection. If they had an API, that would be another thing.

Have you actually got your tracks tagged by WORK and PART metadata tags? Then you could tell Roon to prefer file data, which might help. 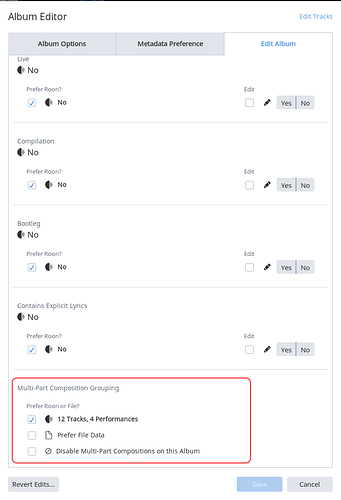 iTunes doesn’t have a concept of WORK or PART. Are those mapped to other iTunes fields like Grouping?

Also, almost all my files are in ALAC format. I am not sure if the format supports WORK or PART tags, I am certainly not seeing them in “View File Info/File Tags”.

Sorry, I know nothing about the ALAC format. I’m not an Apple/iTunes user.

I’m afraid I also get the feeling that the structure of your current collection is not something that the automatic import processes of Roon are equipped to deal with. Perhaps @support have some suggestions to make?

OK, so it looks like Apple added work/movement support to iTunes 12.5: iTunes will become much better for classical music very soon.

I’ll see if I can work around my problems using this.