A friend of mine who uses a Hugo 2 to drive high-end Focal and Hifiman cans (and influenced my move to Hugo 2) mentioned an interesting headphone amp, the THX AAA 789. It is based on a technology and topology developed by TXH. It is available from Massdrop. Amir likes it. My friend likes it, and it impressed me in a quick listen. And it costs $350. I didn’t need another headphone amp, but $350 is within my tech exploration budget.

It arrived, I connected it to the Hugo 2, and after a few days I am very happy. Is it better than the Hugo 2 amp stage? I don’t know and I don’t care, read reviews if you are into comparative ratings.

The question is, what RAAT endpoint and DAC do I drive it with? Using the Hugo 2 is silly, it already has a great amp, and the prices are not aligned. The Meridian 818 is equally silly, and has an awkward user interface for switching between speakers and headphones (and have to switch Roon DSP as well). Qutest, Directstream, all great but the price mismatch…

What is available near the $350 point, and sounds nearly as good as the Hugo 2 and Meridian? The Schiit Modi — Darko and others like it, Amir does not, but even the fans don’t rate it at Hugo level.

Suggestions? And let’s not forget the streaming endpoint.

EDIT One interesting problem is that all low cost DAC include a headphone amp, which I dont want. Pure DACs seem to start at $2000 or so.

EDIT One interesting problem is that all low cost DAC include a headphone amp, which I dont want. Pure DACs seem to start at $2000 or so.

And of course, there’s a Chord Mojo…

I would ignore the headphone outputs for any of the above but if that’s an issue, it becomes a struggle (as you’ve found).

For endpoint, iOS over WiFi with the Apple Camera Kit adapter? With a USB powerbank connected to the Apple adapter if the DAC needs to be USB powered?

Yes, in fact I got a Dragonfly and feed it from an iPad, under the same principle of tech exploration, and to promote mobility around the house (and because @RBM recommended it). But I’ve only used the Dragonfly as a unit, never tried daisy-chaining it with an analog amp.

And the iOS device makes for an excellent streamer. Feeding the Hugo2, the whole zone is free of AC connection.

Interesting. And wacky since the 789 is AC powered.

No worries at all mate. Plenty of options. Best of luck with the exploration.

After some failed attempts I finally ordered one on massdrop. There are stories that someone bought 300 pieces and resells them on ebay.

You’re lucky Dick… and the eBay prices might be going higher than previously. 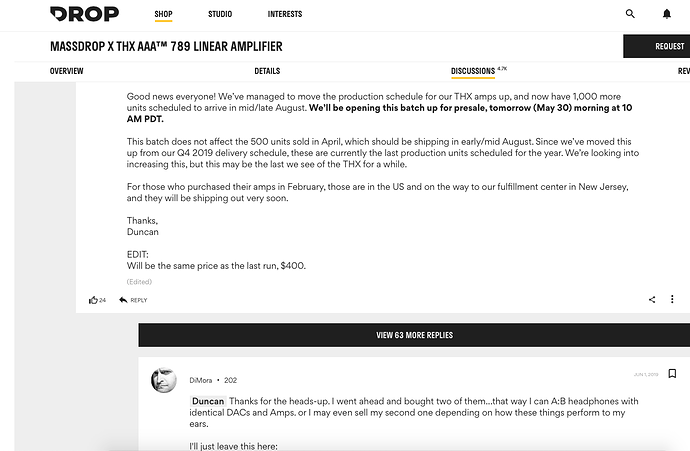 Massdrop price is up also, I paid USD 400. Ships end of august

What’s this to be paired with Dick? Your new headphone streamer or something else?

I wish Massdrop would make a version with a DAC at the same quality level as the amp. R2R? SPDIF and USB would be fine. A DigiOne/S or one of the rendus would be a nice match

Can be ordered again and is also branded as ‘Drop’ now.