I’m a new user, in the first month of subscription. I built the core on a MacBook Air I5 (early 2015), connected to the NAS by ethernet and the endpoints by ethernet and/or Wifi. All goes well, with an occasional stutter (lost connection by Roon) in 192/24 files from the local NAS.
So I did test the Internet and local network speeds from the core machine.
Results in the screenshots: 350/35 mbps Internet and 700/525 mbps local.
My questions: are these speeds enough for Roon? Or are there other things to consider? 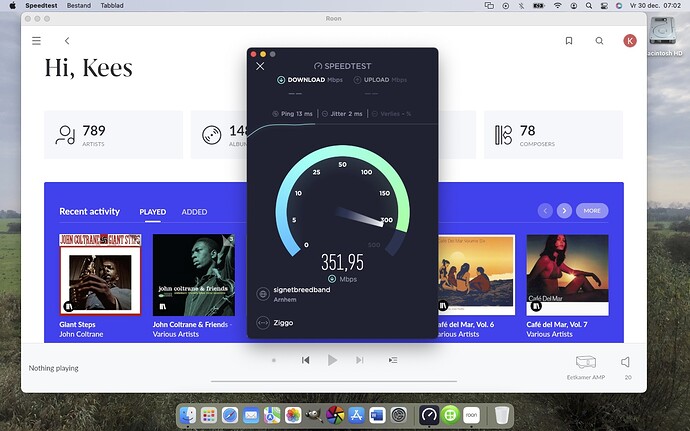 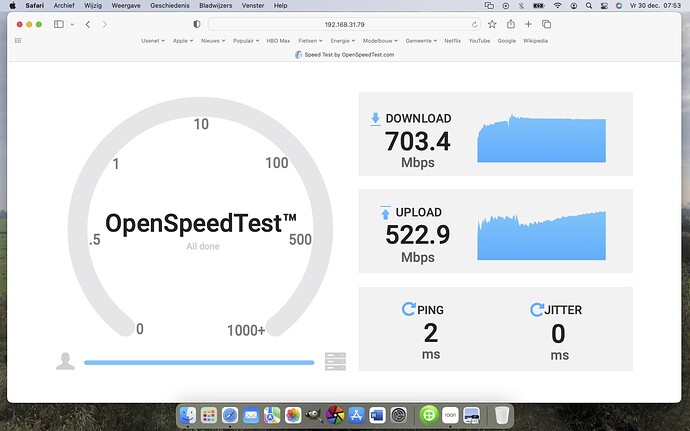 hi Kees
If you lose the NAS check to have the same ip and the waking time of it. I did have the NAS on DHCP and while it was sleeping an old iMac got his ip.
Best to have roon core directly hardwired on router and the NAS also. I cannot do that but I have all endpoints and core and nas on the same switch.

If you have any issues it’s due to the Core being on WLAN.
While this can work just fine, “your mileage may vary” due to circumstance. I’d say a 5Ghz WLAN is crucial for proper transfer speeds as an example.

Speed is nearly meaningless in comparison to latency. At least that is my experience. Almost any home network can carry the nominal payload of a 24/192 stream. But can it do so without dropouts?

For instance se below. Many users would say having your core wired through a home run to your router or primary switch is a must. Endpoints can be wireless but may experience issues in which case experimenting with wiring is a first port of call.

For the longest time I could not stream 192/24 bit, my streamer was networked via wifi. I finally took a day and ran ~100 feet of 6a network cable from the router to the streamer and wow, what a difference. No issues anymore. Epic as I had to route outside the house, but a few hardware store trips on and finally done.

OK. So when I want to add a streaming service, I should be good. Right now only using Spotify which is not a part of the Roon setup…

Thxs. The NAS uses a static address in the network layout, so that should be good. The core and the NAS are, so to speak, one switch apart, which is also the case for the core and the Router.
The speedtest is done from NAS to core.
My endpoints are a different story…

Thxs. I think you are pointing me in the right direction. Since I’m using Sonos connect amps and a Sonos connect as endpoints, the weakest link in the current setup is the Wifi connection between the core and the endpoints. Sonos boxes only use 2,4Ghz WLAN. Yesterday I even had a (short) stutter on a different file…

You would need to do a trial to determine that.

Thxs for the answers, much appreciated. As mentioned, I think you are right about the WLAN part of the setup. So here’s my strategy to check this out:
I’m using the Sonos connect via the optical out as endpoint for a Yamaha R-N301 receiver. To change this setup and get a wired connection, I’m building a Ropieee endpoint with a Digibord and connect that with the coax out into the receiver.
For one of the Sonos connect:amp’s I’m building a Ropieee with DAC and connect that one into the analog input of the connect:amp.
Because both Connects can be wired into the ethernet I’m then 100% wired.
I’m guessing that will do the trick.

I might be misunderstanding here, but why don’t you simply wire the Sonos products? They all have ethernet connectivity afaicr?
Ues, ypull have onther benefits by going Pi/RAAT, like grouping and (likely) improved quality.

why don’t you simply wire the Sonos products

Or connect the problem ones to a the Ethernet port on a mesh router satellite, then you have hardwired wireless. Much better then using the Sonos WiFi.

May get expensive wiring them all, but I bet a good mesh network with well placed satellites would work very well.

Thx for the ideas. Actually, the two connect amps are already wired onto mesh satellites; one play:3 (1 gen) is wireless. My play:5 (1 gen) is also wireless in the garden (when in use). The Connect is also wired.
I tried to run them without Wifi to no avail. They apparently need wifi (or Sonos wireless) to function. The occasional stutters are happening on all the boxes, I suspect a “generic Sonos wireless” problem.
Anyway, I will see what happens when the ropieee’s are installed…

Just for the record: this is a minor point in the total Roon experience - feels like I’m going to really like it…

Update:
I got the first RBpi with Ropieee running - this one has the Hifiberry digi+ hat. Placed next to the core, on the same switch as the core and receiver, one extra switch away from the NAS.The second one is waiting for the Hifiberry DAC2 pro, which will be here t’row.

Let’s see what’s going to happen with Roon, the network, stutters and the most important: the MQ! 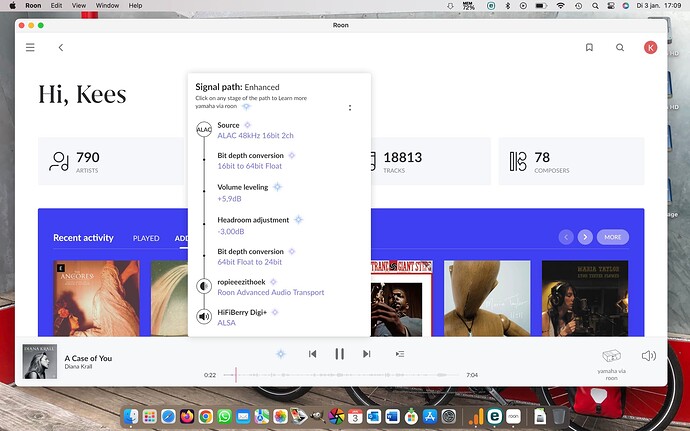 a few hours later; running the “big files” now…
so far so good… 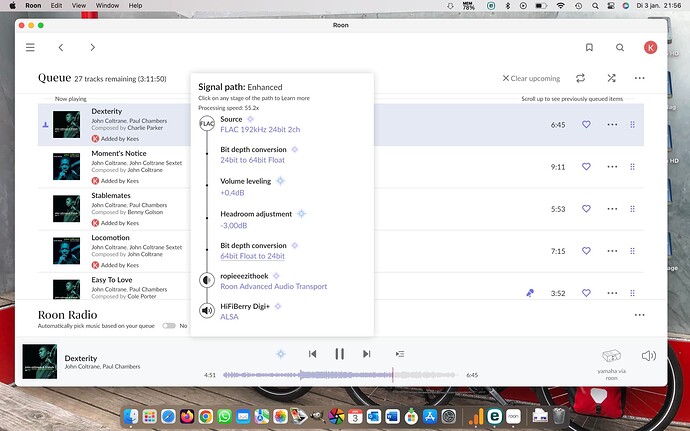 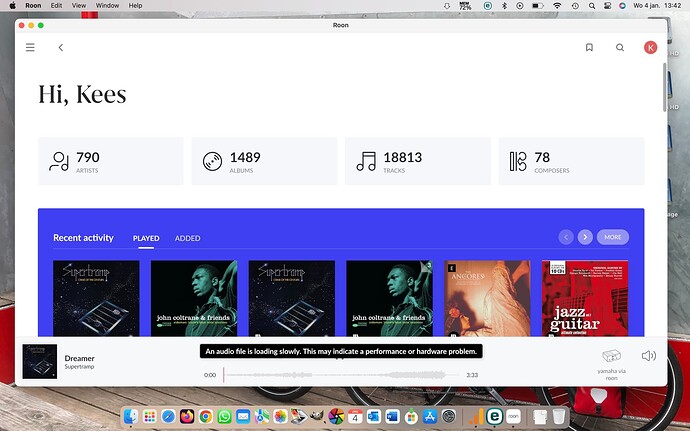 At least I know where to look now…

Transferred 192/24 files to the SSD in the Core machine and that solved the issue - I’m going to investigate all the components: NAS - cables - switches etc. to find and eliminate the problem, although not really necessary…

final update: these stutters are sporadic - not more then one or two every day…

Just to make sure I got it… You were getting dropouts/gaps with 192/24 files that were located on a NAS, with a core on a laptop? You moved the hi-res files to the laptop and it’s mostly but not completely cured? And the endpoints that are still occasionally experiencing dropouts are WiFi?

After the move the dropouts are gone completely. On the wifi endpoints (Sonos boxes) and the wired one (ropieee on rbpi with hifiberry digi+ into Yamaha receiver) All other file formats play from the NAS without problems on all endpoints. So finetuning the cabled connection between Core and NAS will cure the problem that is non-existing after the move; but it’s fun to do!
Thxs for the answer.

For what it’s worth, I have found during my experimentation phase that putting all my audio on a single USB SSD enclosure (cheap enclosure from Amazon, more expensive/reliable SSD) has enabled me to more easily move my core. As I got more into it I went from NAS-hosted core, to a NUC with windows, to the same NUC with a ROCK. Though once you have your core set up it should be set it and forget it, just listening to how you’re enjoying tinkering I won’t be surprised if you follow a similar path. If so, having a set of music files that you can “sneakernet” is helpful both for core portability and offsite backup (unless you’re also doing glacier or something like that).

exactly! I’ve already taken an old SATA ssd with a sata/usb connector hooked on my router. The core is also reading that ssd as a samba share. So I’m free to swap the core around so to speak. This setting up of hardware and software is indeed a part of the fun for me!
Guess I’ll be on an annual fee next month…