Kudos for the iOS switches with the new release. Was a long journey. I hope this will finally fix it for us.

Can you tell more to those of us who put our subscriptions on pause? Has this been fixed finally?

Paused. And this will only be reverted if the crashes stopped with certainty.

I started up the new version to be greeted with a crash in 10 seconds. Feels so cheap.

@support - as you are indicating that this issue to produce itself on a limited number of IOS devices, why don’t you exchange a good working device with a Roon user who has a ‘crahing one’.
Or just offer to buy the damned thing.
Dirk

Thanks to those of you who submitted your device data, it was a huge help and I’m happy to say that Roon 1.8 (Build 806) included some notable changes based on your feedback. Below, I’ll summarize each change and what to do next.

We had an iOS device in-house that would often crash within 30s of starting Build 795. Getting out of this state necessitated rebooting the device. We eventually discovered that a duplicate network interface left behind by a VPN app was causing the crash. After deploying this fix and updating to Build 806, this device no longer crashes on startup!

While that’s great news, it should be noted that this was a surgical change meant only to fix those of you who might also have duplicate network interfaces causing crashes. If you’re not crashing after startup, then it’s likely you won’t benefit from this fix. 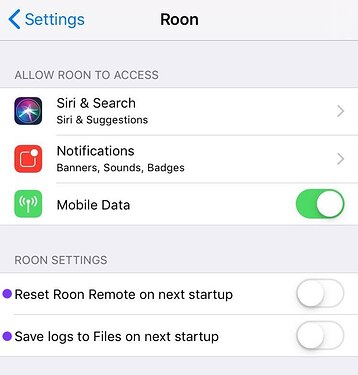 Reset Roon Remote on next startup

This setting allows you to wipe Roon Remote data without having to re-install the app. This will typically be used by the support team during the troubleshooting process. Or, if a re-install fixes your crashes (as some of you have noted) this is a quicker way to achieve the same result.

Note: This setting does not persist between sessions.

Save logs to Files on next startup

One of the major difficulties with startup crashes on any platform is collecting meaningful logs. With this setting, Roon will enable more verbose logging and save a copy of those logs to your Files, making sure they don’t get wiped during a crash.

Note: This setting does not persist between sessions.

We want to gather another round of data to see what progress has been made since Build 806. We’re also looking for more information about your network interfaces and have included instructions in the form below to help us collect that info.

If you’re still crashing after updating to Build 806, please fill out this form.

Fill out this form.

After you submit your data, we may reach out to you privately so we can grab verbose logs and put together a thorough report for our R&D team.

Thanks all! We’ll follow up with updates as we have them, and again, we’re so grateful for your continued patience and cooperation as we work to improve the experience on iOS.

The speed of my Roon remotes improved a lot after fixing Ubuntu 20.04 MDNS issues. Haven’t had crashes since but am scared they will return. The local lookups were slow before this.

These are the settings I changed in relation to MDNS on Ubuntu: https://askubuntu.com/a/1280397

We are still looking to collect data as mentioned by Kevin above:

Hi folks, Thanks to those of you who submitted your device data, it was a huge help and I’m happy to say that Roon 1.8 (Build 806) included some notable changes based on your feedback. Below, I’ll summarize each change and what to do next. Fixed a bug where duplicated network interfaces on iOS could trigger crash We had an iOS device in-house that would often crash within 30s of starting Build 795. Getting out of this state necessitated rebooting the device. We eventually discovered that a du…

If you’re seeing this issue still, please fill out this form. Alternatively, if you’ve seen any changes after the most recent update, please let us know!

The recent fix seems to have resolved the problem for me—haven’t had a crash in quite a while, which is highly unusual. It’s taken a while, but pls accept my thanks for dedicating the resources into investigating the issue.

Same here. Thanks for fixing this. Took a bit of time but seems done now.

I can also confirm that this issue has been resolved for me.

The fix mentions “duplicated network interfaces” - I run a google mesh Wi-Fi router so 2x access points for the same SSID. Perhaps that was causing this scenario on my device?

Anyway, long time coming but thanks for the fix.

I still get the crash after doing the “Roon Reset Remote on next startup” procedure. I submitted the new form along with the requested Network Utilities output.

@support, I find it a bit strange that you have chosen to save crash data into a local file. There are services like AppCenter which provide a very simple integration into your source code and allow automated reporting of crashes. I would suggest to implement that instead of asking users to enable some setting specifically when they get frustrated enough to actually start investigating what options they have.
This way you would get crash info from all users.
Fyi, AppCenter works for many platforms (including android), not just ios

I upgraded to iPad OS 15 today. Just waiting to see how long before Roon crashes on it. iPad OS 13, iPadOS 14…iPadOS 15 up next.

Obviously, I am one of thee of little faith. When I can mention two annual iPadOS versions without a fix, can one really blame me for it?

If it works flawlessly with iPadOS 15 I’ll come back to eat crow, Somehow I’m not worried about that part.

Roon on iPadOS 15 doesn’t disappoint. It crashes just like it did with 13 and 14. I heard there’s a fix coming for iPadOS 39.

My crashes changed. From crashing after a while to crashing when returning to the app.

We’ve got a mesh wifi system, so the networking issue fix probably resolved it.

So the new crashes are when i’m listening to music then using other app’s, but when i return to roon it instantly crashes. When i start it up again it works fine.

I have given up on this ever getting fixed. Two months ago Roon support said they enabled diagnostics on my iPad Pro and they would be in touch. They never followed up and my replies are go unanswered. Given that the crashes have followed me through three major verions of iPad OS I’m assuming they can’t fix it and this is the way it’s going to be. Ditto for the broken Ipad Pro Magic Keyboard trackpad scrolling fail in Roon.

I’m retiring in March and that’s when my renewal comes up. Might be a good way to save some money. I can probably live with streaming Qobuz on the Naim app.

It’s a shame to hear this, I use an iPad Pro for Roon, I keep it up to date and have no issues. If the app ever does become unresponsive, I just clear it with a swipe and re start it. It puzzles me why some people clearly have an issue…

@dylan You see how severe this is to those affected. What’s the current status on this?