I select and play some music, read something else (Safari, Kindle…), switch back to Roon and it comes back blank.
And the display status is truly forgotten. If I touch the icon to see the queue it appears correctly, but if I touch it again to go back to previous state, nothing happens, it stays on the queue.
And there is no Back arrow.
If I shut down and restart the remote, it does come back to an album display, but the wrong one. 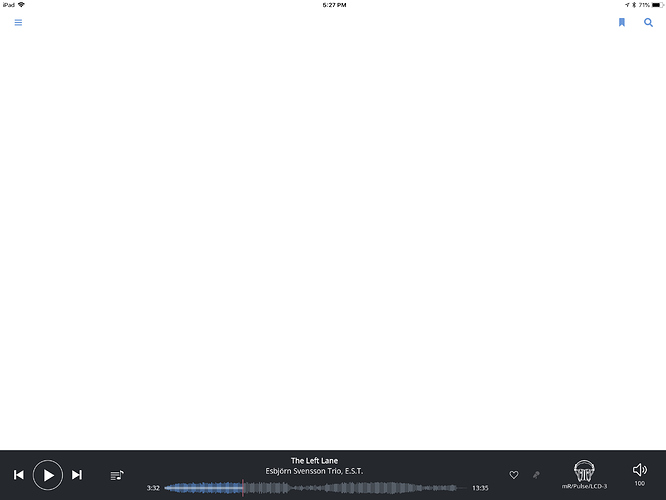 Hey @AndersVinberg – we’ll try to reproduce this, but I can’t think of anything that would’ve changed here.

What are you on when you select music then switch away? Album screen? Artist? Something else? In library or outside library?

Give us a few a few more details, and we’ll see what we can reproduce here.

I’m on the album page (tracks), hit Play, switch over to Kindle, half an hour later (Album is not quite finished) switch back to Roon to pause the music, and this is what I see.

Not every time, not reproducible, but more than once.

Pretty sure it’s only after the 1.5 update, but can’t swear to that.

It’s a little tricky, because my 9.7 iPad has developed another problem where it hangs, won’t even power cycle, first I saw it in Roon but later it has happened in Safari. So I was confused. But today this happened in the 12” which doesn’t have that problem.

Btw, I was listening through a MicroRendu.
It doesn’t happen when the iPad is the zone.
(So far.)
That’s logical, as the remote is busy, it perhaps loses itself when it is idle.