I bought an Auralic G2 specifically to be the best Roon endpoint I could afford.

And it is a very good Roon endpoint indeed, EXCEPT, I find music through Lightening DS sounds better (not night and day but enough to p1ss me off as I want to use Roon but also want the best SQ I can get).

I use LDS with a USB HD attached so I can see that taking the network out of the loop could cause an improvement BUT I also notice Qobuz sounds better which rather throws cold water on that theory.

Return it and buy a Raspberry Pi

I have heard that from others also. I have the Aries G1. I have not found that LDS sounds better to my ears but that could just be old ears. Roon obviously does some additional processing and could account for the SQ difference. At the end of the day for the money it might be the best endpoint out there, the silly buy a Raspberry Pi suggestion not withstanding. I think my G1 bests anything I have ever owned and that includes the Rendu’s and the Allo products.

I’ve since googled the hell out of the question “RAAT vs UPnP”, which I think is what we’re talking about here, and the general consensus seems to be that UPnP sounds better - but no one can decide why. I suspect it’s another FLAC vs WAV rabbit hole. In an age where people can hear a difference between USB cables, I suppose anything is possible.

Or is it implementation?

I understand expectation bias and something sounding better because you expect it to be, but I didn’t expect and don’t want LDS to sound better on the Aries G2 than Roon.

There seems to be very few who think Roon on a Naim system is any different than Naim’s UPnP so I’m presuming one can have them sounding the same through a product - as if anyone is going to notice a difference it will happen on the Naim forum where asset sounds different to minim and Melco rips sound different to dBPoweramp. I did a lot of listening comparing Roon to my QNAP TS-453 Pro running Asset during the Roon trial period. On local music I could detect no difference whatsoever. However on Tidal there is a considerable improvement over the Naim streamer doing the...

Have Naim just tried harder or succeeded better than Auralic?

Of course there is always the chance that LDS is just the pinnacle as people who prefer it on the Auralic forum seem to think.

There are some on Naims forum who prefer the SQ of UPnP and a lot of Linn owners state native Linn streaming sounds better than Roons even though it’s using the same OpenHome. I imagine everybody does their own tweaks here and there for UPnP and maybe these get bypassed for RAAT?

Hi John, i use two Aries primarily as Roon Endpoints. One G1 and one of the older Femto units. While i would have agreed immediately that LDS sounded noticeably better a year ago or so, today (with firmware 6.x.x) i cannot tell the difference…
Can you try and describe the difference in audio that you hear? Or could it be that this is an urban myth that is grounded in the previous worse implementation of Roon in the Aries FW?

Ah, I’m no good at describing sonic differences and there’s specific things I listen for and others that bug me more than others.

It’s that sort of change in presentation that a cable change might bring.

If you put the proverbial gun to my head I’d say there was a slight element of digital hash removed, if that means anything to anyone but me!

Not night and day and I don’t know how much I’d bet on myself telling the difference blind.

Then again we have people who can hear Roon 1.7 as better SQ and others as worse.

I suppose I shouldn’t complain, I have a system sounding particularly sublime tonight listening to the Comet is Coming 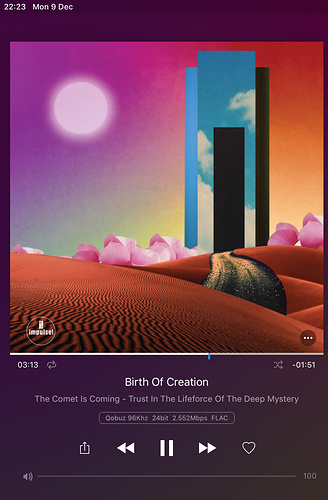 It’s the perennial question is the glass half full or empty.

Neither. It’s twice as big as it needs to be…

I bought an Auralic G2

This is a bit ambiguous. Is it an Aries or Vega?

My understanding is that on the Vega, Auralic implemented feeding RAAT into their DSP engine, so you get the LDS colouring. From their forums, I believe this is still coming for Aries, but not yet delivered. I could be wrong here, however.

Basically, you like the sounds of their DSP upsampling. With Roon feeding the device via RAAT, that’s getting bypassed. You could perhaps emulate the effect through Roon’s own DSP engine.

But you are probably best asking about how Auralic processes RAAT over on their own forums. Their head guy is pretty active there.

(FWIW, I have a Vega G2 that I only use via Roon, and have been very happy with it.)

Over on the Auralic forum people generally seem to think LDS sounding better than Roon is a good thing and shows how good LDS is. I see it the other way as a possible poor implementation of Roon by Auralic (well a slightly poorer).

X has replied more or less saying with 6 they are very close but there can still be some differences due to RAAT vs openhome different ways of doing things.

I would say the sound quality better Roon RAAT and OpenHome (Lightning DS) mode with our latest device are quite similar with under 6.x firmware. Please keep in mind due to the difference of different technology, they can not sound exactly the same....

Again, with earlier firmware versions, they had to send the RAAT stream straight to the DAC chip. RAATBridge (the “embedded” RoonBridge) then added the hooks for them to process the raw stream before sending it to the DAC chip. This was implemented in the Vega first, and allowed their various filter options to work. I guess they’ve now got that working on the Aries as well. At least this is what X has said over on their forums in the past to explain the difference in sound and why things have changed with later firmware versions.

Of course, I put most of the “LDS sounds better” folks in the “subjective confirmation bias for their hardware purchase” category. Keep in mind that Auralic’s upsampling and filters are ADDING colour to the sound. Maybe you prefer that colour, maybe you don’t. You could also add colour using Roon’s own DSP engine. (FWIW, I run my Vega G2 with the “Precise” filter, which I believe has the least colour of all their filters.)

I have virtually no experience of Auralic, but my experience with Naim streamers is that at first, I thought UPnP sounded a little better than Roon. This was with my Atom, as it has native support for Roon, but being considerably less revealing than my main NDX based system, I was reluctant to declare a conclusive finding. I now have a new NDX2 in my main system, and first impressions here are that Roon and UPnP sound pretty much the same. This is over a network connection, and that involves a quite number of hops between various switches, etc.
I suspect you might be right to suggest that implementation can make a difference here. Something I picked up from a fellow NDX2 user is that Roon is set by default to a maximum sample rate of 32 bits, and changing this to 24 bit seems to help. Probably Naim specific, but my point is that eqipment matching, setup, network implementation etc. can all have subtle (in my experience) effects on performance, and if you can be bothered to experiment a bit, there may be gains to be made. But beware of stoned blue caterpillars, dodos, march hares and cheshire cats…

It’s my understanding with the Aries if I’m not up or down sampling the filters are not activated so I don’t think it’s colouring.

Maybe it’s negative expectation bias, I am Irish after all

I use a G1, and really, really want Roon to sound as good as LDS. I feed both Roon and LDS from the same network-based hard drive. There was an upgrade last year in the way the G1/G2 handles RAAT, and that made an improvement.

But to my ears LDS still sounds better. I try to convince myself that it is simply confirmation bias (from reading about other’s experiences), but when all is said and done, LDS sounds less “digital” to me.

Maybe it has something to do with the extra server that Roon requires? Maybe there’s some kind of interference that the extra server produces in my environment? I have found that setting “Bypass All Filters” on the DSP page in Roon makes Roon sound closer to LDS.

This will drive some people nuts, but on a PS Audio DSD one can confirm “Bit Perfect” delivery of a particular test file. Both Roon and LDS pass that test. So whatever is making the difference has to be coming from interference via ground loops or in-band noise. When talking about 24-bit resolution, one is talking about a theoretical 144 db of dynamic range. There’s room within 144 db for the very most subtle noise/interference-related injection. Maybe that’s what some of us are hearing?

Regardless, bottom line, for me in my system, LDS remains my choice for critical listening. Roon suffices otherwise.

You are basically correct i believe, but DSP in this case that does not mean “malicious tweaking of the digital stream”, it merely said that Roon RAAT were introduced into the streamers processing in the same way as the other “sources”. (That was not the case previously, as you said)
One difference still, is that Auralic cannot cache the Roon stream as they do with UPnP material.

I’m also thinking, the difference to me is miniscule, if any at all. And i am running both Minim Server/Twonky on the same NAS as my Roon Core. Perhaps that might explain the very similar performance?

I have two recommendations;

Of course, this was in my situation, my ears bla bla…

I found the difference using Lightening DS rather than minim on my NAS.

As I said previously I had thought the difference was due to the music store being local until Qobuz also sounded better. I don’t think the Qobuz is cached, is it?

So I’ve been late to Roon (only using it a month now) and I agree that the Aries G2 sounds different with lightning and local usb drive vs Roon endpoint. I actually prefer the sound on Roon (Aries is between a Rock and a Denafrips Terminator in my case, over wifi). That configuration is slightly more neutral to my ears and the mid-range presentation is more correct and deeper to my liking. Lightning is a little more forward, which may work better for some.

The difference isn’t huge, as others said. The Roon is a little more relaxed, with no loss in detail IMO. Stage width is the same for me with multiple amps and cans and speakers. Depth, though, is better with Roon for me.

Funny, I have an Aries G2 and love the sound of the Aries using Lightning. I find Roon quite fatiguing after a while and just can’t stick with it.

This discussion never gets old, does it?

If you had a Minim/UPnP server delivering the library content to the G2 rather than a local USB drive/Lightning server i doubt you’d hear any notable differences. Your comparison suffers in the manner that with the Aries acting as both a server and media supplier it will spend resources which, according to Auralic themselves, will lower sound quality.

Separate your server from your endpoint and your “troubles” will go away!

Still, if you have a preference, stick with it! Just enjoy the music!