I have noticed some classical music labels, like Decca and DG, have included blu ray audio discs alongside and included within conventional CD sets. Like the following which just got released 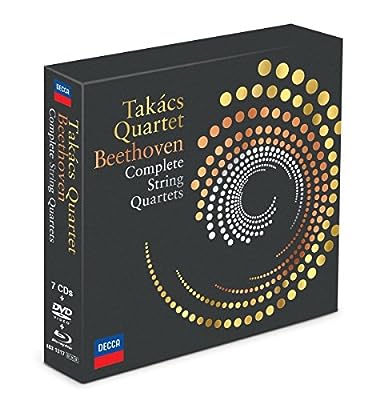 I dont have any capacity to rip blu ray yet. Is it worth me investing in it?

I have a lot of Bluray Audio discs, maybe 30 (that’s a lot). I bought the first classical releases out of curiosity as well as a bizarre wish to support new initiatives in high resolution. There are some marvellous releases which are not available in high resolution elsewhere, but they seriously crippled the format by never releasing surround mixes, even when the recording was originally done in surround (i.e. Chailly’s Mahler and Mullova’s Beethoven/Mendelssohn). I have just got the Mullova SACD, which was its original release, and look forward to doing a comparison of the stereo quality. But as above, the BD-A doesn’t include the original surround mix, which is lame.

Ripping BD-A is a pain, but not quite on the scale of SACD. For Mac: you need a BD drive compatible with your computer (watch out, they aren’t all compatible with Mac), MakeMKV and DVD-Audio Extractor. For PC, no idea, but something similar, probably including MakeMKV which is rather unique and is cross-platform.

You save a decrypted backup in MakeMKV (which takes a long time), then open that in DVD-Audio Extractor to convert the audio to FLAC (which is quicker). For some BD-A discs you will need the paid version of MakeMKV, because it has the highest decryption power. This is the case for the Karajan Strauss box for example.

I do agree that there’s little point in offering the BDA without the surround version but, even if the surround is included, the offering is unappealing. The marketing of these sets is annoying because one gets multiple copies of the performances with the attendant unnecessary bulk and cost. If I want the BDA, I cannot avoid getting the CDs that I do not want. Others may have the inverse problem.

Thanks guys. What do you think about Karajan’s Beethoven Cycle, his Strauss work, and Kleibers DG recordings? They can all be had in blu ray discs.

Fair points, but note that most BD-A releases up to now were single discs, although those rather wasteful CD + BD-A sets are proliferating indeed. I even have an SACD + BD-A set.

The Karajan 60s cycle is on BD-A and also his last 9th symphony. If you don’t have them already it’s as good a way as any of getting them in high res.

Fairly sure the Kleiber and maybe also some of the Karajan is available as download. Check carefully especially prices. Make sure you are comparing like with like and factor in software and time costs for ripping (if you care too).

I haven’t seen the Karajan Strauss box as a download at all yet. They’re marvellous performances (and that’s coming from someone who’s not a massive fan of either Karajan or Strauss).

Thanks all. Where would be a reliable place to download DG high res from? I dont trust a lot of places like Quoboz for the mainstream labels as I reckon half of them are jus upsampled or whatever.

Same for the wold Kempff stuff, where can you get that frm?

I trust HDTracks and Highres.com. They had problems in the beginning but I think they have secured the process running from labels to distribution to ensure the files is not upsampled.

I trust HDTracks and Highres.com

You mean HighResAudio.com, right? Another one that is looking interesting: ProStudioMasters.com, which has some small labels, especially jazz (eg. Intakt) and classical, that don’t appear anywhere else. One hassle is that now the same album often appears in all of them (new ECM and DGG releases for example) and it takes a while to figure out the best deal, especially since they don’t arrive at the same time and HDtracks and ProStudioMasters have time-limited discounts of various kinds. Also, HighResAudio is based in Germany and some of their issues are region-limited. Anyway, this is good because competition from HighResAudio and ProStudioMasters might make HDtracks move faster to put up the latest releases. For a while, they were really slow with ECM in particular, but they seem to have perked up recently. Back to the original poster’s question, rather than screwing around with ripping BD-A, which sounds painful from the explanation, it’s available in 48/24 FLAC on ProStudioMasters for $51.99 (limited-time sale), and on HDtracks for $60.98 (but it’s a new release and there’s a current 15% discount code for new releases, so it’s actually a 15 cents cheaper than on ProStudioMasters). I don’t know if/where it’s available outside the US, it doesn’t seem to be on HighResAudio, and I don’t have Qobuz because they don’t sell to the US. The physical disc set that started this discussion is $40.29 on Amazon US, a bargain if you have Prime and don’t take into account the hassles of ripping it.

I rarely use HDTracks nowadays since they are so slow to release new albums from ECM and others. Besides releasing albums quicker HighResAudio.com has the advantage of re-downloadable albums, and you can also stream these albums from Audirvana Plus. Thanks for the tip of ProStudioMasters.com. I will check it out.

If you often search for high res audio, I can recommend

I can’t say if it finds all versions or all shops, because there are too many to count, but I often use this search engine for a quick first look.

i definately wouldnt trust any of these sites either - all dodgy.

Thank you very much for this link @Music-Friend

i definately wouldnt trust any of these sites either - all dodgy.

Can you say more? Very sweeping statement, specific data would be useful.

they dont seem to be supported per se by the labels and 24 bit might not even be a viable concept for the old stuff.

sites like eclassical.com (run by BIS) and Channel Classics who will soon be offering dsd downloads are definitely worth it

they dont seem to be supported per se by the labels and 24 bit might not even be a viable concept for the old stuff.

sites like eclassical.com (run by BIS) and Channel Classics who will soon be offering dsd downloads are definitely worth it

They are obviously authorized by the labels (like any record store or Amazon are), otherwise they’d be infringing copyright, which the labels never tolerate. 24 bits is ample for anything recorded by microphones, as the pain-free dynamic range above achievable noise floor is at most 21 bits. Some other recordings may have even less dynamic range than that, but so what, if the low-order bits are dithered properly there’s no problem, meaning that’s all anyway you can get from the original master. For recent issues, which is really what I care about, they are digitally mastered anyway so whatever comes out of that is what we get. In that case, 24 bits is just a convenient standard, even though it’s more than any recording from acoustic sources needs.

You did not give any evidence for your derogatory assertion about those other sites, just your discomfort about their not being “supported per se by the labels,” as if the labels had over the years proven themselves paragons of product transparency, for instance https://www.mattmontag.com/music/universals-audible-watermark (from sources I completely trust, this is real for at least some material on some major streaming services; whether it also affects downloads is uncertain, as of a recent private discussion).

I’d rather not go into the DSD vs PCM argument. There are good and bad points from both sides, but the bottom line is that it’s the whole process from mastering to DAC that matters way more than the particular digital encoding between source and destination. I’m happy that classical lovers partial to DSD will have some additional download sources, but much of that is irrelevant to those like me who mostly buy new music, both scored and improvised, which often comes from very small labels.

If you often search for high res audio, I can recommend

I can’t say if it finds all versions or all shops, because there are too many to count, but I often use this search engine for a quick first look.

Thanks again for the link, this is awesome. Just used it to find a jazz album that I had been recommended, Presto Classical had it at a better price than HDtracks. My music shopping has just got more competitive

BTW, it was a Nonesuch 48/24 release, seeing quite a bit of that format in recent releases, wondering if it’s a spinoff from BD-A production.