Is Bluesound Node 2i Roon Ready?

Confused on what is happening RE Bluesound Node 2i certification as Roon Ready. Bluesound website silent. Thought I saw topic on Roon website earlier but now nothing appearing that answers directly when search. Any info or direction to proper “Topic” appreciated. Thanks from a new Roon user.

P.S. I have noticed several devices, like MOON MIND say on their website that Roon ready but does not say that on Roon Website. Does Roon website not stay up to date (that would seem to be strange Roon would not want to tout maximum number devices Roon Ready at any given point in time…).

It is Roon Ready and yes, the website can be a little slow in updating (although the partner matrix does have the Moon stuff and my Ace works wonderfully with it - check out the matrix here https://kb.roonlabs.com/Partner_Devices_Matrix )

I suspect that the website hasn’t had an update for a while, or that if it has, a lot has been missed out

For what it’s worth, I’ve literally just boxed up two Bluesound Pulse Flex 2i speakers to return to the dealer because they had massive connection issues with the network and, worse still, sync issues with stereo playback. They were absolutely unusable, but it may just be that I had a dud unit that’s affecting the sync on both. Either way, my Roon & Bluesound experience has been poor and frustrating

edit: by the way, I feel I should point out that the Flex speakers also had the same problem when using the BluOS app, so the fault lies with the speakers and not Roon! My Roon experience in general has been excellent

IDK but Roon stopped seeing my Powernode2 last week after the latest firmware update. I emailed bluesound support but haven’t gotten a reply. I was hoping this was just an isolated problem until I read this.

Bluesound support is so slow and pretty useless in my experience.

I have a similar experience. Bluesound Node 2 and Powernode 2i have been very problematic indeed - both when wired and wireless. As I don’t have any of this with my non-Bluesound nodes, I believe Bluesound to be the problem.

I have the very latest BS update and of course the just released Roon update - problems persist. I would not recommend BS as a Roon endpoint.

Are you talking about a firmware update in the PowerNode2 or the ROON update?

Don’t want to jinx myself, but ROON is still seeing my PowerNode2.

Firmware on the Powernode2.

I had to update it because wifi and bluetooth stopped working on the last release. Now those work but roon doesn’t see it (even with ethernet plugged in).

Thanks, I will avoid doing any BlueSound updates for the foreseeable future.

what version are you running? 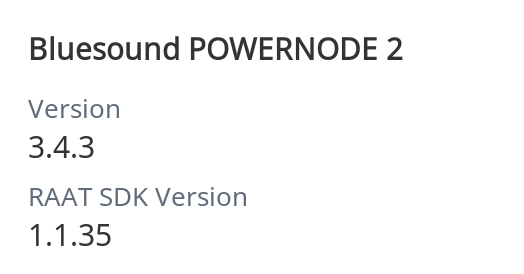 I returned two new Node 2i units that both developed problems shortly after purchase. I used them for wifi streaming with S/PDIF output bypassing the internal DAC. The first one started to emit an electrical shorting sound. The second one had problems sustaining its wifi connection even with a very strong wifi signal. On a reference system I also found both to sound a bit bright with an upward tilt in the frequency response. Too bad…

Does the fact that a Bluesound Node is “Roon Ready” mean it can be grouped together with my other RAAT capable devices (OPPO UDP-203 and Raspberry Pi’s running Ropieee)?

If I get a Node, will it be able to be grouped up with my other zone’s?

I can group my Auralic Aries streamer and Node 2i so I assume general answer is yes, although I am not familiar with the “Raspberry Pi running Ropieee” and whether that is somehow a special case.