Is it worth adding Tidal when I already have Qobuz?

I have a large local library, but I currently supplement it with a Qobuz subscription. I was wondering if there is a tangible benefit especially when it comes to discovery and maybe Roon Radio by having a Tidal HiFi subscription as well? Is there more variety when I have both? I’m curious what the community’s thoughts are on this. I can also get Tidal for $1 off if I bill through my Plex account as I have Plex Pass so it may be worth it just for that alone. I am currently trailing the lower tier HiFi plan through Plex for 30 days as I get a lot of hi res content from Qobuz and this would certainly just be a backup. I’m curious if anyone has thoughts on this. Thanks!

Unless you think MQA might be better (warning: religion), the argument is that there are albums you want that are available in one and not the other. For me, there are a few. I do find it a little absurd that I spend another $120/year (on the Best Buy US 1/2 price Tidal subscription) for a few dozen albums that I could just purchase and rip, and a few new releases that cascade first to Tidal. In reality the only reason I actually do it is because Tesla is integrated with Tidal and not Qobuz. So maybe I’m spending $120/year because I like my Tidal auto-mixes, and Tesla integrations are so good that it seems like a hassle to bother turning on Bluetooth and using Arc.

I had both for years, eventually dropped Tidal as it didnt provide what I needed and wasnt worth, imho, the subscription.

You just have to try it for yourself and decide.

Started with Tidal (well Pandora actually…lol).
When Qobuz released in USA switched to Qobuz.
Last year went back to having both.
Simply because for my chosen music genres I found holes in both catalogs and decided it was worth it to myself.
But everyone use case will be different.
SQ?
Was not even a remote factor in my decision.

For certain genres it is worth it imo.

For me that is electronic and international artists.

For some reason, quite a few electronic artists skip Qobuz entirely and on the international side, particularly Japanese and Korean artists are only on Tidal.

One thing I will say, I never find something that is on Qobuz and is not on Tidal. If you were ok with CD quality (or MQA) then Tidal has better coverage.

One thing I will say, I never find something that is on Qobuz and is not on Tidal. If you were ok with CD quality (or MQA) then Tidal has better coverage.

Yeah, this is what I really wonder… are there any gaps in this direction (Qobuz has something Tidal doesn’t)?

Context: While I do prefer Qobuz SQ vs. MQA, I’ve found that if I force redbook / “hi-FI” downloads on both, I have a hard time distinguishing. I’ve always been willing to put that down to mixes as much as to MQA. So have always wondered if I should cancel Qobuz, despite the fact that I do prefer it. Don’t need to pinch those pennies, but if I did…

One thing I will say, I never find something that is on Qobuz and is not on Tidal.

Again I think that is genre dependent.
I have a lot of prog rock that is Qobuz only and vice versa so…
You pays yer money and takes yer choices.

No doubt it’s genre dependent. Should of clarified I haven’t found something, others may have.

I know I’ve seen in the past people talking about Qobuz having better classical coverage.

The best way to test this is transfer your library over, set Qobuz as the preferred service and when you see album suggestions from Roon, that’ll be the best indicator (in my opinion).

For electronic albums, I often see the Tidal icon.

I currently have both.
I prefer Qobuz streams to Tidal.
My digital library split looks like this: 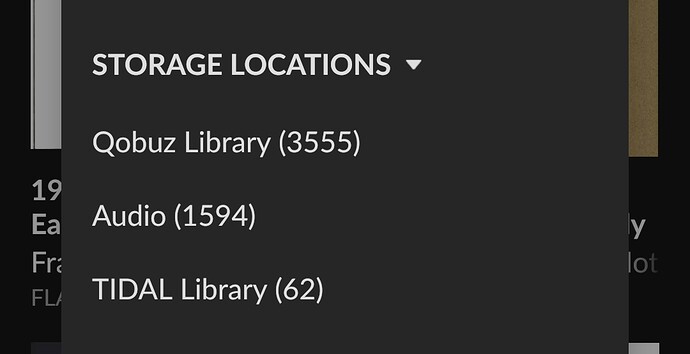 Thanks for all of the great feedback. I’ll try Tidal for a few months. I listen to a lot of classic rock, prog, art rock, alternative, experimental rock and metal associated with those genres. Qobuz definitely has some gaps with some of the newer (mid 90s - onward) artists so I’ll give Tidal a shot for a bit. Billing through Plex saves me a dollar so I’ll see how it goes. Thanks!!

It’s become much better in my experience. My thing includes much 80ies/90ies alternative/indie and when I switched from Tidal to Qobuz 2 years ago I was kind of shocked how many seminal albums were not there. In the time since, nearly all gaps closed for me and now it’s just some individual albums in rather rare cases.

The last one is perhaps the most bothering to me. Whole generations are listening to music changed from the original, similar to the ‘Solo shoots first’ in the re-edited Star Wars Ep. IV. And, they have no way of knowing that what they are listening to is not the same as what made the artist/album/track famous in the first place.

For an obvious example, if you go to Qobuz or Tidal and listen to the first track “A Dream within A Dream” on “Tales of Mystery and Imagination”; you will hear the track open with narration from Orson Wells. However, that is not the version that was on the original album for over a decade. If you own the original release this is what you would have heard

**Tidal has albums in AAC format for example.

do they have it in the format I want

Now I’m on android I much prefer having the 24/48 version and also it’s just irritating from the the point of view of “why would you even do that?!”

The same is true of Atmos, quite a few albums have been in Atmos on Apple Music and just MQA on Tidal (Fred Again… is the most recent example for me).

Having used Tidal and Qobuz for several months, I find myself using Qobuz almost exclusively. It recommends music that I listen and Tidal does not. Tidal’s algorithm is either poor or they’re trying to convince me that I like hip-hop.

Qobuz claims a library of “70 million high-quality tracks and more than 424,000 Hi-Res albums” and Tidal claims 90 million. I sometimes find that only Tidal has a song or album when Qobuz shows the album but the tracks are marked unavailable. This is a temporary and infrequent problem.

As for sound, I occassionally hear slight differences between hi-res Qobuz content and Tidal’s MQA version. Can’t really say that one is better than the other. I think the best way to not worry about it is not to have access to both. The FOMO will wear off.

So far, I’ve maintain both accounts because Tidal offers a legit first responder discount which makes it affordable to keep it.

If you don’t use Tidal how are you expecting it to know what you like, I don’t get any hip hop 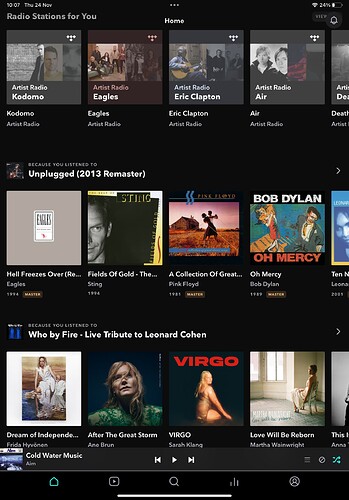 I am making the same decision myself. Just got a black Friday lifetime Plex subscription. Waiting for the initial local scan to complete.

The decision point for me is the relative performance of Plex and roon radio. I now have a lifetime Plex licence but I don’t think I will ultimately keep all three subscriptions, roon, tidal, qobuz although I will be running everything in parallel for a while.

I also had both and dropped Tidal. Don’t miss it in the least. I also don’t care about MQA. And I think Stripes acquisition of Tidal will slowly kill Tidal anyway in this tech market downturn due to culture and product mismatch. Was such a dumb acquisition.

What would make me consider Tidal again is if Roon would figure out a solution to stream ATMOS mixes from Tidal so it would work properly in home theater setups. That would be a game changer for me.

I started using Tidal a few years ago before I knew about Qobuz. It has always been heavy on suggestions that didn’t match the music I was listening to. I even emailed them about it. It wasn’t until a few months ago that I started using both services together. Tidal is great overall. And, like I said, the discount they offer means it only costs me 11 bucks a month which is appreciated in more ways than one.

I would welcome Atmos integration with Roon. Heard some Atmos through a 5.2.4 setup and was impressed. Also noticed that Qobuz’ Atmos content is exploding. My issue is that I can only stream Atmos content through my Sony tv…Qobuz isn’t listed as an app for it. So it’s Tidal for now.

I’ve had a lifetime Plex sub for years. It’s amazing for video, OK for music. You do get 1 dollar off of Tidal when billed through Plex though and that can be used in Roon. Plex is a good backup for Roon if the internet went down.