Is it worth adding Tidal when I already have Qobuz?

As far as I can see, Qobuz doesn’t support Atmos?

What have you been listening to on there ?

I went on Qobuz website and searched “Dolby Atmos” 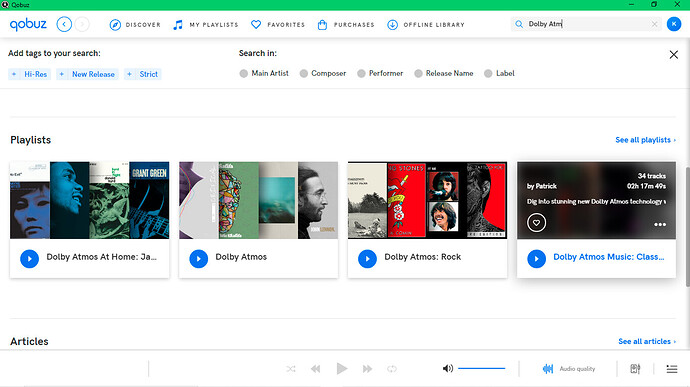 Those are user created playlists and they don’t contain any Atmos content.

Not sure why they created that given Qobuz doesn’t support Atmos but maybe it was a transfer from their Tidal accounts ?

Someone deleted my post here. I have both Tidal and Qobuz. I like them both and can’t bring myself to drop either. Both work well for me and I like MQA. I pay $120 for Tidal Masters through Best Buy and $130 for Qobuz Studio.

Having used both in parallel I just went with Qobuz as have already done a few others too. The reason is easy: larger library over time and still nicely growing, great app/recommendations and for those to which sound quality is very important Qobuz delivers a better performance.

…on the Best Buy US 1/2 price Tidal subscription

My 18-year-old son is home from college for the long US holiday weekend. There’s stuff he can’t find on Qobuz that he likes. I just added Tidal and he’s already found a number of things that he’s looked for in the past on Qobuz.

Suppose I’ll play around at some point with comparison listening but, for the moment, I’m starting off conservatively 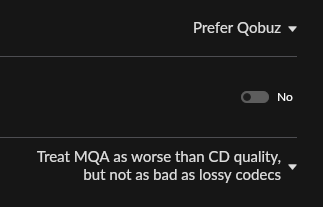 I’ve just made the switch to Tidal after a rather infuriating experience with Qobuz.

I keep all of my music in Soundiiz so that I don’t lose any even if one of the platforms don’t have it.

Here is the difference between the two when transferring all my music:

After being on Qobuz for almost a year, I have missed a lot of music.

To be clear my top genres are electronic and Indie music, both of which are weaker points for Qobuz.

Depending on what you listen to, it can be a huge difference or none at all. I think classical music listeners much prefer Qobuz.

My thing includes much 80ies/90ies alternative/indie and when I switched from Tidal to Qobuz 2 years ago I was kind of shocked how many seminal albums were not there. In the time since, nearly all gaps closed for me and now it’s just some individual albums in rather rare cases.

Inspired by this thread I went through my placeholder albums in Roon. These are albums that were neither in Tidal nor Qobuz about 1-2 years ago, and I didn’t have a CD, only vinyl. To have them in Roon, I created a flac file on some website with a computer generated voice saying “get the vinyl”. For each missing album I tagged the file with the relevant stuff and imported it into Roon, which duly identified it with some help. So I have everything in Roon, even my vinyl-only.

Anyway, there are about 150 of those, and going through them I see now that quite many, apart from the really obscure ones, have appeared in Qobuz and none in Tidal. Most of it is, again, 80s/90s alternative/indie.

Oh I C! Doesn’t make a lot of sense to me for Qobuz to even allow it on their site when they don’t support it? Maybe coming at a later date

They have confirmed Atmos is coming

The user made playlists don’t contain any Atmos content so they haven’t allowed anything to be there that isn’t supported.

Maybe Roon will offer support for Atmos then!

There is a feature request for it and because most of the streaming services will be supporting it within the next year (Qobuz is confirmed, Amazon and Apple are already there, Spotify is rumoured to be including it in a new plan), it would make sense for Roon to implement it.

This is a really good idea, will have to steal it

I have to admit, half my reason for writing that was to plug this great idea

The last one is perhaps the most bothering to me. Whole generations are listening to music changed from the original, similar to the ‘Solo shoots first’ in the re-edited Star Wars Ep. IV. And, they have no way of knowing that what they are listening to is not the same as what made the artist/album/track famous in the first place.

I couldn’t agree more. Some of the “Hi-Res” remasters of older material I’ve heard lately are completely unlistenable IMO.

For an obvious example, if you go to Qobuz or Tidal and listen to the first track “A Dream within A Dream” on “Tales of Mystery and Imagination”; you will hear the track open with narration from Orson Wells. However, that is not the version that was on the original album for over a decade.

While true, this one in streaming is the 1987 remix by Alan Parsons himself and labeled as such. It’s not great that the original version is not there, but this one should be there as well and is at least legitimate by the artist himself (even though making it may have been a mistake

) . There are worse examples.

I often see posts that Qobuz is better for Classical than Tidal. But I never see it mentioned the Francophone depth of the Qobuz catalogue. I love it for the French pop music that I assume Tidal doesn’t have but I will soon find out.

For now I’ve settled on Qobuz $12.99 and Tidal HiFi to fill any gaps (since I get Hi Res through Qobuz). Billing through Plex is $1 off for Tidal.

I would welcome Atmos integration with Roon. Heard some Atmos through a 5.2.4 setup and was impressed. Also noticed that Qobuz’ Atmos content is exploding. My issue is that I can only stream Atmos content through my Sony tv…Qobuz isn’t listed as an app for it. So it’s Tidal for now.

I would welcome Atmos as well. If you can run an HDMI cable from a computer to your AVR you can use Qobuz or Roon on your home theater and use the tv screen for an interface. I run Roon on a 2.2 configuration but could easily change to multichannel if there was a good reason to do so. Also, I think an HDMI connection is capable of higher resolution than an optical connection from the tv. Am I wrong? I have a 50’ hdmi from my computer to the media port on the AVR. Then I use a wireless mouse to make selections. Works great.

I think you are right in that HDMI allows higher resolution than optical. My thought is to wait and see who goes “Atmos-in” first, Roon or Qobuz. I am getting 4 in-ceiling speakers installed on the 1st, can’t wait to hear Atmos!